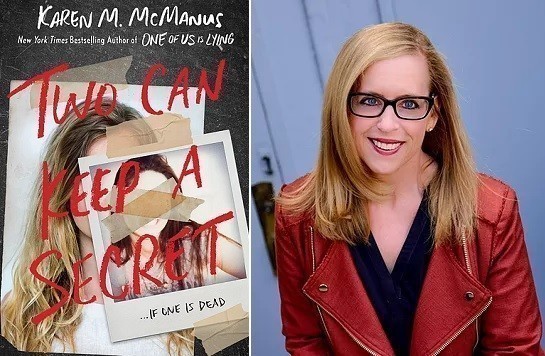 Karen M. McManus’ debut novel, One of Us is Lying, has become a major success. The YA novel hit the shelves in 2017 and after just a month, it became a New York Times Bestseller. It’s been on that list for a consecutive 65 weeks! Now, the author of the famed mystery thriller novel has a new book hitting shelves this January! We were lucky enough to get an advance copy of Two Can Keep a Secret. Here’s what we thought about it:

Review of Two Can Keep a Secret by Karen M. McManus

Two Can Keep a Secret by Karen M. McManus is a YA thriller mystery novel set in a small town called Echo Ridge. The town hides itself behind notorious scandals, including a disappearance and a murder of a homecoming queen. Ellery, whose aunt went missing back in the day, begins her story when she becomes the new kid at school in this crazy town. The book doesn’t just focus on Ellery though. Another protagonist, Malcolm, has a haunting past as well that readers learn all about.

There’s a main focus to this book that’s pretty straightforward as another girl goes missing. It’s a mystery novel at its best. However, there’s much more to it than that. This novel focuses on the secrets that everyone has. It acknowledges that even in the darkest times, it’s the connections between us that matter the most.

Going back and forth from the different perspectives gives readers insight on what’s actually going on. It feels as though the characters are speaking directly to you as you read about what’s going on in their lives. This book is very character-driven. A lot of detail and attention went into creating these characters and that’s what makes this novel absolutely incredible.

Readers will love unfolding this mystery and will enjoy finding out more and more about Ellery and Malcolm. Two Can Keep a Secret by Karen M. McManus is a must-read! Just be prepared because once you start reading, you won’t be able to put this novel down until you’ve gotten to the very last page.

We were honored to find out that Karen M. McManus herself was available to chat with us! We learned about her upcoming novels, her struggle with “Second Book Syndrome,” and how she once went bowling with Al Gore (kind of). Read the entire interview below: 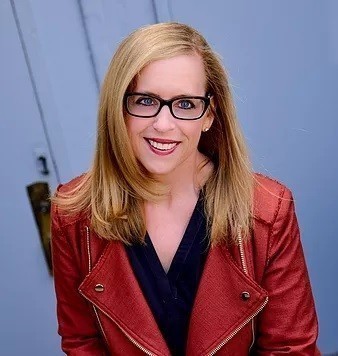 Tell us about yourself! What do you do?

I’m a young adult author who writes mystery thrillers. My debut novel, One of Us Is Lying, was published in 2017 and I recently transitioned to being a full-time author. I live with my 12-year old son and our rescue pup, and I spend way too much time on social media.

What is One of Us Is Lying about and why were you inspired to write it?

One of Us Is Lying is the story of what happens when five teens walk into detention, but only four walk out alive. The fifth student, Simon, was the creator of the school’s notorious gossip app and he was about to spill life-changing secrets on the other four. When investigators learn Simon’s death wasn’t an accident, those students go from being witnesses to murder suspects. The narrative unspools along two tracks: what happened to Simon and what happens to Bronwyn, Cooper, Addy, and Nate once their secrets are revealed and they’re under suspicion.

I got the idea when I was driving to work and the theme from the movie The Breakfast Club came on. I started to think it would be interesting to do a dark update of that concept, and the phrase “The Breakfast Club, with murder” popped into my head and stayed there.

Will there be a sequel to One of Us Is Lying?

Yes, I recently announced that I’ll be writing a sequel for publication in 2020 (current expected date is January, but that could change). I can’t say too much about the book yet, but it will feature new POV main characters, including Bronwyn’s younger sister, Maeve. There’s a new gossip game at Bayview High and a suspicious death or two. Bronwyn, Cooper, Addy, and Nate will be secondary characters in this one, but readers will see plenty of them and be able to catch up on their lives and relationships.

You have a new novel coming out soon! Can you tell us about Two Can Keep a Secret and why you were inspired to write it?

Two Can Keep a Secret takes place in a small town with a dark past, where history might be about to repeat itself. Echo Ridge looks picture perfect, but it’s hiding secrets: Ellery’s aunt disappeared there years ago and Malcolm’s brother is the suspect in an infamous homecoming queen murder. When a third girl goes missing and Ellery and Malcolm were the last people to see her alive, they go looking for answers.

I wanted to create a very layered, twisty story with this book. There’s one big mystery—what’s happening to the girls of Echo Ridge? —but also lots of smaller, more personal mysteries that characters need to unravel before they can understand their town’s secrets, and their own family histories.

Are there any other books in the works for you as of right now?

Yes, I’ll be writing another standalone YA mystery for Delacorte Press that’s currently slated to be published in January 2021.

What’s it like to have your novel, One of Us Is Lying, be a New York Times bestseller?

It was such a thrill when it first hit! I didn’t expect that at all, especially because it had already been out a month. So that was wonderful, but what’s even better is that readers have continued to connect with the book and its characters in a strong, sustained way ever since.

Journalism teaches you to look for the holes in any story, which is incredibly helpful when you’re trying to write an airtight plot. Also, because most of my books deal with high-profile crimes that disrupt ordinary lives, I tend to write a fair amount of faux news coverage as part of the narrative.

I start with the spark of an idea— “The Breakfast Club, with murder” or “What’s happening in Echo Ridge?”—and think about it until characters emerge. They’re the most important part of the story for me: who’s being affected, how do they react, and how do they change? Then the plot starts to take shape and I’ll capture that in an outline. My outlines used to be very loose but as I’ve written more books with complicated mysteries at their center (I’m drafting my fourth now), detailed outlines have become my friend. I don’t follow them to the letter, but they’re a helpful guide.

Which writers and/or novels have inspired you the most and why?

The Hunger Games is the book that first inspired me to try writing YA four years ago. I’ll forever be in Suzanne Collins’ debt for that. I tried writing fantasy at first, but realized it wasn’t my genre, and started reading more contemporary. I was very inspired by Becky Albertalli and Courtney Summers, both of whom have strong voices and memorable characters.

Writing my second book. Second books are notoriously hard for lots of reasons: first time writing under contract, first time writing to a deadline, lots of new voices (editor, agent, reviewers, readers) in your head. I wrote two drafts of Two Can Keep a Secret that I absolutely hated until I took a step back and reminded myself of the story I wanted to tell. Then it flowed, and I couldn’t be happier with how it turned out. But “Second Book Syndrome” is real.

Find writer friends at the same stage of the publication journey as you, and exchange work with them. My work improved so much by both giving and receiving thoughtful critique. Plus, writing can be very solitary, and it’s nice to have friends.

What do you want readers to gain the most from your novels?

My books tend to be somewhat dark in subject matter, but relatively light in tone, with a healthy dose of humor, friendship, and connection. I write books with this kind of juxtaposition for the teenage me who needed to learn how to stumble and fall, but get back up, and for any reader who could use reassurance that growth and hope are always possible.

Your writing career is flourishing! Where do you see yourself going from here?

Thank you! I love the two books I’m working on now (the One of Us Is Lying sequel and my fourth book), and I’m excited to finish them and launch them into the world. After that, I have several more ideas in the mystery/thriller vein that I’m eager to explore, but I also I hope to keep learning and growing as an author by trying new genres and mediums.

Publishing a book is hard at any age, but it’s also possible at any age. You’re never too young, or too old, to pursue the dream of being an author.

Two Can Keep a Secret by Karen M. McManus will be available to the general public on January 8th, 2019 wherever books are sold.