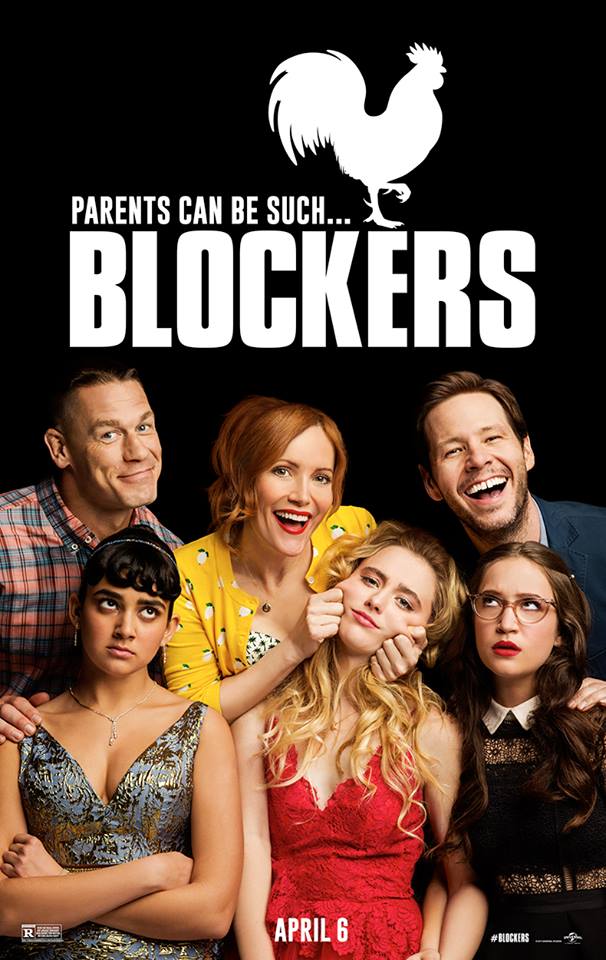 If you’re looking for a hilarious movie to see this spring, then look no further than Blockers!  The gut-busting humor in this film will have you cracking up in the audience, not to mention that John Cena, Leslie Mann and Ike Barinholtz make up an absolutely perfect trio of protagonists.  When three best friends, Julie (Kathryn Newton), Sam (Gideon Adlon) and Kayla (Geraldine Viswanathan) make a pact to lose their virginities on prom night, they think they’ll have the best night of their lives.  This plan may be a little more complicated than they had previously planned because when their overprotective parents read their texts, they decide to do everything possible to “block” their daughters. Blockers is in theaters now and it will not disappoint!

Mitchell (John Cena), Lisa (Leslie Mann) and Hunter (Ike Barinholtz) are absolutely hysterical helicopter parents. Mitchell, Kayla’s dad is a textbook overprotective father.  He’s threatening, possessive and not to mention he could take anyone out with a single punch, so of course Mitchell is very skeptical about his daughter going to prom with a boy.  Lisa and her daughter Julie are attached at the hip. When Lisa finds out that Julie is planing to lose her virginity, she fears that her daughter will make some of the same mistakes that she did when she was a teenager.  Hunter is the outsider amongst the parents. After separating from Sam’s mother, he tries desperately at all costs to bond with his daughter, who has cast him aside. Together, these three make up the dream team and steal the show with their witty banter and hilarious remarks.

Are these parents able to stop their daughters from losing their virginities on prom night?  See Blockers to find out, in theaters now!

The Scoop on My Set Visit to Ant Man and The Wasp
5 Lessons I Learned From #TheNutJob2
Kansas City: Get Your “Daddy's Home 2” Advance Screening Tickets
Everything You Need to Know About the New #WonderWoman Exhibit at Warner Bros. Studio Tour Hollywood
BlockersentertainmentJohn CenaMovies
0 comment
0
FacebookTwitterPinterestEmail