I am still coming off the excitement of my trip to LA for the Pete’s Dragon world premiere.  It’s been a busy few days since I’ve been back and I am so excited to continue sharing posts from my trip.  Today, I’m bringing you an interview with Bryce Dallas Howard.  I love being able to share interviews with people who are passionate and excited about what they are doing.  Without a doubt Bryce was one of those people.  She plays a very compassionate and kind woman in Pete’s Dragon and in my opinion that is very similar to her personality in real life. 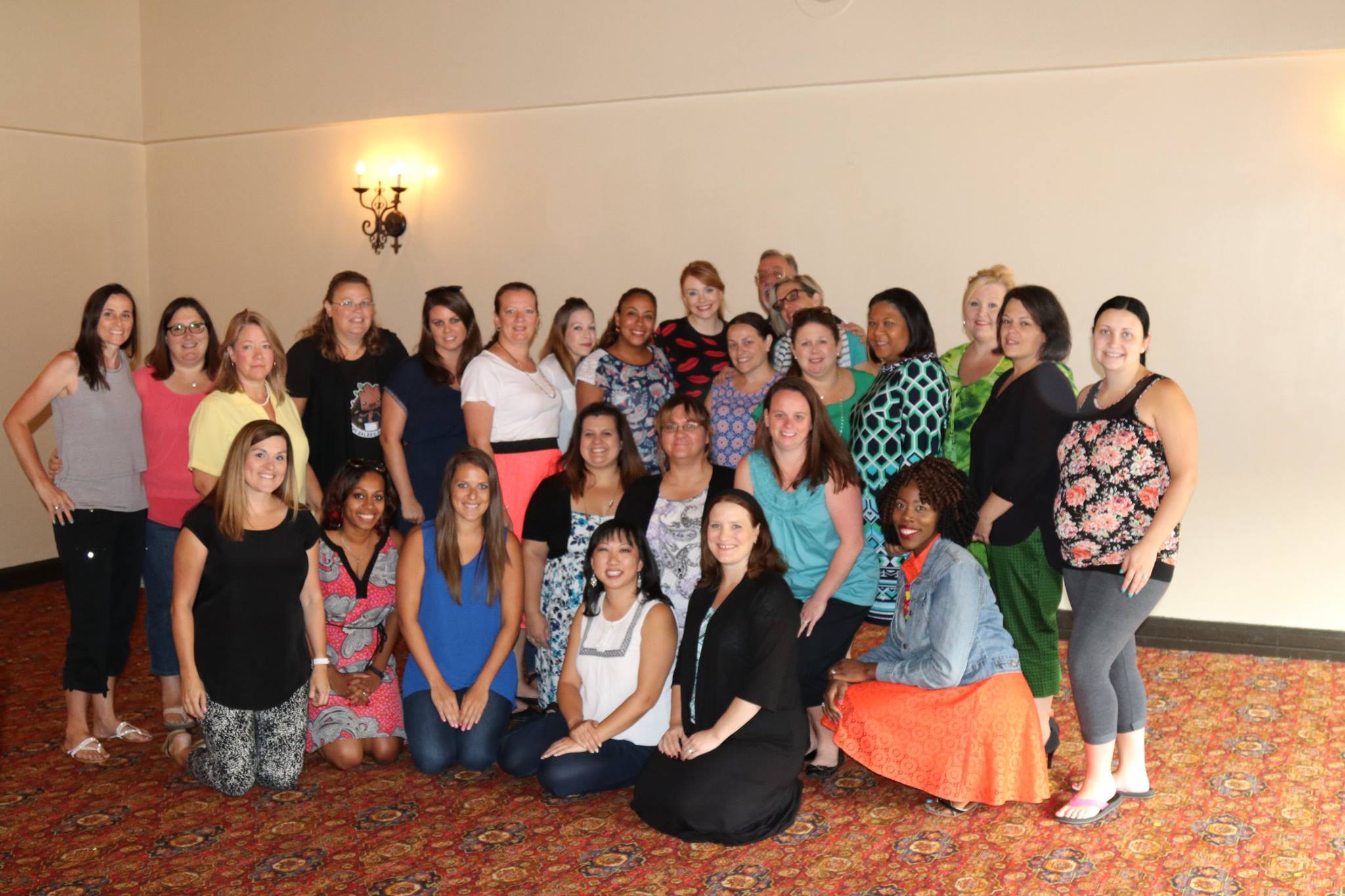 Read below for this fun Q&A with Bryce Dallas Howard.  But, I’ll warn you ahead of time…after reading her answers you’re going to want to be her real life best friend.  She is genuinely just a good person. 🙂

What is it about your character that you are you most like?

It’s really interesting with the Disney movies because watching them when I was a kid, I always identified with the child. Then reading the script, I just instantly was thinking about it from the perspective of being a parent. I was talking to my husband about it a lot because I didn’t want to create this complicated adult persona. I just wanted to really approach it simply. And he said something great to me. He was like: “Listen, you haven’t really played a mother.” I didn’t kind of picture her as a mother or an ideal mother at least. I wasn’t that. He just said: “You know, you’ve been doing this for almost 10 years.  Just (approach) this character with kind of the relationship and the dynamic you have with our kids. Just be with Pete in the way that you are (with) Theo and Beatrice.” Those are my kid’s names. It just made it really simple.

Oh my gosh! I stayed in the hotel last night and there’s a picture of him as a young man in the hallway.  I mean it was phenomenal. And watching the movie last night again, he’s such an environmentalist and he has just so much. When you’re around him, you feel so much peace because it seems like he has arrived at that place for himself. Being in this really serene environment and having these long, awesome conversations with him… I mean, it’s less a conversation and more just me peppering him with questions. It was incredible. He’s a family man and raising kids also in this industry and in this world.  He has a lot of perspective on that and it was just wonderful getting to learn from him and to be around him and admire him and see that he has the most incredible head of hair.

Did you have a favorite moment or scene while you were filming?

For me, it was definitely getting to ride on the back of Elliott.  I was just in hysterics that whole day.  And I was sitting behind Wes (Bentley) last night at the premiere and I just like grabbed his shoulders when we were watching it. We were just losing it the whole time because we’re adults and we have kids and just… we’re on a dragon! The way they set it up was kind of like this rig where we had harnesses on and you had to climb up. (We) were pretty high up. (We) climbed up on a ladder and it would move around like a ride.  So it was nice that they kind of replicated the Disneyland experience in New Zealand while we were shooting. It was really fun! 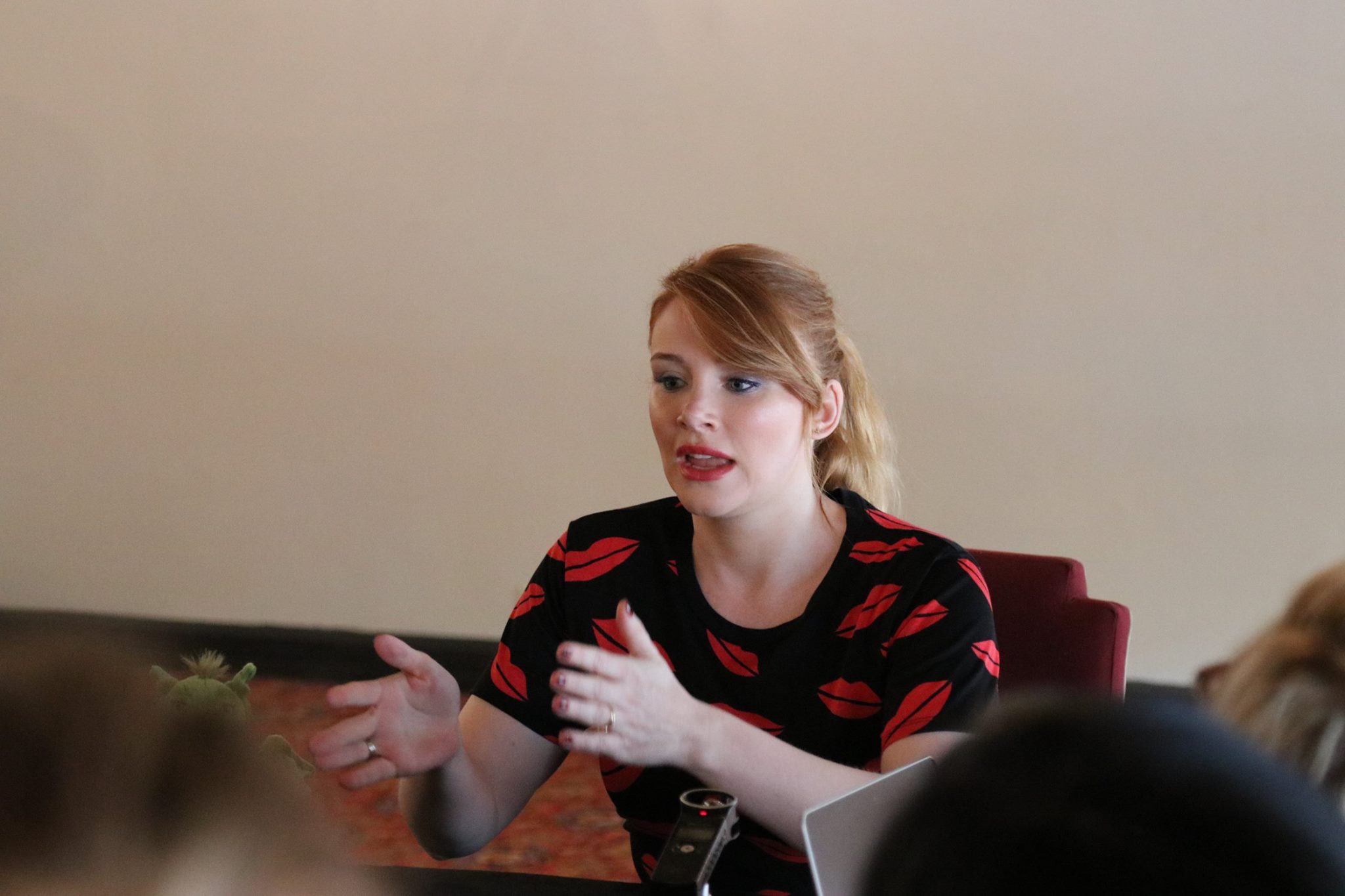 What is your favorite Disney movie of all time and why?

I haven’t thought really critically about that question but my first kind of thought is The Little Mermaid because it came at a time, I think I was in second or third grade. I mean, I was born in ’81, so I don’t know… whenever it came out.  My mom sets all of her stories when she was seven.  My dad’s always like “Everything happened when you were seven, Cheryl!” I could be doing that as well.

But I mean, (Ariel) had red hair; I had red hair…  I still have red hair.  It just was one of those movies that just came at one of those moments. I memorized all the songs and I used to do really dangerous things. I would put on a leotard and then I would tie my legs together and I would throw myself in the pool. I did it many times… so dangerous.  I actually have a memory of the last time I did this underwater, looking up and thinking to myself “this is really not good,” starting to panic really bad. I don’t think my parents know. I mean they couldn’t have known.  Now they’re going to know, but now they know a lot of things.

So, I think, I think it was “The Little Mermaid”.  Interestingly enough, David Lowery, the director of Pete’s Dragon, said the exact same thing.

What message do you want people to walk away with from Pete’s Dragon?

I think what has always occurred to me was that it’s, like so many Disney movies, dealing with loss.  I mean actually, it’s like a mother can’t survive right?  Every movie it’s so crazy. I think what’s really powerful about that… there’s this great Walt Disney quote that I’m just going to completely paraphrase here what he essentially was saying that “there can’t be light without shadows and that the Walt Disney films don’t shy away from that.”

Perhaps that’s, in a way, the power of those movies. That today, as an audience, they bring you to a place where it’s like… I can’t imagine anything more nightmarish as a parent or a child than dying or losing my parents from both perspectives.  I think that telling the story of after that kind of loss… showing what it takes to find your family, that there is a family out there even when you’re orphaned.

I think that’s a really powerful message because we all experience loss and will experience, eventually, the extreme loss of losing our parents. Another thing that just occurred to me over time is that Disney films seem to be 50% entertainment and 50% therapeutic. You sort of practice those emotions as a child and you go through that experience. In a way, this is sort of what I think stories are meant to do: prepare you for what is ahead; prepare you for the commonalities within the human experience. I think that seeing that journey and that adventure of finding your family in the midst of having bonds that completely seem impossible or unconventional… His best friend being a dragon.  I think that really is a power, definitely a powerful message: Simply telling stories that intertwine or integrate the imaginary world and of the mystical world with the real world.

For kids and adults, it allows us to transcend the daily grind of reality and reminds us to look for magic… to look for something that can make you believe that the supernatural exists or that there’s something beyond.  And it’s not in a religious sense at all or even a spiritual sense.  But, I think we all have that kind of sense of wonder and awe within us. I think that that does something for kids. My favorite question to be asked after a screening is from a kid saying “What was it like working with Elliott and where is Elliott right now?”  Just to keep that alive… I definitely treasure that.

What was your first emotional response when you saw the finished movie?

I watched it with my husband and we were really emotional very early on.  The first reaction honestly… I turned to him after the first five minutes and I was already crying. I was like, “Is this okay?”  And he turned to me and he said, “Not for me it’s not.”  I think just the power of being in the movie and then being able to watch it and experience it in a way that it was intended to be experienced… I think that definitely caught me off guard.  That was my first reaction. I was really moved by it and surprised by how much. 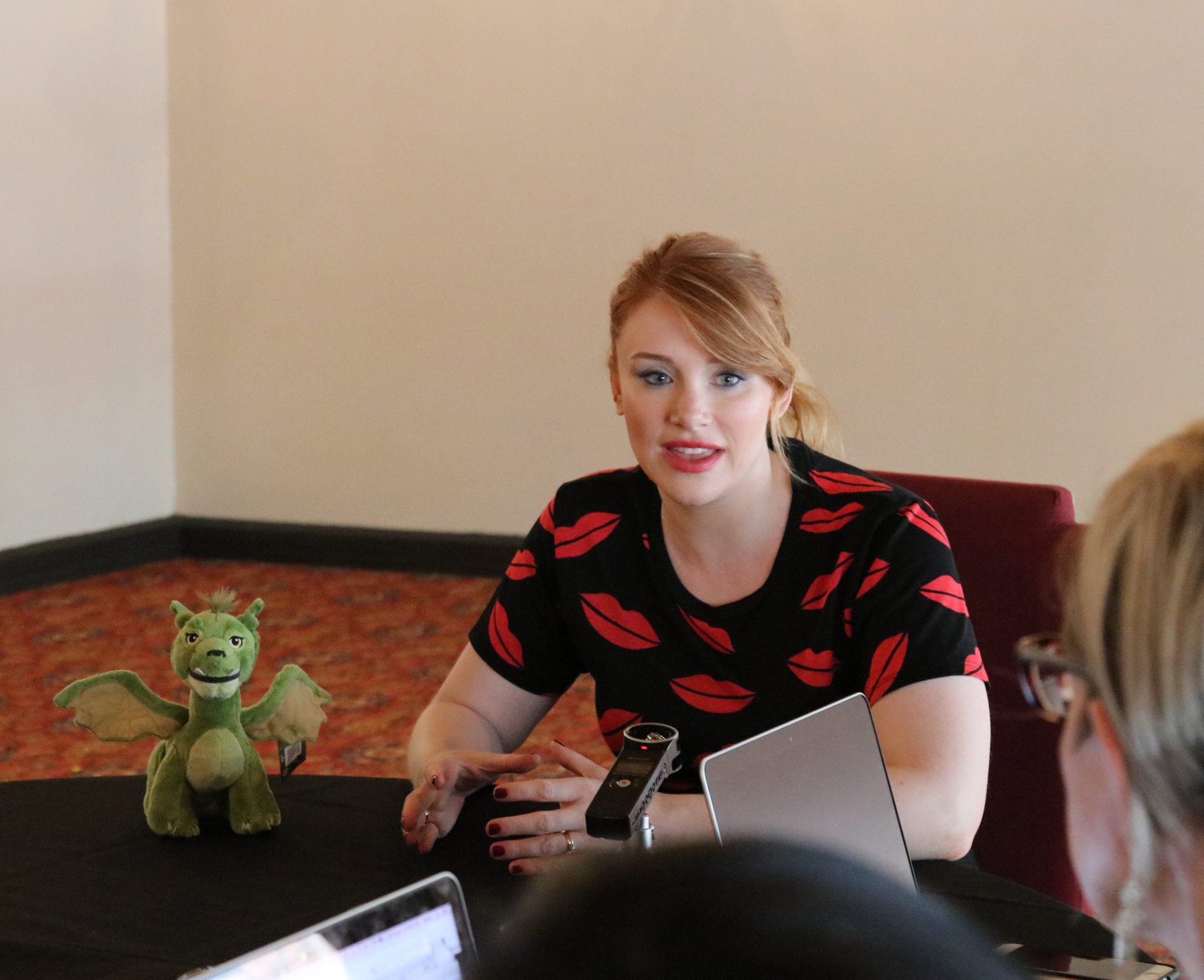 Was there a defining moment while shooting the film that you felt like you were part of something incredible?

Other than riding on the Dragon, there was one day in particular where we were walking into the woods. The best thing about New Zealand in my opinion is that there are no predators so you can go into the forest and you’re really not worried. There are really no predators, no snakes… nothing.  The other thing is that in most places, it’s very difficult to get an Internet connection.  So those two things work together beautifully.  There was a day where we were shooting in the forest and Bob was there, Oaks was there, and Oona. I just remember looking up and it was just kind of perfect. It was idyllic. No one was on their phones and it felt like what the movie looks like when you watch the movie.  It felt like that kind of innocent, sort of perfect moment.  I’m realizing the older I get how much of a privilege that is.

I asked my daughter recently, “Do you want to grow up in nature?”  She was like, “I do; I am growing up in nature.”  I was like “Girlfriend, that’s Astroturf in the back!”  Really being there, being in New Zealand… it’s consistently ranked as one of the best places to raise families in the world.  And I realized why.

It’s kind of shifted something for me as a parent in terms of my priorities. I think having those experiences, being surrounded by nature and being in a serene state where there is no fear and you could just kind of be there… I really want that for my kids.  I had that so much as a child.  I grew up in Connecticut in the woods.  It’s a crazy. We were growing up and you had parents think “Oh! Back when I was a child, we could walk here.” And I’m doing the same exact thing! “Nothing is going to change; We are as advanced as we’ll become; I’m not going to be like my parents and say that kind of stuff!” But, we always yearn for our childhoods and we always yearn to either to transform it or to give it to our children. So, that’s that.

You can watch Bryce in Pete’s Dragon.  She did amazing in her role and after this interview, plus watching the movie I am an even bigger fan of hers. 🙂

Catch Pete’s Dragon in theaters today! Make sure to check out the official trailer below!

Free to Be Me : Details On How Carefree Pantiliners Can Help #Sponsored