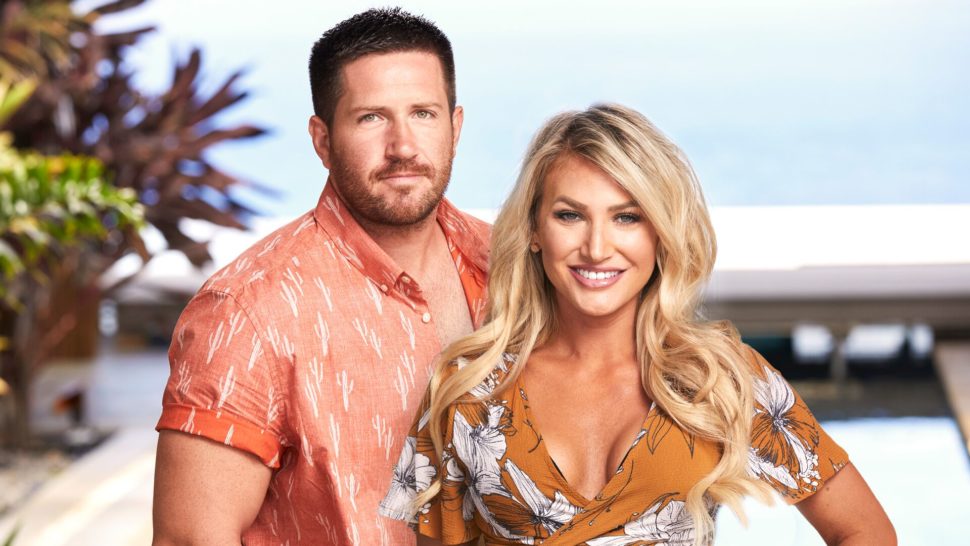 Temptation Island is a new show on network. Couples have the opportunity to test their relationships by separating and dating singles who are also on the show. John and Kady are one of those couples testing their temptations in hopes of finding clarity about their relationship. Here’s the scoop on their relationship and the reasons they joined the show.

How did you meet?

Kady – “We met on Bumble. It’s funny, because we actually didn’t talk that much on the app and we were both casually dating around. A couple weeks had gone by without us talking, then all of a sudden, he came across my Bumble feed again and I swiped right once again. I immediately messaged him and asked if he had deleted me, wondering why he showed up again as a possible match. He said he “deleted the app” but regardless, his tactic worked and we planned to meet up the next night. I showed up at his house with an overnight bag and my dog. We hit it off and I ended up staying the entire weekend and didn’t leave until I had to leave for work Monday morning. The rest was history.”

John – “Kady and I matched on Bumble. I actually deleted her cause she was too slow in responding and we re-matched LOL. When she asked if I deleted her, I lied and just said I deleted my account and rejoined. I convinced her to drive all the way from Las Colinas, where she lived at the time, to my house in Fort Worth. She asked me if she could bring her dog and an overnight bag, just in case she drank too much and couldn’t drive back. I took her out for sushi and then we went bowling. Our first kiss was right after she made a strike. That first date turned into a whole weekend date. The ironic thing was that the following weekend, I had to go on a bachelor party in Cancun and the resort was called Temptations.”

Why did you want to participate in “Temptation Island”?

Kady- “I had been thoroughly evaluating and analyzing if John and I were meant to be together for several months before the opportunity to go to Temptation Island came about. I thought this would be an avenue in which we could be separated and have time apart to get the clarity and answers to decide if we were ready for marriage.”

John – “Well, I was actually pretty hesitant at first about being on Temptation Island. However, the perks interested me and, with added pressure from Kady to propose, it made me think that this would be a great test to see if we were meant to be together. My parents divorced when I was young and that’s one thing I never want to go through. I felt like this would be an ultimate test to see if we are fit for the next step.”

How did your family’s feel about you filming the show?

Kady – “My family was a little hesitant and, of course, worried. My mom’s biggest concern was her not being able to talk to me for 4.5 weeks. She was seriously appalled and upset by that. I calmed her down and convinced her that her baby would be fine. Ultimately, they supported our decision and thought it would be a fun opportunity.”

John – “Haha. My mom is a conservative Christian, so I played dumb and told her I had no idea what reality show I was signing up for when I did. I basically built her up slowly to handle the truth about a week leading up to us flying to Maui for filming.”

Kady – “Filming was a surreal experience, it opened my eyes to the whole world of production that I’ve never known before. It was really nerve-wracking the first week or so of filming, but eventually, we got used to the cameras being around and it became second nature. You really would forget that they were there.”

John – “It was a trip. It was definitely unlike anything I have experienced before. It was crazy to see how many people they had off-camera to make this happen. You know it’s just me and the guys and 12 single women, but off set you had at least 75 people making it happen. That was awesome.”

What was going through your head when you first saw the singles?

John – “When I first saw the singles, I was excited and still taking in the fact we were on Temptation Island. I think I was still pinching myself to make sure I wasn’t dreaming. There was definitely some anticipation and curiosity about what kind of singles we were going to see.”

How did you feel about your partner dating other people?

Kady – “I’m not really a jealous person, so it didn’t bother me to think about John going on dates with other girls. I kind of thought of it as more of a platonic thing. He has plenty of friends that are women and he hangs out with them without me all the time, so I kind of looked at it as the same situation.”

John – “I felt very confident about my relationship with Kady, so I wasn’t too concerned.”

Why did you both decide to block someone, Katheryn and Roman, the first chance you were given?

Kady – “Honestly at the time I was just “playing the game.” Yes, she was one of the most attractive in my mind, but when she said she was a southern girl, I knew John would be drawn to her. It made sense to use my block on her.”

Explain the notion that John wasn’t “southern” or “manly” enough, John explain how that made you feel.

Kady – “I have never told him he wasn’t manly enough for me. He used those phrases in his interviews, but that’s not exactly the right way to describe it. And Southern really isn’t the right term either. Texas is Texas, not southern. If anything it’s more Western. However, my issues with John had more to do with him not being as rugged as I would prefer. I like to hunt, fish, hike, camp, go four-wheeling, ride horses, kayak, be outdoors, be adventurous, be active, and live life to the fullest. John can be a bit of a homebody and very content with watching TV on the couch. That’s more of where the disconnect was.”

John – “I told her from the beginning that I was born and raised in Dallas. You’re not going to catch me wearing starched jeans and a cowboy hat. I do love the outdoors, grilling, camping and shooting guns. So when she questions my masculinity, I just have to brush it off.”

Is there anything you regret about doing the show?

Kady – “Not really. I feel I used the experience to fully gain what I needed to out of it.”

John – “I think there were probably a lot of things I regretted saying and doing on Temptation Island LOL!”

Would you do “Temptation Island” again?

Kady – “100%! It was an amazing experience and changed me as a person. I learned things about myself and about others that have taught me lifelong lessons and introduced me to people I would’ve never otherwise have been friends with before.”

John – While it was a learning experience for both of us, I would probably not do the show again.

How has your life changed since filming?

Kady – “I feel like my heart has grown and mind has been opened. The show changed me in a way that has enriched my life forever. I’m working on being less judgmental and accepting people who are outside of my little bubble of how I think things should be. I’m a better person because of the and feel like the sky is the limit for the things I can do and the impact I’m going to make on the world.”

Make sure to check out Temptation Island on USA Tuesdays at 10/9pm CST.

Make sure to check out all of our Q&A interviews!  Including this one with former Bachelor, Ben Higgins.