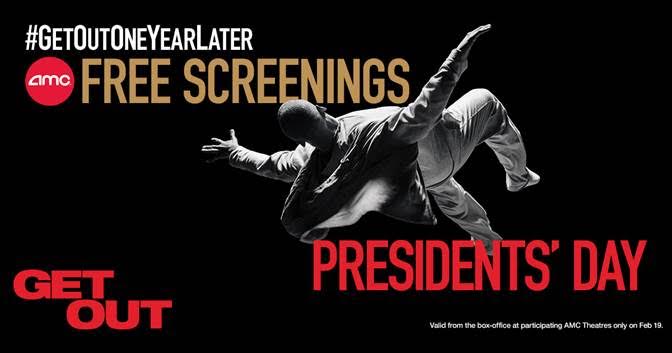 President’s Day is coming up on February 19th and what better way to spend it than going to see an Academy-Award nominated movie? Jordan Peele and Universal Pictures will offer fans free tickets to special Presidents’ Day screenings the movie Get Out at 55 AMC theatres nationwide.

This offer will be first come, first serve and each guest who requests a ticket the day of the movie at a participating location will be given one free admission to the 7:00 p.m. showing on February 19, up to theater capacity. Free tickets may only be picked up at the AMC box office that day and each guest must present a valid ID to receive their ticket, with a limit of one free ticket for each ID presented, while supplies last.

This offer is a part of the popular movement #GetOutOneYearLater, which is inspired by the film. A compilation video was also released that showcases the artwork inspired by Get Out featuring the hashtag to encourage more of the audience and artists to share of their artwork, experiences and discussions that were influenced by the movie.

To find out more information, visit Get Out One Year Later.

#FiftyShadesFreed Movie Review + What I Learned About Relationships

Product Review: Why Olay Whips is the Perfect Moisturizer

Top 7 Back To School Movies To Watch...