Incredibles 2 Movie Review + 3 Reasons You Should See It

The wait is over Super fans! Now that tickets are finally on sale, we have to gush about three reasons why you have to see Disney/Pixar’s Incredibles 2!

If you’re like me, then you’ve been waiting 14 years to find out what happens to the Parr’s after the closing scene in the Incredibles? Do they defeat the Underminer? How does Violet and Tony’s date go? And what is going to become of Jack Jack? Fear not, all these questions will be answered in Incredibles 2.

As we’ve seen from the trailers, Jack Jack’s powers come in full force for poor Bob to handle alone. In the movie, Helen takes over the role of breadwinner and enters the workforce as Elastagirl. This classic role reversal comes with more than just this twist. Throughout the movie, Bob finds himself struggling to keep up with Violet’s emotional roller coaster, Dash’s schoolwork, and Jack Jack’s numerous and unpredictable powers.

The family dynamic in the sequel is hilarious and entertaining to watch. The increased screen time of other characters like Frozone and Edna in assisting Bob with the kids is also a great addition. Another new addition to this movie is new supers each with their own unique and, sometimes, hilarious powers.

While Bob is playing the stay-at-home-dad, Helen finds herself in a new world during the sequel as well. Working illegally as a superhero trying to change the legal status of supers, she encounters her most dangerous villain yet, ScreenSlaver, a masked villain hypnotizing people through screens.

Incredibles 2 wouldn’t be complete without a family unifying battle at the end. Bob, Helen, the kids and their new super friends reunite to take on ScreenSlaver in the most important battle of their lives as superheroes.

Trust me Incredibles 2 does not disappoint.  I already have plans to see it again. 🙂

Incredibles showed us how hard it’s been for Supers in hiding. After years of being in the spotlight, having to go back to civilian life wasn’t easy. There were so many Supers itching to get back into action. By the end of the movie, it looked like maybe things were starting to get better. Good news! Happiness is on the horizon for everyone with superpowers. Thanks to two new characters, Supers get a new start in Incredibles 2. Siblings Evelyn and Winston Deavor have a plan–and it’s a good one! Don’t you want to see if Supers finally get the support they deserve? We do! 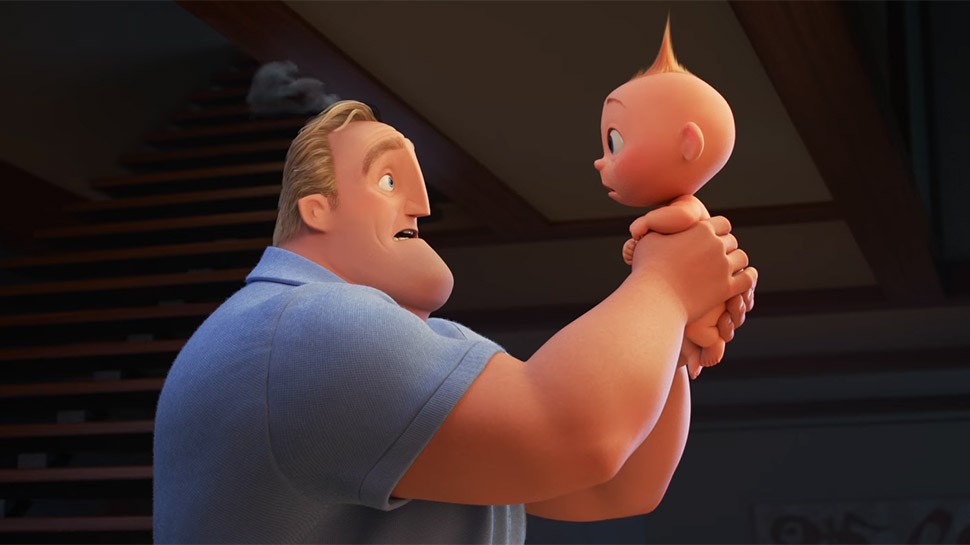 We keep mentioning him, but how can we not? Jack-Jack is an adorable little troublemaker! He’s really coming into his powers and that’s causing a lot of stress in the Parr household. With Helen out kicking butt and making a name for Supers, Bob has to learn how to handle a baby that sometimes disappears.  Um, and sometimes turns into a demon. And has laser vision and can also materialize between walls. Not to mention he’s still a baby! Who wouldn’t want to see Jack-Jack in action?

After defeating the Underminer, it’s time for a new villain! The Screenslaver enjoys interrupting televisions with the goal of hypnotizing people. Pretty intense, right? There’s not much we know about this villain. Whoever they are, they might give Syndrome a run for his money. Violet, Dash, and Jack-Jack will have to suit up with their parents and Frozone to save the day. Will they be able to stop the Screenslaver and everyone under his spell? You’ll have to check out Incredibles 2 to find out!

The 4 Best Types of Music-Themed Movies