Love all of those pretty costumes you see in Descendants? You can thank Kara Saun for that!

“A lot of people don’t know that I’m also the fashion consultant for Disney Consumer Products so I start really, really early in the process. It is my job to build the fashion for the whole “Descendants” world. I started out as a fashion designer and just transitioned into costume designing.

Find out more about Kara in this fun Q&A I got the opportunity to do with her.  She shares the inside scoop on her role working with Descendants 2 and how she made her dream job a reality.

Even though Kara is creating costumes for kids, she doesn’t feel like she is. “Kids are so sophisticated and mature anyways. They know fashion. They know brands. They know what they like and so I never see a kid and think, “I’m going to design for a child.”

Kara explains to us that the fashion for “Descendants 2,” is really about the story of the kids and where they are now. She says it’s her job to show how they’ve transitioned and matured.

Kara had fun creating a punk princess look for Mal. “In “Descendants 1,” she was just getting to Auradon and now she has really become a whole princess. So I really wanted to create something for her that showed that she’s been in Auradon for a while and she’s transitioned so she’s a little more polished. In “Descendants 1,” it went from straight punk to a preppy punk, and now it’s more of a polished punk.”

Kara explains to us how in “Descendants 1”, Mal wore a lot of leather, hardware, and gold but in the second movie it’s rhinestones and lots of embellishments. “She started out with this blonde hair. She’s really trying to be a princess and she has little lavender gels and that’s because even though she’s trying so hard to be a princess, she’s still the girl from the Isle.

There’s that whole story about keeping part of who you are not matter where you go and so it was really fun to create these little princesses for her. Dove is just stunning in all of her wardrobe that was from the Isle.”

Kara sees a lot of herself in Evie’s character. “What I loved about Evie was that she’s the designer of the group. Her business has picked up tenfold and she’s designing for all her classmates and honestly it reminded me of when I was in high school. I really wanted Evie to look like a young junior designer and so she has great purses”

Everything from head to toe for all the characters is custom. “The shoes are custom. The handbags are custom and the accessories are custom. One really fun part about all the wardrobe is that all of these outfits are detachable. For instance, when you see Evie she’s in the full dress. I can take the sleeves off. The sleeves came off. She has the vest, then it separates at the waist and she wears it as a skirt.”

Kara created pieces that could be used in different ways. Jackets can be turned into vests and into skirts! “This is done on purpose because when they’re in certain scenes and they’re dancing and they’re fighting I just wanted them to have that freedom. I thought it would be fun if everything was detachable for Evie and for the guys and for Uma as well. I loved all the new characters and Evie and Uma’s braided hairstyles.”

The Eye Shadow and Icons

Kara wants every character to have their own color. “Mal already had the purple. The turquoise reminded me of the sea and it’s very aquatic. I tapped into Ursula through the fringe because when Uma moves it’s like her tentacles are flaring up, and her hair and her braids look like tentacles too.

Her outfit detaches as well. The sleeves come off and also she has pants that she wears for certain fight scenes but it’s all detachable, all leather, all hand painted. One of the reasons it was so fun was that I let the kids look for all the icons on the outfit. China’s outfit has hundreds of little icons on it – shells, starfish, crabs and just everything. Mal has the dragons, Evie has hearts so it can literally be a game to go through it and find all the icons for everybody.” 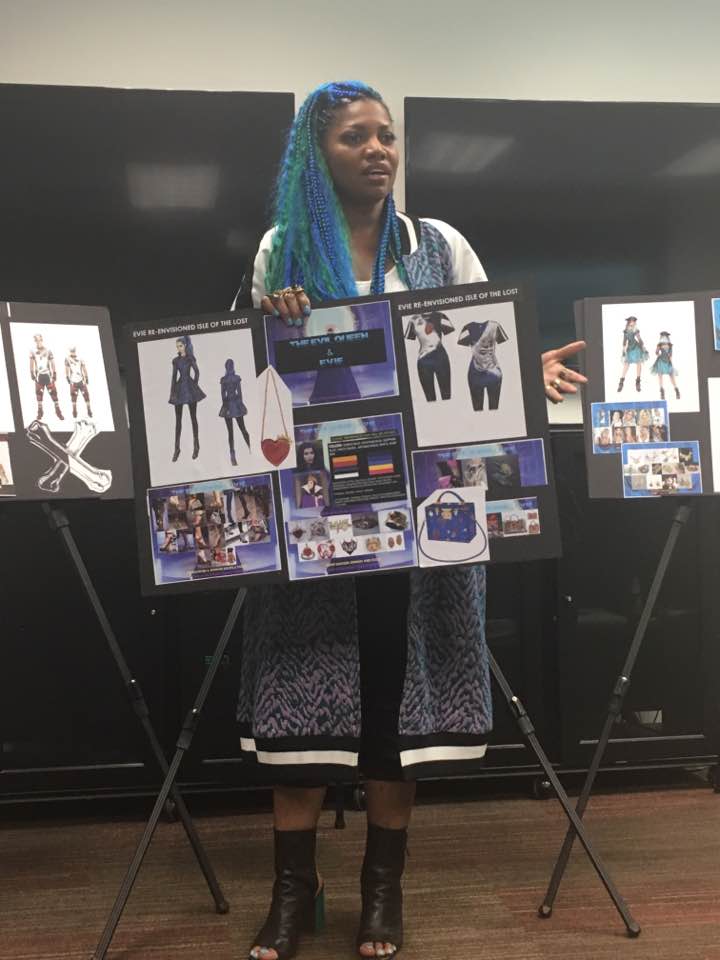 Carlos and Designing for Ben

“And then of course you have Carlos and I love that Carlos is a techie now. He’s grown too. I needed to show that Evie and the guys have all matured in Auradon and that everybody came full circle and each person is doing their own thing. Jay is the athlete so even his Isle look has that athletic look.”

Kara loves that Ben is now on the isle and had so much fun doing costumes for someone from Auradon and turning his look into the Isle. “He was so cute. This just fit him so well and still kept his Auradon look. He’s the king now but it still has that fun kind of Isle twist to it. As I said, one of my favorite things in “Descendants 2” was all the new characters and there were quite a few. You already met Uma. There’s also Dizzy, the daughter of Drizella and there was Harry. Everybody, you will be hooked!” 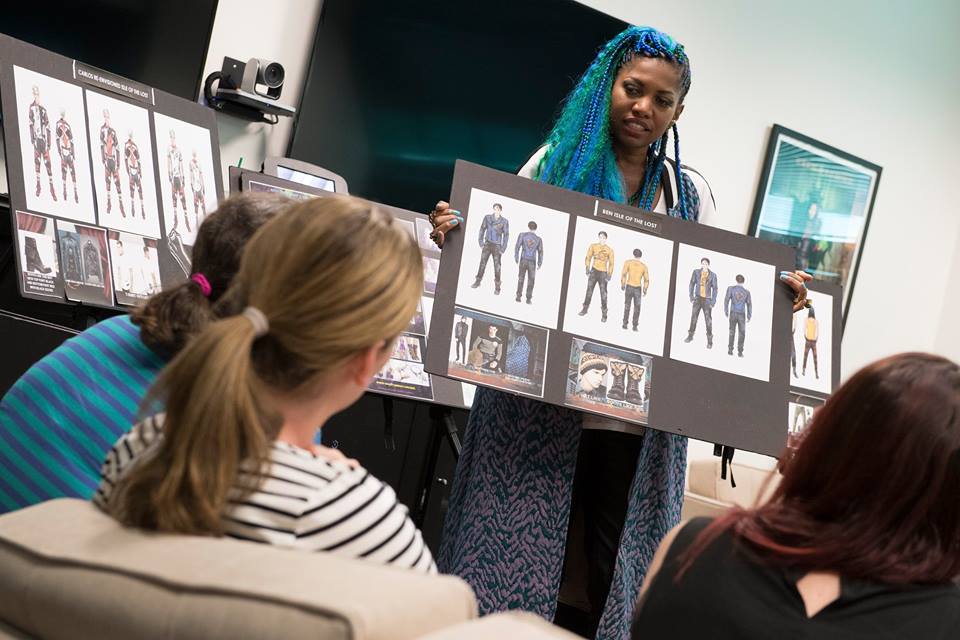 Kara loved creating the Isle costumes and joked about how Harry wanted to wear more rings even though he had rings on every finger! She calls the Isle costumes Scallywag Swag because it’s a mix of pirate punk, military and bohemian fashion. She says it’s a really fun fashion-forward twist.

Dizzy has hundreds of fabrics sewn into her dress and it’s handpainted and splattered. “All of the leather costumes are hand-painted and we distress them. We had so many costumes this time. It’s so fun to create this world of “Descendants.”

Kara gave everyone cute keychains with their character’s iconic symbol on it. The cast just loved them and said it was one of their favorite things they got!

As a fashion designer, it’s important to Kara that she learns everything from the size to the fit and making sure the fit is right for all the actors. “I know what everybody loves. “Dove is sophisticated in her look so it was easy to do princess for her. She’s my little princess and every day she would come in and say, “Oh my god, I just feel like a princess.” We would have so much fun at her fittings.”

The actors come to Kara when they have a request about their costumes and she always tells them, “We can do that!”. Thomas, Harry Hook, is from Scotland and wanted to add Scottish fabric to his costume. Sofia wanted to go straight old Hollywood glamour.

“I love the story of the Lonnie this time. All the girls are so strong in this movie. They’re so powerful in this movie. Every girl in this movie has a story. It’s very powerful and so for Lonnie I created a look that suits the daughter of Mulan.” 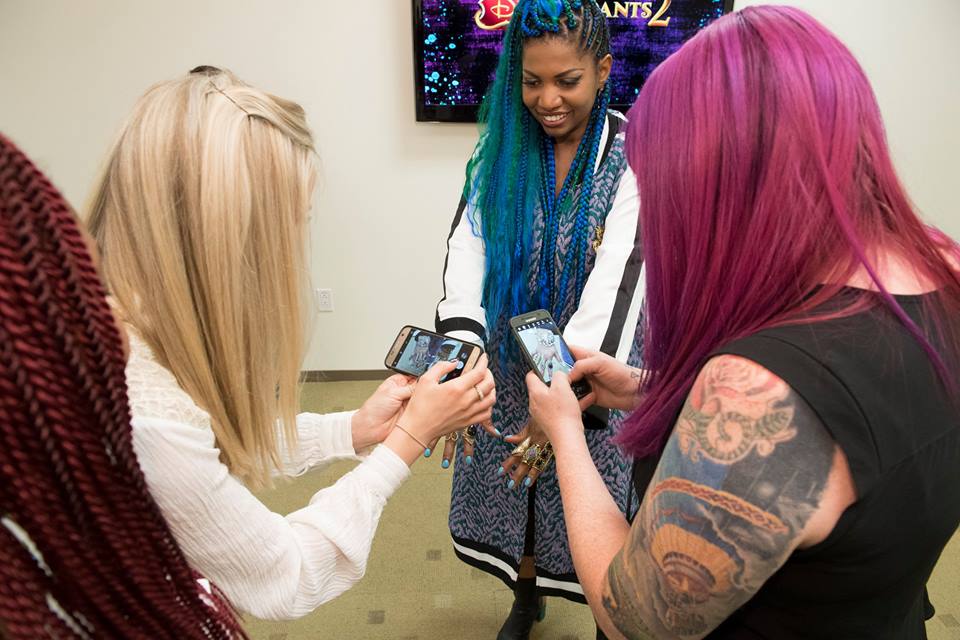 Kara says after “Descendants 1” she was already making new outfits and the first thing she does when she gets the scripts is research. She draws her inspiration from the Disney vaults. “I’ve been there quite a few times and I watch the movies over and over again. Even now I just watch the movies over and over again and then everything else is based on the storylines. I have to tell the fashion narrative for each and every character so that when we see them it makes sense.

When you see the movie “Mulan”, seeing Lonnie in those pants makes sense. I know what looks good on Dove. She has the tiniest waist and so no matter how small I make her clothes I always have to take them in. It’s fun knowing the talent too and knowing what they like, because to me when the talent likes their wardrobe it helps their performances. So I really want the characters and the talent to love what they’re wearing.”

Kara says there’s no external pressure and the pressure comes from herself. “I want them to feel that they’re that character not just in wardrobe. Also, the stories are so strong. Kids can relate to the story of Mal and Uma and how they are different. I love the story of Uma because everybody’s off the Isle and she’s still there and she feels abandoned. They are stories that people can relate to and so for me, it’s just “How can I use costumes to improve this story?” It really is a combination.”

It’s important for Kara that the costumes go with the setting so she often meets with production designer Mark Hofeling. “We sat there for hours and we talked about color. Once we were done I put together reference books and my reference books are hundreds of pages long. It’s references of colors, of certain things. I do hair. I reference everything and we’re very cohesive so when you see these sets you’ll notice that the sets match the costumes. That’s because we collaborate. We send each other pictures. We send each other fabrics, props.”

“I think that’s very important. I have nieces and nephews. I have children myself and I feel like kids should look like kids. I think you can be sophisticated and fashion-forward and fun and fresh without being too overtly anything. I really set out to create age-appropriate costumes.” 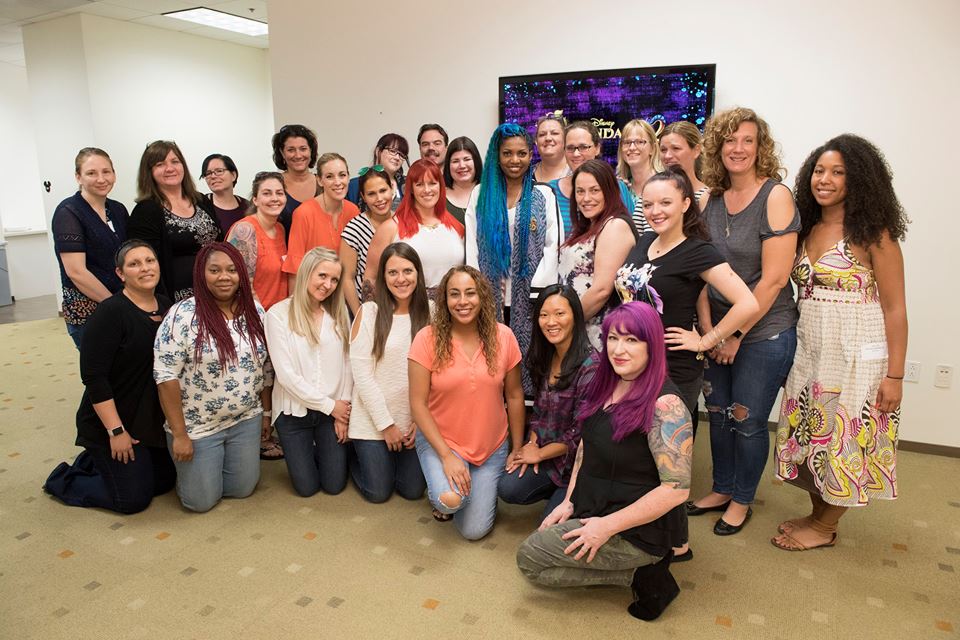