Q&A Interview with Kailah Casillas from MTV’s The Challenge

If you watch MTV’s The Challenge or The Real World, then you know and love Kailah Casillas. In this Q&A with Kailah, she’s going to tell us the scoop about everything from The Challenge to her favorite tats!

Icebreaker: How heavy was the box Drake Bell couldn’t move on Champs vs. Stars? You made it look super easy and light!

Haha! There was nothing light and easy about pushing the weight of that big box with a child-star on top of it, but thank god I don’t often skip leg day. I can’t say the same for Drake, though!

1. What do you love, or what do you most enjoy, about doing Champs vs. Stars?

Champs vs Stars was awesome for a bunch of reasons. First and foremost, the opportunity to give to charity, which, in my opinion, they didn’t highlight enough throughout the series. (Shoutout to my charity 4 Kids of South Florida, it was an honor!). But much less importantly, it was awesome to meet the stars and compete against them. Champs is much less cut-throat than the real series, “The Challenge” that it’s spun off of, so I really liked that aspect…along with living in a hotel with a bar in the lobby and having access to my phone the whole time, of course! 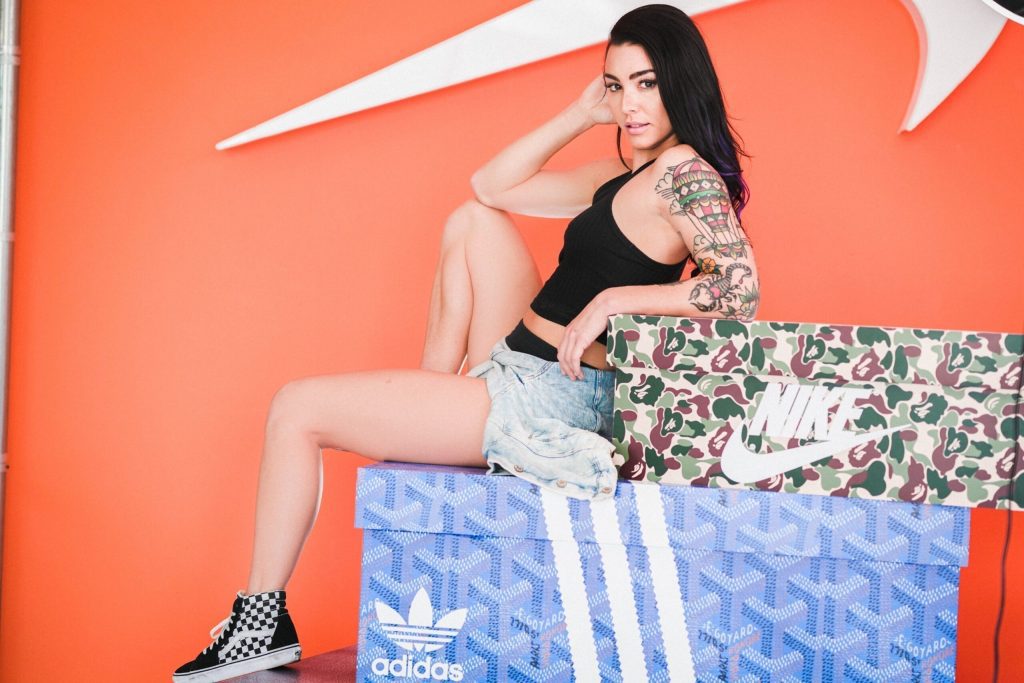 2. What do you love, or what do you most enjoy, about doing The Challenge? Other than the prizes.

I’ve been an athlete my whole life but as I got older and went away to college, I was focused on my grades and I didn’t have time for any type of sports. The Challenge, for me, is a way to be competitive, which I love. If you ever went to sleep-away camp as a kid, it’s kind of the same thing but with a bunch of crazy people and a few cameras.

3. What brings you back each season?

I NEED TO WIN. It’s like gambling…if you do it once, you keep going back for more in hopes of winning big some day.

4. Do you know in advance who is on each season?

Well… technically no. We aren’t supposed to tell anyone if we’ve gotten the call to be casted on the upcoming season, but most of us are actual real-life friends, so obviously people tell their friends and word kind of travels through the grapevine, so we all have an idea of who’s going to be on the next one by the time we’re leaving.

5. While you were on Real World, what as your favorite experience?

I was so lucky to be on my season of Real World. The ratings really weren’t great and the series ended shortly after I was on it, but my season was called “Go Big or Go Home” so we got to do all sorts of crazy stuff like jump out of hot air balloons and fly fighter jets and a bunch of other awesome stuff that no other season of Real World did. I was super lucky to be casted for that specific one and create memories that I most likely would have never gotten.

6. What do you do when you’re not on The Challenge?

When I’m not on the Challenge, I’m living in Vegas. I try to balance my gym life and partying best as I can. I travel a lot and try to spend as much time with people that I love. What the audience may not realize is that we really only have 3 months or so between leaving for shows and these shows sometimes are filmed for around 6-8 weeks. We really aren’t home all that often.

7. What’s your favorite thing to do during downtime on The Challenge?

There’s SO MUCH downtime on The Challenge. Honestly I try and hibernate in my room alone a lot because we all spend SO MUCH time together and I don’t want to get sick of everyone too quickly. Living in a house with no phone access or TV or even music…just the sound of each other’s voices day in and day out can be a lot to deal with. We all hang out by the pool a lot, take naps, and hope for alcohol, but they’re pretty strict about giving us any booze until later at night a few days a week.

8. What’s your motto, or a quote you live by that guides you?

“Think positive thoughts & change your life forever” — I feel like this quote applies to pretty much anything in life. I usually bring a calendar book and markers with me on the show so I’ll write this really big on one of the pages just to remind myself.

I have a big pin-up girl wearing fighting gloves on my right thigh with the words “She believed she could so she did.” (going back to question 8, I’d say this is my second favorite quote). The tattoo is just really representative of me and how I was raised. My dad always instilled that “you’re a strong, smart, independent girl and you can do anything you set your mind to” type of mentality in me.