NEW SCOOP
“Mulan” Director Tony Bancroft Reveals Thoughts on the...
Dillon Forte Talks Eco-Friendly Products + Tattoos on...
What You Should Do to Protect Your Most...
Which Umbrella Academy Character Are You?
10 Hallmark Movies to Celebrate the Start of...
7 Products Under $20 You Need for Your...
How TikTok Star Robert E. Blackmon Aims to...
Trendy Wellness Ingredients You Need In Your Pantry
How Obsessed with Psych Are You?
Does Having A Better Kitchen Make You A...
EntertainmentMovies

Queen Of Katwe: A Must See Inspirational Movie #QueenOfKatwe

When I was in LA back in August, I got the chance to see Queen of Katwe and to describe the movie in one word: inspiring!  Queen of Katwe tells the story of Ugandan chess prodigy Phiona Mutesa who is first introduced to the strategic game when she is nine years old. Over a number of years, she achieves the title of junior champion and then national champion in her homeland before finally participating in the 41st chess Olympiad in search of becoming a Grandmaster. 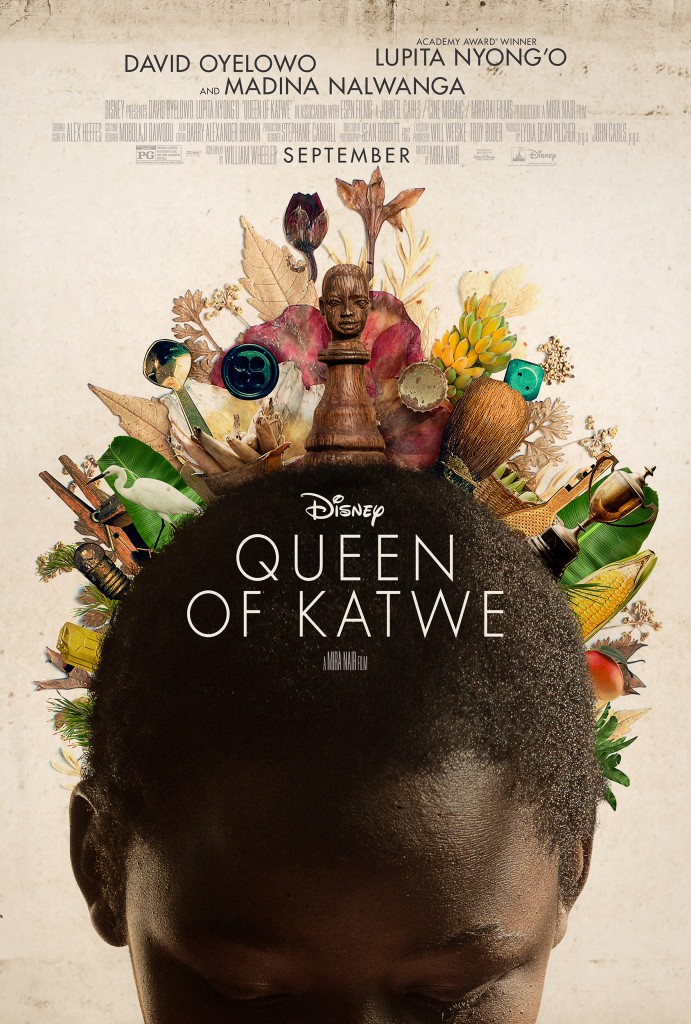 Queen of Katwe was one of the most inspiring movies I have seen in a long time.  I love a good underdog story so of course I was hooked from the beginning.  To get you excited about the movie here are 8 interesting things you should know before you see it.

8 Interesting Things to Know Before Seeing Queen of Katwe

1. Newcomer Madina Nalwanga plays the title role. And there are already rumors of Oscar contention.

2. At the age of nine Phiona had already lost her father, dropped out of school, and was selling boiled maize from a saucepan on her head to help provide for her family.

3. Disney and ESPN teamed up to make Queen of Katwe.

4. One day when Phiona strays from her normal route selling maize she accidentally happens upon Robert’s veranda where chess is being taught. At first, she is more interested in the food Robert has to offer rather than learning the sport of chess.

5. After a year of playing chess, it became evident that Phiona had a special gift for the sport.

6. The film stars Lupita Nyong’o as Phiona’s mother, Harriet. Nyong’o is best known for her break out role in Twelve Years a Slave.

7. David Oyelowo portrays missionary Robert Katende who first introduced Phiona and many other children living in the slums of Kampala, Uganda to the game of chess. Oyelowo may appear familiar to audiences. He played Dr. King Jr. in 2014’s Selma.

8. Nyong’o and Oyelowo will next star in Americanah. The film tells the story of a pair of young Nigerian immigrants who face a lifetime of struggle but are able to persevere through their strong partnership.

This is such a feel good movie.  But, what I loved most is that it makes you connect to aspects of your own life.  After a year of playing chess, it became evident that Phiona had a special gift for the sport. “Chess is a lot like my life,” Mutesi has said.

“If you make smart moves you can stay away from danger, but any bad decision could be your last.”

The movie is full of life lessons and will leave you ready to conquer the world or at least take a few risk to follow your own dreams. 🙂 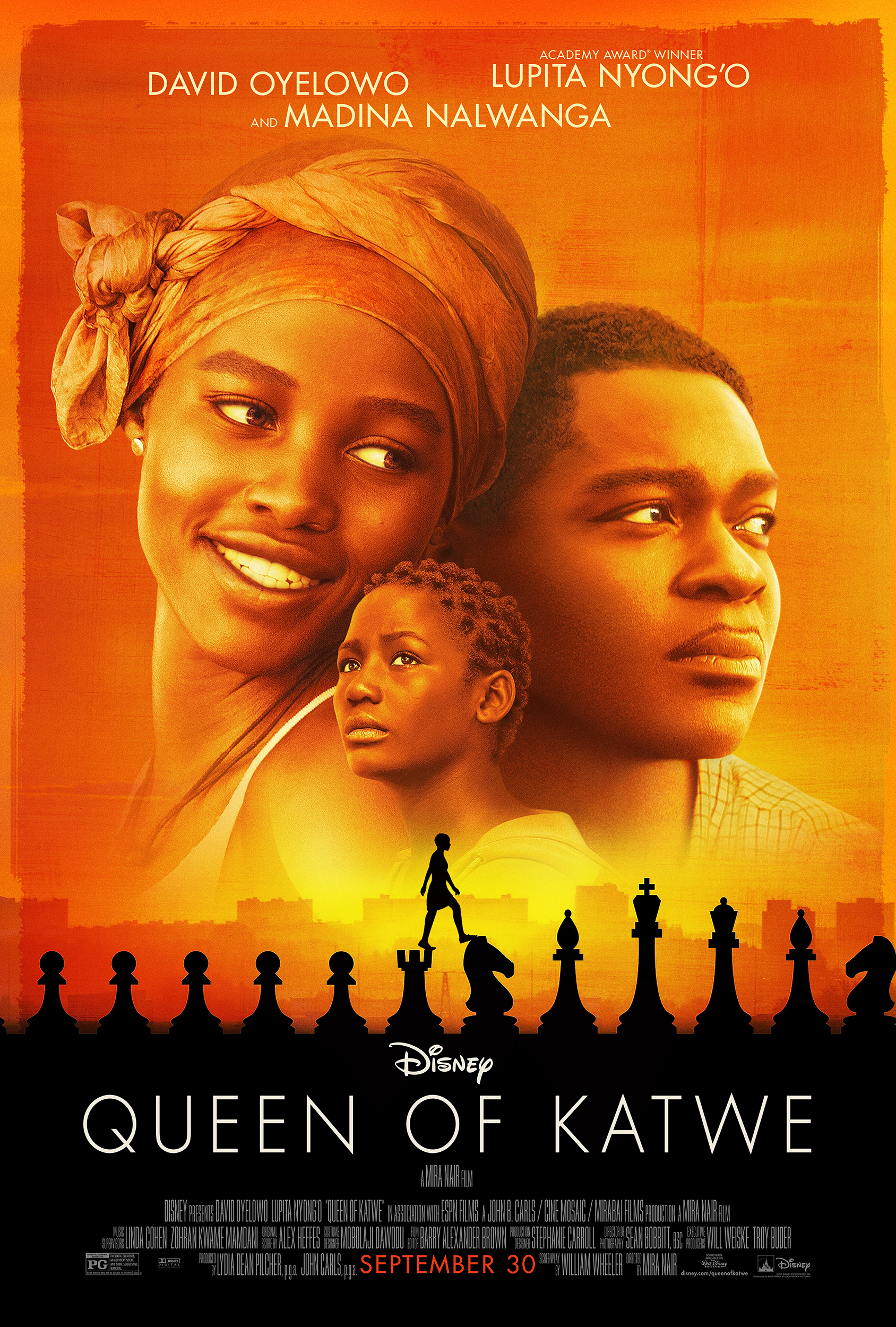 For 10-year-old Phiona Mutesi (Nalwanga) and her family, life in the impoverished slum of Katwe in Kampala, Uganda, is a constant struggle. Her mother, Harriet (Nyong’o), is fiercely determined to take care of her family and works tirelessly selling vegetables in the market to make sure her children are fed and have a roof over their heads. When Phiona meets Robert Katende (Oyelowo), a soccer player turned missionary who teaches local children chess, she is captivated. Chess requires a good deal of concentration, strategic thinking and risk taking, all skills which are applicable in everyday life, and Katende hopes to empower youth with the game. Phiona is impressed by the intelligence and wit the game requires and immediately shows potential. Recognizing Phiona’s natural aptitude for chess and the fighting spirit she’s inherited from her mother, Katende begins to mentor her, but Harriet is reluctant to provide any encouragement, not wanting to see her daughter disappointed. As Phiona begins to succeed in local chess competitions, Katende teaches her to read and write in order to pursue schooling. She quickly advances through the ranks in tournaments, but breaks away from her family to focus on her own life. Her mother eventually realizes that Phiona has a chance to excel and teams up with Katende to help her fulfill her extraordinary potential, escape a life of poverty and save her family. Disney’s “Queen of Katwe” will open in U.S. theaters on September 23, 2016.

Make sure to keep up with Queen of Katwe on social media and check out the official trailer below.

9 Sleep Secrets That Could Change The Way You Live

10 Signs You’ve Found Your Bestie for the Restie