I hope you are loving these posts from the Pete’s Dragon world premiere because I am having the best time sharing them! Today its another interview post.  This time with Wes Bentley!!! Don’t forget to check out my interviews with Bryce Dallas Howard and  Oakes Fegley & Oona Laurence. 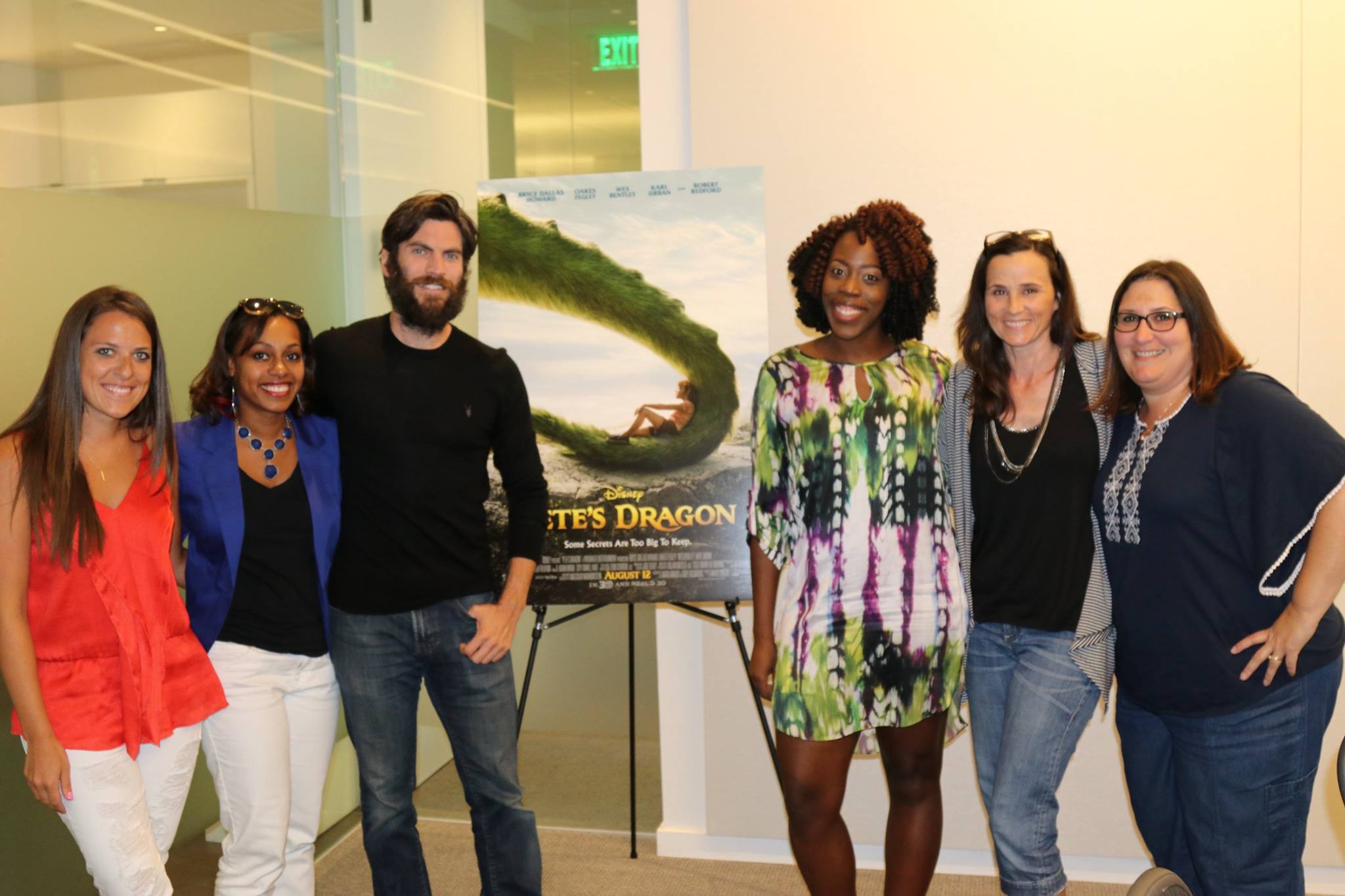 Wes Bentley is a Hollywood actor who has quite the resume, he is best known for his roles as Ricky Fitts in American Beauty, Blackheart in Ghost Rider, Thomas in P2,  and Doyle in Interstellar.  But, if you’re like me you remember Wes as Seneca Crane in The Hunger Games.

We get to see a whole new side of Wes in this movie and you are going to love this good guy side of his.  As a dad himself, it seemed pretty natural for Wes to play the positive father in Pete’s Dragon.  He was a pleasure to interview! Get the scoop on Wes and his role in Pete’s Dragon below. 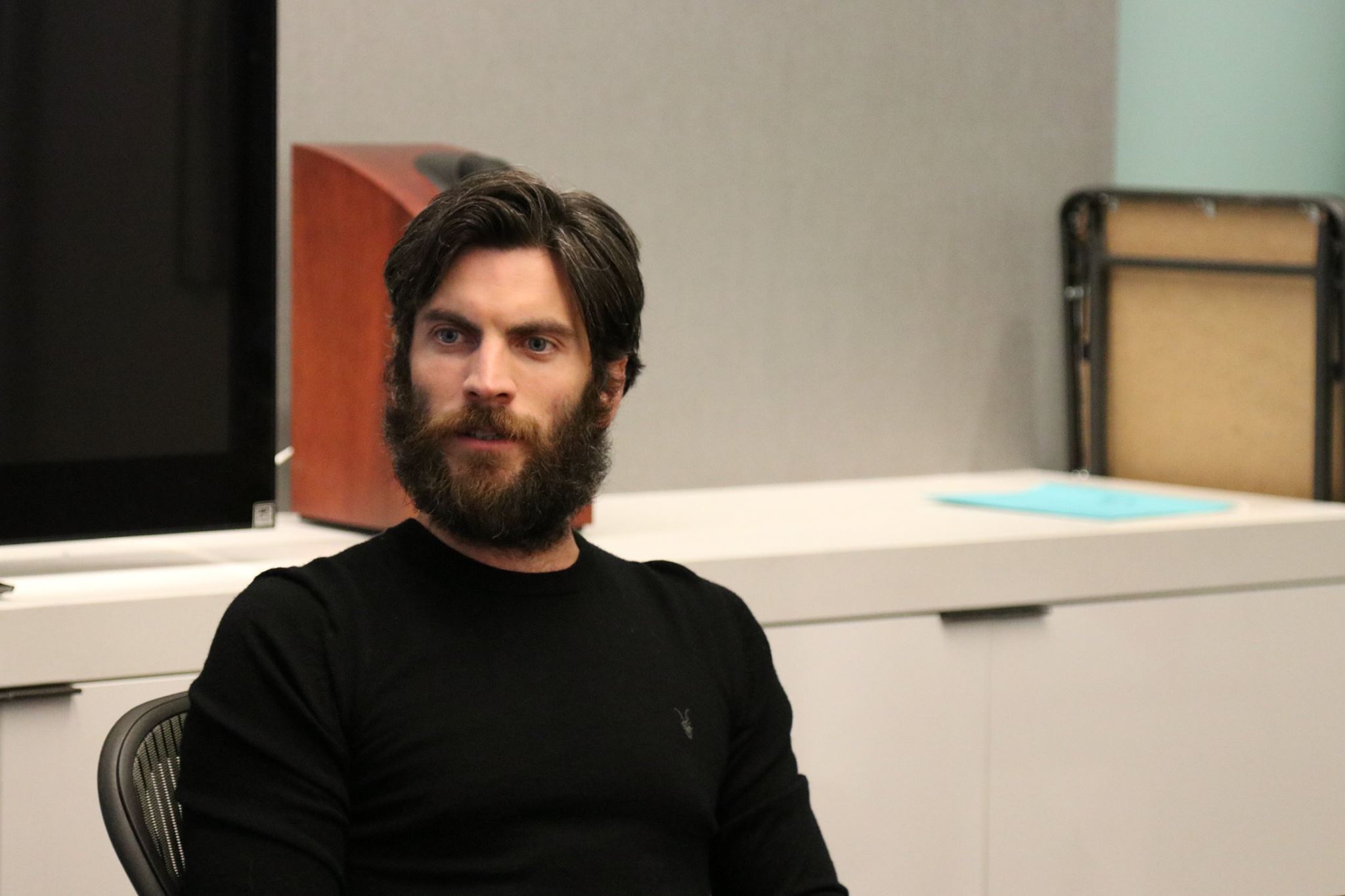 How was it filming in New Zealand?

It was beautiful.  My family came out for the last two months so I had my kids and my wife out there.  I had a lot of time between shooting so I got to do a lot of the touring around and we got to go do a bunch of very exciting things.  Everywhere you turn in New Zealand there’s something exciting to and you don’t have to sign a bunch of waivers and all of that. It was a blast. I mean, I think it’s the gem of the world.  It’s so far away from the madness and so you get that element. It was just stunning.

What’s it like being in your first Disney film?

Oh, it was great. I’ve been a Disney fan (since) I was a kid and I was excited to be part of a movie with them.  Especially because I have young kids, I wanted to do something that my kids could see while they’re young.  My son is going be six in November. He’s coming with me tonight to the premiere.  It’s going to be exciting.  He’s excited about that.  I don’t know how he’s going to react seeing me because he’s seen images of me in a film, but of course he’s never seen anything beyond a few words.  This is the first film I’ve really been able to be like that.

How did you become part of this film?

Luckily, I was asked to be a part of the film.  I had met with David Lowery on something else, maybe a year before or a few months before this came out.  And he luckily really wanted me to be in this and convinced them that I could be in this… that I could play a nice Disney dad. I didn’t have to go through any auditions or anything like that.  I just found myself on the film and couldn’t have been more excited.  It was everything I wanted to do, the direction I’ve been wanting to head a little bit.  David is just one of the greatest guys I’ve ever met.  And he’s not just a talented director but a warm, sweet man.

What was that process like for you as an actor, transitioning to a nice guy role?

It didn’t feel like it should be hard because I am a nice guy.  I have my own kids but, I’m aware of my film habits because I have for so long played guys who are darker or dealing with very complex issues. They’re dealing with their darker sides.  So, I came in really aware that there were obviously things about me that people see that as. Usually, it’s my eyebrows.  I was very aware of my eyebrows, trying to make sure my face showed my inner feelings which didn’t always happen.  I’ve always had to deal with, “Why are you so mad?” or “What are you angry about?” when I wasn’t.  I was thinking about lollipops and cotton candy. I did work on that a bit. 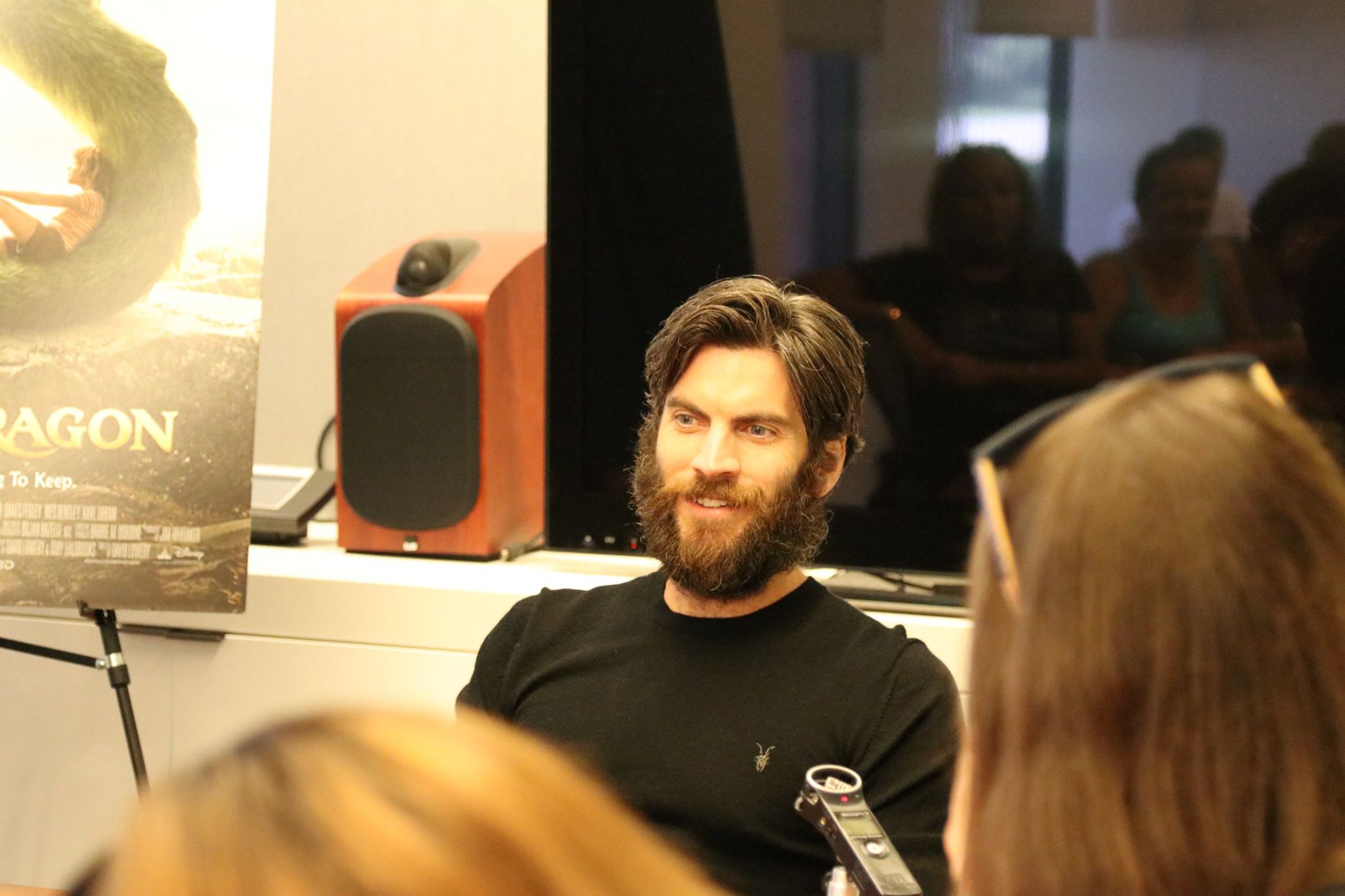 Did you do any research about your character in the movie?

I tried to learn as much about lumbering and felling. I did try to learn as much as I could about the types and versions of lumbering that you can do and what were the most environmentally impactful. (I) tried to convey that to Jack because I feel like Jack was walking the balance of having to make money for his company and all these men in this small town depending on that company.  At the same time, (he) was environmentally aware of it, but also becoming more environmentally aware because of who he was in love with and what she cared about.

Do you think the audience will take away the importance of environmental issues after watching this film?

Yeah, absolutely.  We were in New Zealand and lumber is one of their major exports.  There were places we shot (that) were basically tree farms.  We’d go through whole sections trying to get back to these sets where it was just all torn down trees.  Once they’re down, they can’t regrow them there for a really long time.  I can’t remember how long it is.  It’s a decade or more.  So, you’re just seeing this big swath of land that’s just dead trees.  You know they’re going to something useful and they’re re-growing all this other stuff, but it’s the eye sore. The reaction to it is hard.  It kind of hits you to the core because it’s the world. The earth’s part of us; we’re part of the earth.  You can sense it there.  There are definitely better ways to do it now where the trees can grow back quicker, but a lot of times you’re growing back quicker just to cut them down again.

But, we use it so much.  It’s part of our lives.  So, it is an industry… A legitimate industry. There are families that depend on it.  What I learned is that it’s a hard balance in the end and it’s not just a simple “we shouldn’t do it” kind of thing.  It’s just can we do it responsibly.  I think they work on it.  I think there are elements of the business that work hard on that.  And I learned that.  That felt better.

One of the big things about the film is seeing things through a child’s eyes and believing in magic.  Did you walk away from the film with more of a kid heart?

Yeah, David’s got that in him.  You can see the kid in him.  It’s just all over him… Having all those imaginative elements and having a love for the first film myself… The sort of the idea of the imaginary friend or the dragon in your life as a kid. It brought back all that. You know, my imagination was really hyperactive as a child and animated.  I had those elements and so those things change as you live life and go through the hardships which is why I love this film for everybody.  I feel like it kind of can reawaken that feeling which you kind of hope for in a movie like this, right?  And they kind of, they go directly at it. 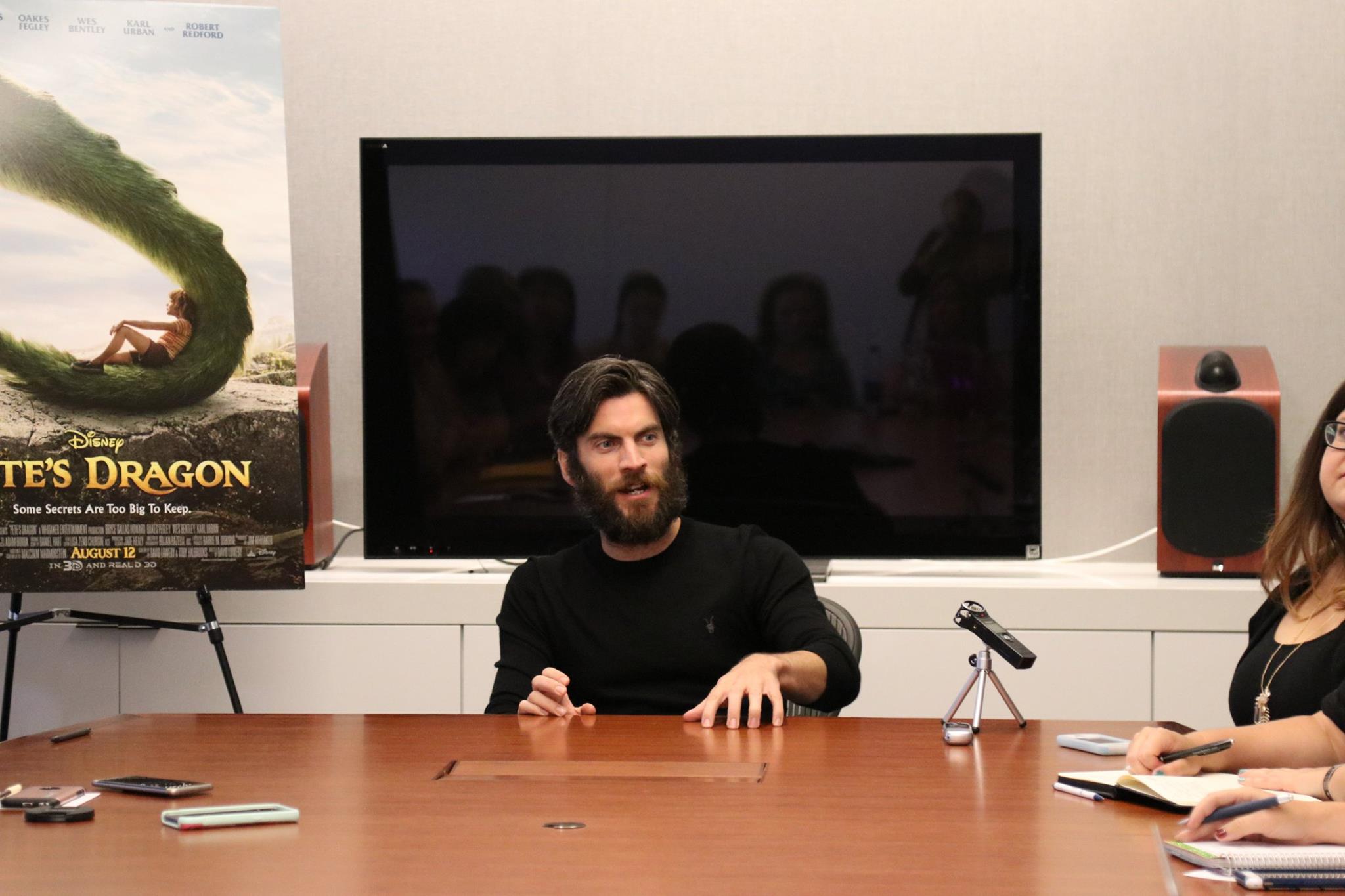 What was your first reaction to finding out about the drastic changes to story in this versus the old film?

I expected that to happen because I think it’d be hard to use the elements from the old film and bring it to filmmaking now.  With the advances in C.G.I., I knew that dragon was going to be a different kind of Elliot.  I wasn’t surprised (and) I wasn’t bothered either. I kind of thought it was cool to have two separate films with a similar idea.  I think I was told early too that it wasn’t going to be anything like the original.  I didn’t marry myself to any of those things.

It’s great.  I mean, it’s everything you think it’s going to be.  He’s someone I always wanted to emulate as an actor… His natural delivery, his charm, his selection of roles and what he can play.  And he’s just a warm man.  He came to set, always had great stories, and talked to everybody about everything. You’d watch him act and he just comes on and he’s just there.  And it seems so easy for him.  It’s just great to see that.  His love for film is very clear as well. He and David really clicked too and that was fun to watch them have a sort of language, a filmmaking language that I could learn from maybe one day if I was ever going to make a film.

What was one of your favorite moments while filming the movie?

Being up on the fake dragon with Bryce (Dallas Howard) and the wind blowing… We’re supposed to, aren’t really sitting on a dragon for the whole day.  It’s early on in the filmmaking and we’re making jokes with each other, trying to make each other laugh It was a fun day.

Health Conditions For The Modern Age