My entire weekend was spent watching ABC Family’s Chasing Life, a show that I only planned on watching a few episodes, but it turned into a full on binge watch. All I could think as a I powered through the first season and caught up on the second, was why am I only now watching this show? You’ve definitely seen the promos for it and passed it on Netflix, but I suggest you check it out. It’s a great show and this is why more people need to watch Chasing Life. 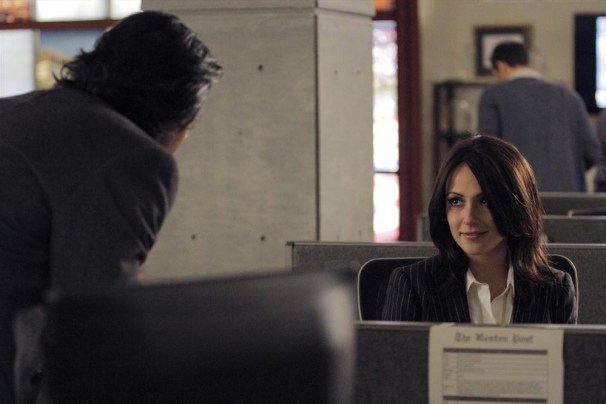 Chasing Life follows the story of April (Italia Ricci), a recent college graduate who just landed an internship for a Boston newspaper. She has huge dreams and will stop at nothing to achieve them. April knows how difficult it was getting a job after college and wants so badly to succeed in journalism. Even after finding out she has cancer, she continues working right up until she starts her chemotherapy.

There is a really great love triangle

We are all suckers for a love triangle; if you aren’t then I don’t know how you get through any TV show or movie franchise of the last eight years. This one is between April, Dominic and Leo. When I first watched the pilot, I had no idea there was going to be one and I’m not going to lie, my interest in the show wasn’t very high. This was mainly due to the fact that I don’t care for her co-worker Dominic (Richard Brancatisano). I’m Team Leo all the way, which brings me into the next reason.

Cappie from Greek is on the show

Greek fans rejoice, Cappie (Scott Michael Foster) is on the show as April’s fiancé, Leo. I personally wasn’t a Cappie fan (Team Evan forever), but I love the character of Leo. I don’t want to give away too much about his character because the way his story unfolds is how you end up loving him so much. He doesn’t end up becoming a regular cast member, instead he is credited as a special guest star, but still remains very prominent to the story. This is due to obligations on his new ABC show with the not so great name, Blood and Oil, formerly titled Oil (because you know, adding two words helped so much).

April gets diagnosed with leukemia, and she spends much of the show battling it. It takes her a while to come to terms with it and is unable to tell the news to her family for a while. One minute you’re smiling and the next you’re trying not to cry your eyes out.

Ex: On last week’s episode, April was trying on wedding dresses, which you can’t help but be happy for her. This quickly changes to feeling sorry for her when the sales girl at the boutique is ignoring her because she was uncomfortable around “the sick girl.” April catches on and asks, “Are you afraid of me because I have cancer?” When you’re on the verge of tears, April stands up to the sales girl and it was very Pretty Woman of her. Then you’re back to feeling happy and proud.

There is only one season on Netflix, which consists of 21 episodes. After the first few episodes, you will be hooked. You won’t be able to stop wondering what is going to happen to April and the rest of her family and friends. Once you’re done with the first season, which probably won’t take longer than two days because you’ll be so invested in their lives, you can quickly catch up on the season 2 episodes just in time to watch the latest one.

5 Best Types of Tea For Your Health
← Previous
Fashion Inspiration from Kimberly Stewart
Next →
Click here to cancel reply.