Come one, come all to the greatest theme parks America has to offer!  Doesn’t matter if you’re young or old because these parks will bring out the kid in everyone. Here are 7 of our favorites! 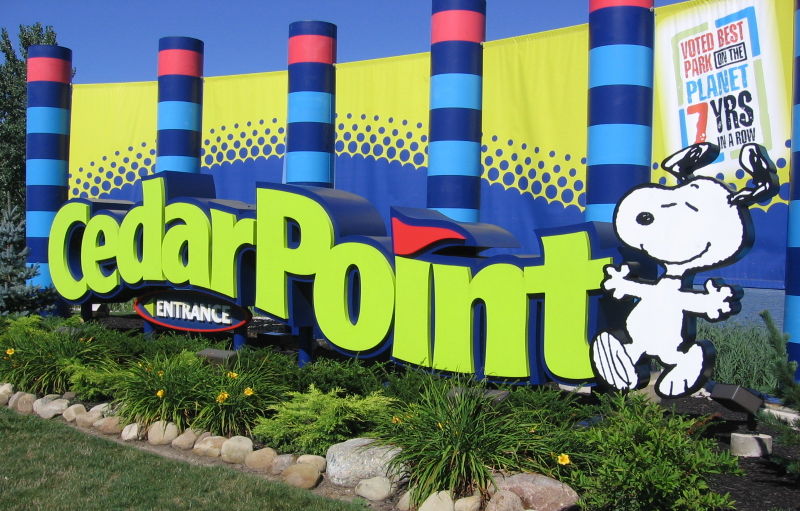 Why go to six flags when you can enjoy a day at a theme park that hosts some of the largest thrill seeking rides in the world!?!  Cedar Point is an amusement park located right off of the Lake Erie Peninsula in Sandusky, Ohio.

If you’re into thrill rides, Cedar Point is the place to be!  The Top Thrill Dragster is the second largest roller-coaster in the world.  It is a vertically built, red and yellow roller coaster standing tall at 420 feet and travels 120 mph.  The Millennium Force takes third place at 310 feet tall and reaching 93 mph!  Let’s not forget the cast of endearing characters you’ll meet around the park.  Snoopy and the rest of the Peanuts gang will be there to have fun with you all day!

While some people are thrill seekers, others prefer sightseeing.  In this case, Worlds of Fun is the place for you!  Located in the bluffs above the Missouri River in Clay County, Missouri, the Worlds of Fun Park takes its theme from the famous storybook, “Around the World in Eighty Days” by author, Jules Verne.

It is divided into five major sections: Scandinavia, Africa, Europa, the Orient, and Americana.

Rides, attractions, shops, shows, and restaurants are named according to their corresponding region.  Big fan of Snoopy, by chance? This little guy has his own section of the park with over 20 rides for you to enjoy in called ‘Planet Snoopy’!

It’s official!  NYC has something fun for everybody!  Adults and children alike can go live it up at Luna Park- aka CONEY ISALND!  This is one of the hottest theme Parks that is located right off the coast of Brooklyn, New York.

This park has a cute carnival atmosphere to it!  Not only does this theme park have a lot of history, there are also lots of notable attractions that cater to everyone.  If you’re into thrill seeking adventures, there is the Coney Island Cyclone, and the Power Surge.  If you plan to get wet, I would suggest the Wild River- a “waterific’ rollercoaster!

And no theme park is perfect without the ‘Slingshot’ ride!  Come visit one of New York City’s many historical landmarks and enjoy the day at Luna Park-Coney Island.

If you’re into zoology and animal theme parks, Busch Gardens is the place to be.

There are currently two Busch Garden parks: the original park in Tampa, Florida, and the second park in Williamsburg, Virginia.  Both are owned and operated by SeaWorld Entertainment, so you know that there will be a lot of animal adventures in these parks!

Busch Gardens in Tampa, Florida has an African theme and was originally tagged “The Dark Continent”.  This park is one of America’s largest zoological institutions with 335 acres of land and over 2,700 animals.  Some attractions include Edge of Africa, Syanley Falls, Rhino Rally and Kumba.

Busch Gardens in Williamsburg, Virginia has a European theme and was originally tagged “The Old Country.”  The park is divided into seven sections, all of which have a theme based on a European country.  Some rides include Turkish Delight, Roman Rapids, Verbolten and Rhine River Cruise.  You can also stop by Sesame Street Forest of Fun to hang out with Elmo, Cookie Monster and the rest of the Sesame Street gang!  Don’t forget to check out their live shows or special events!

One thing that San Diego is known for is its beaches….and its boardwalks!  Belmont Park is a 30,000 square foot amusement park that is located right off of coast of the sparkling Pacific Ocean.  This park attracts millions of people each year.  Where else can you enjoy the beach and a huge amusement park at the same time????

This is an historic amusement park that first opened on July 4, 1925 as the Mission Beach Amusement Center.  The historic attractions and rides that keep guest coming back include the Giant Dipper.   In fact, this wooden rollercoaster is listed on the National Register of Historic Places.

Another historic attraction is The Plunge- an indoor swimming pool that contains fresh water and features a “Whaling Wall” painting by artist Wyland titled Orcas off Point Loma.  And while others are enjoying the rides, those who are foodies can indulge in all of the seafood, hot dogs, crafted burger, sweet treats and cocktails at all of Belmont Park’s oceanfront restaurants.

Hershey’s, Reese’s, Kisses, Twizzlers, and Jolly Ranchers!  Hershey Park invites all candy lovers to indulge in this cocoa loving family theme park located in Hershey, Pennsylvania.  If you’re a chocolate lover, then this place will be heaven on earth!

This park has 70 rides with 13 rollercoasters and 14 water rides.  The most popular ride is Skyrush, an Intamin prototype Wing Coaster that is 200 feet tall, has a 212 foot drop and a speed of 75 mph.  Other amusing rides include Great Bear, Cocoa Cruiser, Comet and Kissing Tower (ooh la la!)

Other exciting news, Hershey Park is opening a new ride this year- called Hershey Triple Tower- Kisses Tower.  All three of these thrilling drop towers stand at 80 feet high.   And if you dream of getting wet, you can hang out at the Boardwalk which features five new water park attractions!

Owned and operated by Cedar Fair, California’s Great America amusement park features over 40 rides and attractions.  One of its most notable attractions, the Gold Striker, is the tallest and fastest wooden roller coaster in northern California.  It has even been featured as a top-ranked wooden roller coaster in Amusement Today’s annual Golden Ticket Awards publication.  And for those who love to soar through the air in a 360-degree vertical loop, Flight Deck is the perfect thrill ride for you!

And who says visiting an amusement park is only ‘cool’ in the summer?  California’s Great America hosts their own ‘Winterfest’ during the end of the year holidays.  There’s a tree lighting ceremony, live shows and events, and kids can even visit Toy Land!

Whether you choose to visit these parks with your family or friends you’ll find you’re just a big kid at heart!  Get out there and have a blast!