Posted on Published: May 25, 2021 Categories Entertainment, The Bachelor

Bachelor Matt James and Rachael Kirkconnell Talk “Moving in Together”

Thanks to an E! News exclusive, here is the scoop on Matt and Rachael’s relationship!

Will Matt James and Rachael Kirkconnell Move In Together?

Apparently this Bachelor Nation couple is gearing up for quite the summer romance! Since revealing their breakup on After the Final Rose, Matt James and Rachael Kirkconnell are back together and closer than ever!

A source close to Matt tells E! News that, “Matt and Rachael are in a really good place right now and are getting serious. They are inseparable and talk all day, every day. They have been making many plans to see each other so not a huge chunk of time passes before their next visit.”

The two continue to make time for each other, no matter what coast they are on. They’ve been seen together in Florida and California.

The source even mentions that Matt and Rachael plan to get much closer saying, “They have discussed Rachael moving to New York City to be closer to Matt and she has always loved the city, so it would work out well.”

Also, the source mentions that, “They are both taking it slow, but have talked about moving in together. It is an option they are considering, but waiting to see how the next couple of months progress.”

After giving Rachael Kirkconnell the final rose of the season, Matt James and Rachael’s relationship was rocky to say the least. The couple broke up after racially insensitive photos of Rachel gained attention, and Bachelor Nation thought they were over for good.

However, the pair seems to have completely made up and seem very happy together! The source also tells E! News that, “Matt is truly in love with her. They have a special bond and have really turned a leaf in their relationship.”

We still do not know if or when Matt James and Rachael Kirkconnell are officially moving in together, so we will have to wait and see!

Get ready for Bachelor in Paradise with all the right products! Show off your love with stickers, towels, wine glasses, a John Paul Jones mug and so much more! 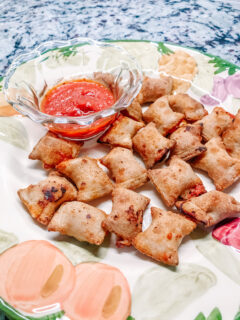 Next
How To Cook Frozen Burgers in the Air Fryer | Easy
Click here to cancel reply.