Since 2014’s Maleficent, Disney has been trying to reboot, remake, and reimagine any and all of their popular animated IP. Some of those attempts have been successful, while the rest have been somewhere between bad and okay. Cruella is one of the more successful entries and definitely the most unique.

Directed by Craig Gillespie, Emma Stone stars as the titular villain. The film opens in 1964 UK, where we meet Estella, a young girl with a tendency to cause mischief. After getting in trouble, Estella is expelled. Her mother packs their stuff up and heads to London. They stop at Hellman Hall, where her mother needs to speak with someone. Estella sneaks inside the mansion, where a fashion show is taking place. With dreams of becoming a fashion designer, Estella is enamored. It isn’t long before she is caught, however.

While trying to make her escape, Estella causes a scene. She makes it outside in time to see her mother fall to her death. Now an orphan, Estella must find her own way. She meets Horace (Paul Walter Hauser) & Jasper (Joel Fry), petty thieves. The three continue their dishonest ways, as they grow up. Estella is able to utilize her skills as a fashion designer, while creating disguises. Ultimately, she wants more. She is given that chance when she receives a letter offering her a job at Liberty of London. After one drunken night, she wows The Baroness (Emma Thompson), London’s famous fashion designer, and gets a job working for her. Meanwhile, her alter ego, Cruella, the Banksy of the London fashion scene, becomes The Baroness’s enemy.

A Style of Her Own

The thing about Cruella that sets her apart, both as a character and as a film, is her style. As an aspiring fashion designer, Estella immediately impresses The Baroness. This is completely believable, as the costumes designed for the film are one of a kind. Gorgeous, sleek, and somehow both of a time and thoroughly modern – It is unsurprising that a film engulfed in the world of fashion would have such a strong focus in this one area. Additionally, the production design brings 1970s London to life in surprising ways. From the stores to the mansions to the city streets, it feels of its time. These are not the only aspects of the film that stand out, though.

As he did in his previous film, I, Tonya, Gillespie directs Cruella with a bit of flair that keeps the film feeling fast and loose. Unlike previous Disney live action remakes/reboots, which have fallen into the trap of copying their predecessors shot-for-shot, Cruella has a voice of its own. Its quick pace is marked by needle drops that make you think, “hey, I know this song,” every ten minutes or so. To some viewers, this may be grating, but I would be lying if I said it didn’t work for me. Like I, Tonya, Gillespie is playing the hits but they are hits for a reason. They keep the movie feeling light and fun, even if they can be a bit too on the nose.

Beyond the technical aspects, Cruella is bolstered by its cast. Unlike some other recent Disney films, this cast seems totally invested in their characters and the roles that they play within the story.

A Cast of Characters

Despite getting her start in comedic roles, Stone has mostly stuck to dramatic roles recently. While she has had great success, it’s a shame that audiences have not had many chances to see her comedic chops. While playing a notorious Disney villain, Cruella allows Stone to have fun. She is clearly having a good time in the role and it rubs off on us too.

While having fun, Stone’s range is on full display. Playing both Estella and her alter ego, Cruella, she creates two distinct characters. Estella is a thief, who steals because that’s all that she knows, while Cruella is a narcissist who only has one goal: to get revenge on those who have wronged her. It won’t be Stone’s path to another Oscar, but it is genuinely good work. She continues to present subtlety in the way that she can say so much by the slightest smile or pause, even while playing outlandish characters with huge personalities.

At odds with her is The Baroness, played with over the top exuberance by Emma Thompson. Blunt, creatively savvy, and unnecessarily cruel, Thompson’s performance recalls that of Meryl Streep as Miranda Priestly in The Devil Wears Prada. Although Streep’s performance feels like an obvious blue print, Thompson is still able to get some mileage from it, as her and Stone go toe to toe with one another.

As Jasper and Horace, Joel Fry and Paul Walter Hauser bring a sort of juvenile charm to the film. The men are willing to follow Estella to the ends of the earth and their presence makes for some of the film’s most entertaining moments. Rounding out the cast is Mark Strong, who is given far too little to do, as John the Valet.

Despite all the positives I have for the film, it does have one glaring issue. At 135 minutes, Cruella is way longer than it needs to be. With its style and fully onboard cast, it’s a genuinely fun movie. That fun wears thin over the course of its runtime. Long movies are not inherently bad but they have to justify their length. The story is entertaining but it is not overly complex, with several loose ends to wrap up. It could have been tightened by 20-30 minutes and been more successful at what it was trying to accomplish.

Additionally, there are a few minor characters who are treated like they are more important than they actually are onscreen. For example, Cruella meets a shop owner named Artie early on in the movie. He disappears for a large chunk of the film and then reappears in the last hour, as if he was a part of the group the whole time. It’s not deal breaking imperfection but it is noticeable.

At over two hours, parts of the film start to feel repetitive and we begin to lose interest in the story and how it will wrap up. The fact that that’s happening and we have seemingly important characters that we don’t know much about makes both flaws a bit more apparent. Sticking the landing is a big part of creating a film that works and unfortunately, Cruella does not entirely do that.

Despite its flaws, Cruella is still a fun way to spend an evening. At the very least you will be treated to some extravagant performances from Emma Stone and Emma Thompson, who both seem to be enjoying their devilish turns. The costume and production design make this a Disney reimagining that seems to have some care put into it.

It is not the same old retread of a sixty year old film that we have come to expect. Cruella has its own distinct style and, some winks and nudges aside, feels like it is very much its own thing. It does not reinvent the wheel but it at least gives the wheel a tune-up and, honestly, sometimes that’s enough to get by.

Come for “Godzilla vs Kong,” Stay for Not Much Else – Movie Review

Previous
How To Cook Frozen Burgers in the Air Fryer | Easy 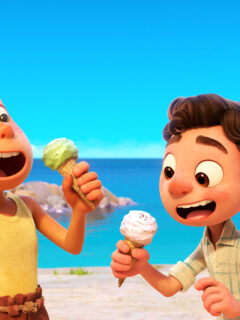