The 1920s were the era of intrigue, mystery, radical change and rebellion. They were the years of jazz music, Coco Chanel, prohibition and of course, F. Scott Fitzgerald and The Great Gatsby. Everyone associates the Roaring Twenties with glitz and glam and that is perhaps the reason the 1920s era is still as intriguing as ever, almost a century later. Jazz music is still appreciated, Chanel is still the epitome of style and class, The Great Gatsby is still read in English classes across the country and 1920s fashion is more popular than ever. Especially now since the new Great Gatsby film starring Leonardo DiCaprio, Carey Mulligan and Tobey Maguire is due to be released on May 10, 2013 after months and months of stalling. We, at Sarah Scoop, are so excited for the new release but we are even more excited about the Gatsby-style fashions we have been seeing. Therefore, we are going to show you some of the hottest 1920s looks that will get you feeling like a glam Gatsby gal in no time.

First up is the famous flapper dress. This dress is very loose and hangs off the body in an almost “boxy-looking” way. Women had suffered restrictions in every aspect of their lives previously, including that or corsets and other undergarments. So, naturally, with their new-found freedom, those were the first things to go. These are typically worn as Halloween costumes but you could absolutely wear a flapper-esque dress as a nod to the 1920s. This cute flapper dress from ASOS is easy to wear. Flapper dresses are relatively flattering anyway because they don’t cling to problem areas and aren’t too short but this white color is great because it stops the dress from looking like a costume.

Next are accessories. The flappers were very fond of their hats and hair accessories. One of the major hats associated with the 1920s flappers were Cloche Hats. These hats are ones that you may recognize from some pictures of 1920s women. This hat was so low that there was a specific pose the women had to do when wearing these hats so their eyes could be seen. Cloche hats today are not that low so you won’t need to worry about walking into things or having to tilt your head back all day. This Cloche Hat from Nordstrom’s is the perfect hat for a 1920s look! 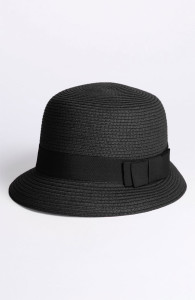 We all know that the 1920s woman loved her hair accessories. We have all seen pictures of women wearing hair bands with feathers coming out. You can also try this look without looking too over the top. A night out with the girls wearing a LBD is the perfect opportunity to jazz up your outfit (no pun intended)! This adorable hair accessory from ASOS is perfect for that occasion. It is not too dressy but just enough to give you a little added 20s sparkle!

A 1920s woman was glamorous. A signature hairstyle of their era was the short, blunt bob. Of course, you don’t have to take inches off your hair to get the flapper look but you can get some inspiration. One great hairstyle of the 1920s that was created to stop the bob from looking to harsh was the Finger Wave also called the Marcel Wave. You basically want to shape your hair into s-shaped curls while wet using your fingers and a comb. When dry, you’ll have beautiful waves. The Marcel was a little different as this look was similar looking but used heated equipment.

The 1920s loved their makeup. Gone were the demure days of the 1910s and the Gibson Girl. The 20s were the time for flirty, fun looks. The 1920s woman loved lipstick. The lips were made to have a very prominent Cupid’s bow – that was the “hot” look of the time. Blush was used to get a nice, rosy color and mascara was heavily used to get long, luscious lashes. Eyeliner was also used to make the eyes darker. Basically, everything was darker. More seductive. More vibrant. More entrancing.

The last thing you need to complete your 20s era look is a little ATTITUDE. These women had attitude and a little sass! They had so many more opportunities and so much more freedom and they absolutely took advantage. Although, we still have a little way to go, we owe a lot to these carefree, fabulous women. They paved the way for the lives we lead today and the least we can do is show a little appreciation through replication…