Hollywood Stargirl is a beautiful Disney movie directed by Julia Hart that follows friendships, love, and dreams. Based on the characters from Jerry Spinelli’s novels, Stargirl finds herself heading to California to start anew after her mother receives a promising job as a costume designer. In California, Stargirl begins to find the possibilities of living her innermost dreams.

Here is the scoop on the cast of Hollywood Stargirl!

Grace VanderWaal plays ‘Stargirl’ in Hollywood Stargirl. Her character in the inspiring movie has similar qualities to VanderWaal including being a songwriter and an artist who uses the ukulele. She has also played in Stargirl and Christmas in Vienna.

Elijah Richardson becomes the boy named Evan that helps Stargirl figure out her dreams. He is known for his roles in The Falcon and the Winter Soldier.

Julia Hart is the director and screenwriter for Hollywood Stargirl. Julia’s roles change depending on the project but she is also an actress. Her most known projects include Miss Stevens, the drama, Fast Color, and Stargirl.

Julia comments on how the experiences differed between making the first and second movies. “It was so special to get to shoot it in LA where I live. We made the first movie in Albuquerque, which is one of my favorite places to make movies. But it was really wonderful to get to stay home and to get to show the LA that I love in a movie that I made.”

Grace gives her thoughts about returning to the screen as the lovely Stargirl. “It was very exciting because I feel like after seeing everyone love Stargirl it really made me appreciate and be honored even more to play her character. So, it was very nerve-wracking, but I just feel like I just slowly grow more and more love for her. And just so happy to get to play her. She’s growing up. She’s seeing the world, and experiencing different things.”

Tyrell and Elijah mention their connection when onset. Elijah reveals that “I think that we’re exactly alike. We have the same passion. Me and Tyrel actually clicked in the chemistry reading like it’s nothing. He automatically felt like my brother. So, when we got on set we were just saying lines at that point.” Tyrell follows up by saying, “yeah, it felt so easy and seamless. Like, from the first chemistry read, from the first auditions even. As soon as we got on set, it was just like, oh, it’s going to be like this? We have nothing to worry about.”

Grace and Elijah mention their connection with one another when filming, Hollywood Stargirl. “We had to kind of work to get that bond because at first, we were like, um, okay, this is you… But eventually, we started to hang out more and we started to realize that we had a lot of things in common. You know, we all like food, so we went out to eat. So, after a while, we started to click.” Grace says “I think we were really shy. We were all really shy and then like, I feel like that was it.”

The cast of Hollywood Stargirl talks about their favorite memories on set. Tyrel mentions that “we were shooting a bunch of the scenes in [Forte?], which is like an important location in the film.  And we were shooting them in a soundstage that would get very, very hot after we would do several takes. So, we would all be in there like, having a great time like dancing and laughing with each other. And then after a few minutes, we would like, all look at each other be like, this is great, I can’t take this anymore. Can we please go outside? Then we’d all run outside and like get iced coffee and cool down. So those are the moments that I look back on.”

Grace comments further by saying “Oh, I forgot about that. I think that’s my favorite memory. When you said iced coffee, I completely forgot all about that. Also, the beach. I know. And I love watching that because a lot of that was B-roll of us just like, that was at the very end of that day and it’s just nice to see that that was a literal moment. Yeah, that was a good day.”

Elijah talks about his favorite part by revealing that the “specific part was when we were running up this hill. Because me and Tyrel were actually racing. We were racing up the hill and then Julia was like, no, no, slow down, slow down.”

Julia Hart comments on the decision to take Stargirl’s journey in a different direction than that of the sequel in Jerry Spinelli’s book series. “But I was excited about taking her out of Mica and into a larger world.” Hart further comments on the perspective of Hollywood Stargirl. “The most exciting thing for me about making the sequel and the most important thing to me was that the movie be from Stargirl’s perspective. Because the first movie and the first book are obviously from Leo’s perspective and it’s how he sees Stargirl. And so it was really exciting to just get to have a whole movie through her eyes and her mind.”

Grace mentions her thoughts on creating another song for the Disney film. “I was really nervous ’cause I was like, “Oh god, everyone thinks I can do this. And I’ve never done it before.” But it worked out. I did it. And it was easy. But yeah, it was really, really fun. I was so honored that I got to write a song for the movie again.  ‘Cause I love writing and I love the movie and it was fun.” Grace dives deeper into the songwriting process for Hollywood Stargirl. “Well, it was really, really hard because Elijah, you weren’t casted yet. So I couldn’t even get myself in the, like “Oh, I’m writing a love song,” I had no… This was so early on in the process.”

What Audiences Should Know

Julia Hart mentions how long it took for them to create the song. “They really went away and wrote that song in two days. It was incredible.” Grace also reveals that “it happened really, really easily too. I was, just told what I already kind of, like, felt the vibes of. Just that kind of feeling of, like, ooh, when a friendship is kind of maybe starting to blossom into something more and it’s innocent and it’s exciting and then, feels like you’re a kid but it also feels like oh my god, I’m growing up and I get to experience this.”

For the scoop on more Disney fun, visit these: 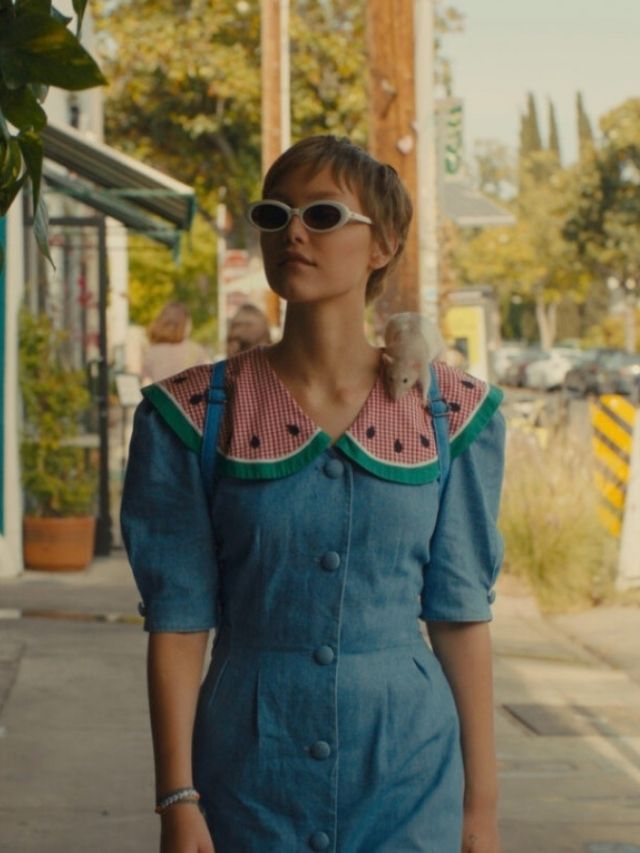