Get into the holiday spirit with a new instant classic! Home Sweet Home Alone is the latest addition to the Home Alone franchise. This sweet story about family will have you laughing hysterically! 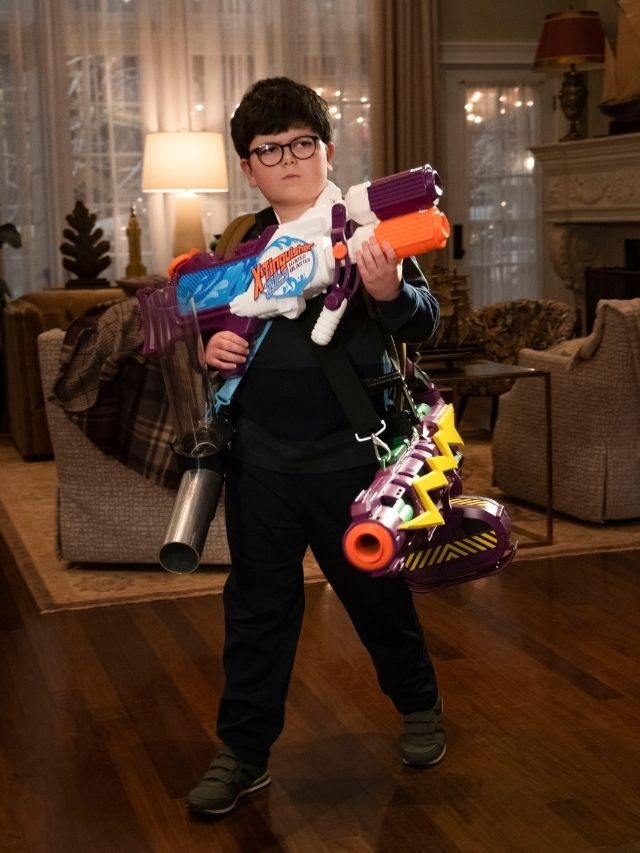 The Scoop on “Home Sweet Home Alone”
View all stories

The film follows the story of Max and his family as they face financial struggles. With lots of heart, iconic traps, and funny lines, Home Sweet Home Alone is sure to put you in the holiday spirit.

Catch this new film exclusively on Disney+ on November 12!

Here is the scoop on Home Sweet Home Alone!

Archie Yates plays the lead role of Max. Fans will also recognize him from his role as Yorki in Jojo Rabbit.

Ellie Kemper portrays Pam. Fans will also know her from “The Office” and “Unbreakable Kimmy Schmidt.”

Rob Delaney is Jeff. Some of his other notable works are Deadpool 2 and Hobbs & Shaw.

Aisling Bea plays the role of Carol. Aisling’s other works include “Living With Yourself” and “This Way Up.”

Ally Maki plays Mei. Some of Ally’s other works include Toy Story 4 and iCarly: iGo to Japan.

All About the Action

Like any great Home Alone movie, Home Sweet Home Alone is full of wild action and crazy stunts. Rob Delaney reveals what it’s like preparing to do all of these stunts for the film. Delaney says, “I mean, we started stunt training well before we started shooting, thank goodness. And we were really required to do most of the stunts in the film.”

He clarifies, “Yes, professional stunt people did them as well and if we did a bad job, they edited them in, but they really put us through the paces, which frankly, was shocking to me because I thought that I would just have to dip in for a humorous rejoinder now and then.”

Rob continues, “But they’re like, ‘No, we’re going to require you to be in the entire film and doing the stunts,’ which was scary, educational, and really very fun.”

Ellie Kemper adds, “It turned out to be a lot of fun. I hadn’t done anything like that before. It was challenging but also funny and athletic in a way that I wasn’t expecting.”

The original Home Alone movie follows Kevin McAllister, a young boy left home alone while his family leaves for a Christmas trip. Archie Yates talks about how the original film inspired his acting in this latest installment.

Yates says, “I did take a lot of inspiration from the original Home Alone movies.” He adds, “I religiously watched them every year at Christmas.”

Yates continues, “It was pretty easy for me to relate [to Kevin]. But then again, Max Mercer is supposed to be a completely different character from Kevin McAllister. So while I did want it to be the classic, ‘Ah,’ I also wanted it to be more original and a bit different because that’s what this film is all about. It’s the same universe, but it’s a completely different story.”

Paying Homage to The Original

Aisling Bea talks about another moment from the original Home Alone she wanted to honor in the latest film. Bea mentions, “The emotional moment of seeing your son again and that moment at the door.”

She adds, “That’s, I think because you get such a feeling from that moment.” Another detail she took inspiration from is, “The brown coat, that the mother has a brown coat.”

Ally Maki also shares what she hoped to emulate from the original film. She mentions, “Just purely the hijinx. I feel like we all grew up on this movie and just seeing the booby traps being set, I think we all wanted to have a booby trap house growing up.”

Rob Delaney also mentions, “In terms of the film Home Alone, we really wanted to have that real danger be a part of what we were doing. And it was easy to do because you’ve got projectiles headed at your skull at hundreds of miles an hour falling from great heights, actual fire and ice. So yeah, just making sure that the real peril was a part of this story was important to us.”

In the film, Ellie Kemper and Rob Delaney’s characters are married. Together they are working together to break into Max’s house and steal something of theirs that was stolen.

Ellie says, “Our mission was one inspired by, I think, goodness. I think we wanted, our motives were good. We wanted to see more family.”

Delaney mentions that he thinks Max is actually the villain. He says, “We’re trying to get back our stuff that we need to save our family, so throughout filming, I didn’t think of myself as a method actor, but the whole time I was like, ‘Oh, Max is the enemy.'”

He continues, “So when I watched the final film and you for felt sympathetic towards Max, I was like, “This must be a different film than the one I appeared in.” So certainly in watching it, I think there’s no antagonists but in filming it, I was like, “Max is my enemy and he must come to harm.”

Aisling Bea also mentions, “In Home Alone 1 and 2, you were very aware of who was bad and who was good. And now this time around, you can understand the burglars, where are they coming from emotionally in the movie. And I think there’s a lot more evil in young Max. So yeah, it’s a different balance as you can tell from his little face.”

Devon Ratray, who played Buzz in the original Home Alone films, makes an appearance in Home Sweet Home Alone. In this film, Buzz is now a police officer.

Ellie Kemper reveals, “He’s a fantastic actor and I was so happy that Devon could do this film. He’s brilliant in the scenes.”

Rob Delaney adds, “I mean, they’re seen together when I’m watching from a car. I’m watching Ellie charm him. I’m watching him and I’m like, ‘All right. That’s enough. That’s enough.’ He’s so great and charming. And the thing is, it’s not like a stunt to have him in. Yes, you’re thrilled to see him come back but he’s so good in this.”

Just like Home Alone before it, Home Sweet Home Alone is a fun-filled holiday movie. This story is one all families will love and it’s told through hilarious writing, great performances, lots of fun traps, and just a little holiday magic.

Be sure to watch Home Sweet Home Alone on Disney+ starting November 12!

For more great interviews check out these articles below: