Talk about a pinch me moment.  I got to interview the brains behind the movie, Guardians of the Galaxy vol. 2.  That’s right on my press trip to LA we sat down with Director James Gunn and Producer and President of Marvel Studios Kevin Feige to get the scoop on everything you wanted to know about GOTGVo2, yes that includes that information about Miley Cyrus that I shared earlier. Keep reading to find out more details from the men who really know everything you’ve been wondering about this iconic movie. 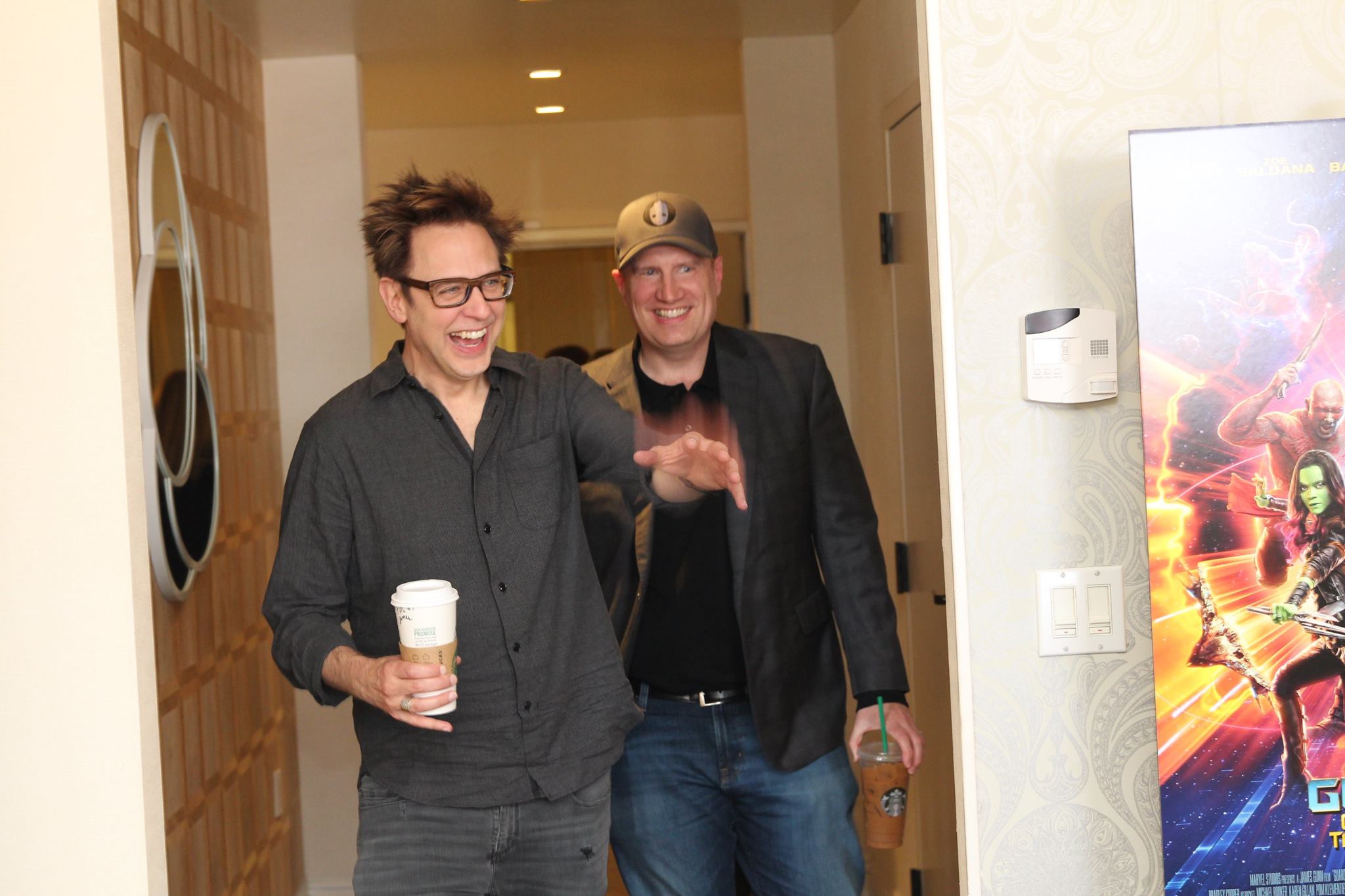 Can you tell us anything about the process of choosing the music for Vol.2?

JAMES: I have a list of about five hundred songs which I think of as Guardians-type songs that Meredith Quill might really love.  When I’m going through and I’m writing the script, I put the songs into the script where they seem to fit.  Sometimes I don’t have a song that seems right on that list, so I have to go out and search and listen to a bunch of stuff to see what I like.  Eventually, it’s all basically baked into the organic story of what’s happening in a movie, in the same way you put sugar in a cake.

There was one song that came from Twitter (“Wham Bam”). I had never heard that song. I mean, there’s nothing I get more tweets about than, “You ought to put this song in Guardians of the Galaxy.” I went and I played it. I’m like, “This is a really cool, total seventies pop song that is so different.” I had to go and do some research on it and then I put it in the movie.

KEVIN: What’s so amazing, and it was like this on the first one too, a lot of screenwriters put song suggestions into their scripts. Almost none of those songs end up in the actual movie.

JAMES: I remember when we did our very first test screening because we had written all of the songs into the movie. All of a sudden, somebody commented, “The music is great.”  I remember (Kevin) going, “Oh. Thank God; thank God.” It’s like, if people said the music is weird and they hated it, then that would have been big trouble.

How do you initially put music into a script?

JAMES: I write a very in-depth treatment. It ends up being about seventy pages long. That number’s a little bit high because I put a bunch of photographs in there of things that make us know what the feel of things are.  I like to do that first. I have a disk that I give to the four or five people that read that treatment and that disk has all of the songs on it that are in the movie.

Was it the intention for Star-Lord and Gamora to have a slow start when it comes to their relationship?

JAMES: Zoe (Saldana) and I actually talked about this for a long time at the premiere and at the party after the premiere. We try to treat these characters with such respect and such love. I don’t think that Gamora is a character who would be swept up in the moment by passion. If she was, I think she would have to deal with the ramifications of that. I don’t think she would be easy on herself about it. I think what we see between the two of them is such a truer love story. It’s a love that’s based not only on attraction, but on a really deep friendship that the two of them have. 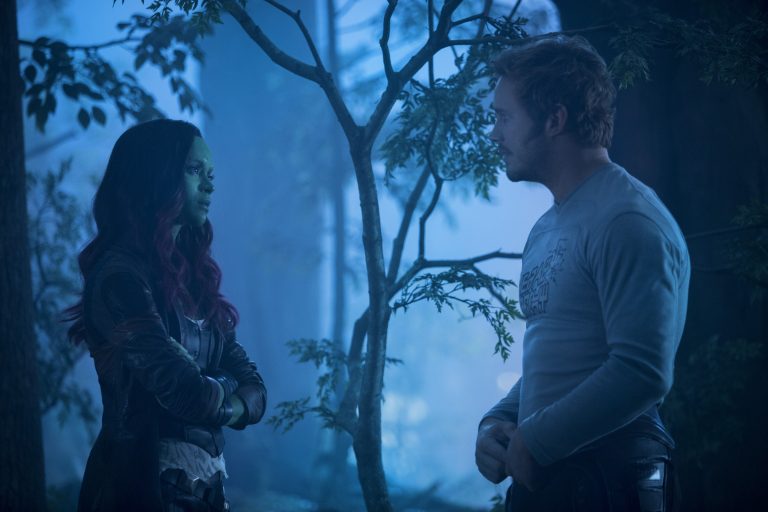 They’ve changed a great deal since the first movie. At the beginning of (Vol. 2), they’re great friends.  She’s a great support to him and he respects and loves her. I think seeing that emotional part of their relationship is a culmination of what their relationship is in the movie. It’s more powerful than seeing a kiss that is romantic and would make us feel happy and feel good, but wouldn’t be as true.

KEVIN: It’s the difference between a truthful, emotional moment and a Hollywood moment. It was very savvy of James to navigate that.

When the Guardians meet the Avengers, how will fitting a whole team dynamic into a supporting role work?

KEVIN: With all of the connectivity between our characters on various films, you have to be careful about it. I never want it to just seem like characters are popping their heads out of windows and saying hello and then going back in. A big role, a small role, regardless of the actual screen time that any single character has, it’ll be very meaningful and very important to the story that we’re telling. The film is shooting right now and we’ve already shot a lot of those interactions. It’s very exciting. 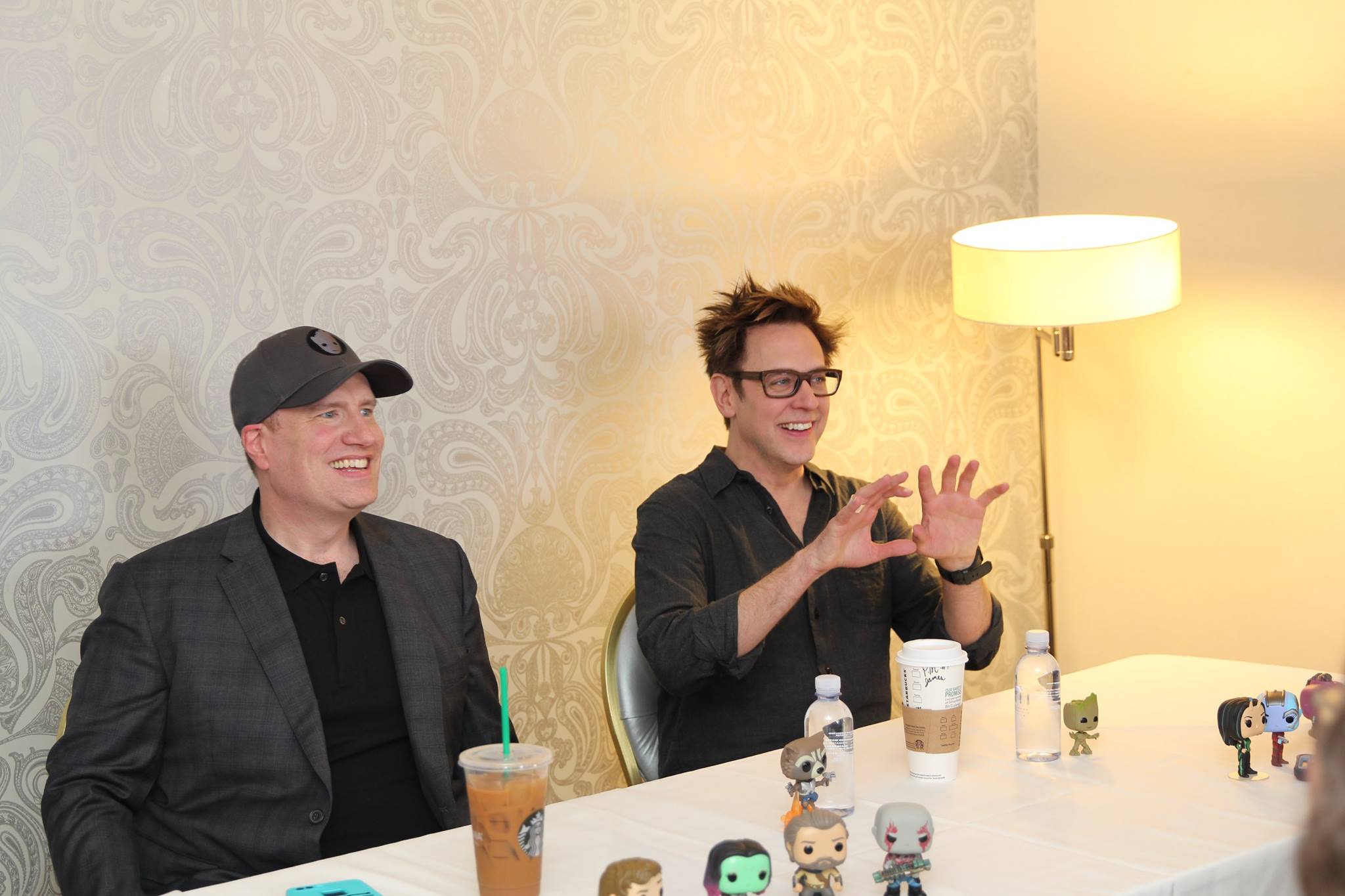 Can you tell us about the special cameo?

JAMES: Miley Cyrus has a cameo in the movie.

KEVIN: She is Mainframe, the talking metal head at the end.

JAMES: I’m a hundred percent serious. I was watching the voice, and I’m like, “She’s so likeable.”  Her voice is awesome.  I’m like, “She’s got the best voice.”  Then I wrote this thing and I went in and I said, “Kevin, what do you think about casting Miley Cyrus as the voice of Mainframe?” He was like, “Well, I’ll see if we can get her.”

This is by far my favorite part of the interview because well I tweeted it and it was crazy how quick the news spread.

Is it true that you (James) included your whole family in the film?

JAMES: My parents, my brother, my brother’s wife, my two nephews, and my niece are all in a scene. They’re credited in the credits. My dad is “weird old man” and (my mom is) “weird old man’s mistress” which my mom loved. My mom loves being the mistress.

I think the first movie really is about a relationship from a mother to her son. The second movie is about a relationship from a father to a son. It just may not be the father that we expect it to be. They’re all very imperfect characters, but, my parents loved me. My parents would be the first to admit it was not the easiest upbringing, but they loved me. I think at the end of the day, that’s what’s most important. And I think that’s the point of the movie.  I think these characters love each other and as hard as it is for them to express it to each other, especially Rocket who has almost an impossible time taking it in at all, that’s what the movie is about.

How do you (Kevin) pair directors with the right movies?

KEVIN: It’s a leap of faith, to some regard.  A lot of it is, “Do we want to spend, in a worst-case scenario, three years together and in a best-case scenario, ten years together?” We have a great team at Marvel Studios.  And in the case of Guardians, it was executive producer Jerry Malatchum and now executive producer Jonathan Schwarz who did the first round of meetings. They were the first people James met with.  They pitched the notion of this weird space movie with raccoons and trees.

JAMES: They pitched that idea to me. When I said goodbye to them I thought they were making a huge mistake.  I’m like, “You guys have done a great job so far at Marvel, but this is Bugs Bunny in the middle of the Avengers. You’re going to look like idiots.”  I smiled and shook their hands. I left to go home and I didn’t really think I was going to take the gig or pursue it in any way. Then on the way home, it hit me.  It really, really hit me. It was like seeing the first poster in my head on the way home. I realized what this movie could be and how it could bring color and heart into a big, franchise film. It could create the kind of space opera that I’ve wanted to do my entire life, so that’s how it started.

How did Chris Pratt get involved after that?

JAMES: I love Chris. I think that I’m lucky and that I’m good at casting. I’m able to see something in these actors that maybe somebody else doesn’t see. In the same way, I think Kevin cast me. I gave Chris an opportunity and Kevin gave me an opportunity. It’s that same thing of seeing.

KEVIN: James flew to North Carolina where I was working on Iron Man 3 at the time. He came in with that passion. Clearly, he was a great writer and clearly had done interesting work on a smaller scale.

JAMES: I wanted them to know that I was a camera guy. I’m a visual guy. Because I’d been very harnessed by lower budgets before, I wanted them to know that I knew how to put a scene together.  So, I drew my own storyboards and put together a large packet about visual references. I put together actors who I thought would be right for the roles.  My number one choice for Gamora was always Zoe Saldana.

How does your personal story connect to the guardians?

JAMES: I had a lot of success doing things in Hollywood. I always considered that my strength was that I didn’t really care. I would go in and I would pitch something. I’d be like, “Well, if I get the job, then I’m going to get money. If I don’t get the job, then I don’t have to work for a little while.” You know, I’m very lazy. This fact that I didn’t care, I always thought it was my strength. But, for the first time in my life, I really wanted something: the Guardians of the Galaxy gig. That honestly had never happened to me before. I had never felt it. It was a new experience for me in caring and it’s so funny because that’s exactly what the Guardians are about. 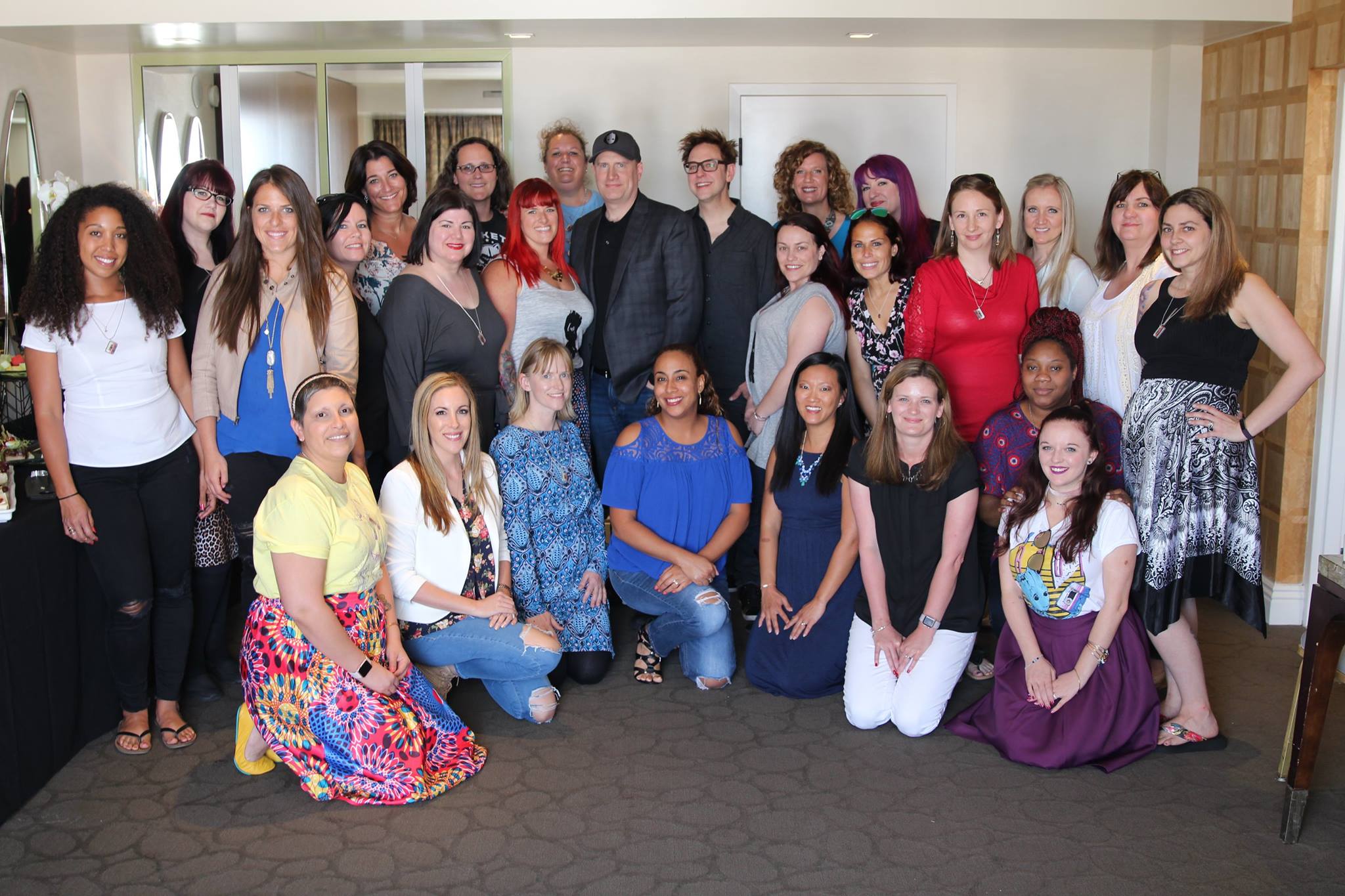 Make sure to catch her in Guardians of the Galaxy Vol. 2 and to check out my GOTG2 movie review for even more scoop.