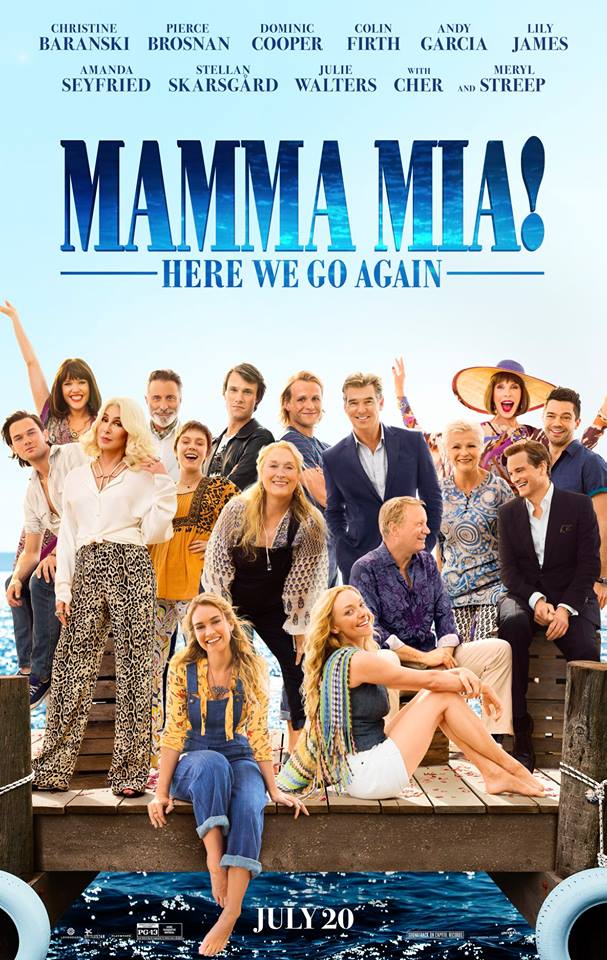 After waiting patiently for 10 years, the creators of Mamma Mia have finally given us the sequel we’ve all been waiting for!  Mamma Mia! Here We Go Again is in theaters today and I couldn’t be more excited.  The story follows Sophie (Amanda Seyfried) as she works to keep the memory of her mother Donna (Meryl Streep) alive in what was once her pride and joy — a run down hotel on the island of Kalokairi.  As she prepares for the grand opening of the newly renovated and modernized Hotel Bella Donna, Sophie wonders how her mother raised her all alone at such a young age. The film gives us a closer look at how young Donna (Lily James) fell in and out of love many times before becoming a mother and managing a hotel.  Mamma Mia! Here We Go Again is filled with all your favorite ABBA songs and you’ll definitely be going out to buy the soundtrack after you leave the theater.  Here are my top six favorite songs from Mamma Mia! Here We Go Again, in theaters today!

“Mamma Mia” has to be one of the most iconic ABBA songs since it was released more than 40 years ago.  As a heartbroken Donna thinks about some of the loves she’s lost, she belts out this classic with her best friends Tanya (Jessica Keenan Wynn) and Rosie (Alexa Davies).

“Dancing Queen” is another classic that has  definitely stood the test of time. This extravagant group number is one of my personal favorites from the film.

This finale number was featured in the first film as well as the second, and both performances are absolutely fabulous.  “Super Trooper” was a showstopper, as it featured the entire cast with incredible costumes and amazing choreography.

4. “When I Kissed The Teacher”

This song is the opening number of the movie and sets the mood for the entire film.  Instead of giving a speech at her college graduation, Donna performs this lively song and bids farewell to her professors and classmates.

“Angel Eyes” was definitely one of the funniest numbers of the film.  The song features Sophie, present-day Tanya (Christine Baranski) and present-day Rosie (Julie Walters).  This trio steals the show in a hilarious fashion.

If you thought this film couldn’t get any better, think again!  Cher belts out this song as Sophie’s grandmother alongside Andy Garcia in one of the most epic numbers from the movie.

Grab your friends and get ready to dance in the aisles because Mamma Mia! Here We Go Again is in theaters now!