Ron Simons is an actor and producer currently starring on Netflix’s The Defenders. He has won Tony’s, been a successful businessman, and has made many appearances on the big screen. He’s a busy man, but we had the pleasure of sitting down with him and getting the inside scoop! Check out our interview to learn more about him!

To start off, can you tell us what it is that you do and where we might have seen you before?

I’m an actor and producer of Broadway, film and TV.  In my producing role you may have seen me in publications such as Forbes, Black Enterprise, or heard me on NPR.  As an actor you may have seen me in various roles in a number of episodes in the Law & Order franchise, in film Night Catches Us, 27 Dresses, or most recently in a recurring role on the Netflix series The Defenders.

You worked at HP and Microsoft (and went to Columbia) before moving on to the entertainment world. What made you make that change?

I’d been a holding the dream alive of being an actor since I’d gone away to college.   Most of my English courses were in theater arts, but I chose to pursue business as my focus after college and became a software engineer for HP.  After I got my MBA and worked as a marketing manager at Microsoft, I decided that either I needed let go of, as Langston Hughes would say, “the dream deferred,” of just do it.  I decided I didn’t want any regrets about it later in life and I left corporate America and starting acting.  Then came grad school in acting and I was off to the races.

As a multiple Tony Awards winner, how did you first find success in producing?

I was extremely lucky that my first Broadway producing experience was on Porgy & Bess with Audra MacDonald.  I’d had the opportunity presented to me months prior to opening, but because of other work related duties, I didn’t take a serious look at the opportunity until about a week before we opened.  I literally hand delivered the contract to the lead producer at 5:00 PM the night before we opened.  We ended up winning the Tony for Best Revival… which was stunning and unexpected!  So the short answer is: luck.

If you could produce and/or star in any stage play or movie, which would you choose and why?

I’ve always dreamed of playing Walter in Lorraine Hansberry’s A Raisin in the Sun.  I love the play because it is about the kind of family I grew up in: working-class, inner city black family.  I love the role of Walter because he reminds me of some of the male members of my family who try to break out of the class in which they were born as they dream of a better life for themselves and their families.

How does the film/television world and the stage world contrast? If you could only do one for the rest of your life, which would you choose?

TV/film, as far as acting is concerned, is a very intimate art form.  The camera is often zoomed in so tight on your face that you can read every wrinkle in the brow and grimace of the face.  So much can be said with so little because the camera will blow you up to 4 feet or 20 feet.  There is no hiding from the camera.  Stage work can be markedly different as your face may not really be seen in an 800 seat theater.  In a theater, you have to project your voice so the entire room can hear you without you appearing to be yelling.  And then of course, there’s the small matter of takes.  There are no second and third takes on stage; when the scene is over, you move on.  If I could only do one for the rest of my life, I’d choose the screen because I’m much less further along in mastering the craft for TV/film.  So, that’d represent a challenge, at least in the short term.

Can you tell us about your character, Captain Strieber, on The Defenders and why you were drawn to portraying him?

Well, first off I’m a HUGE lover of all things Marvel!  And about the character, I liked that he had a sense of sarcasm about him and I found him playful to portray on camera.

Except for the last night of filming when we froze our butts off acting in the freezing cold outside, it was a very pleasant experience.  I actually had fun playing with my fellow actors on set.  I was lucky to have been acting with three of the four superheroes of the series.  The crew and cast were professional and no one had a holier-than-thou attitude.  The use of time was efficient and, most importantly, the food was always tasty!

I think a good beginning is to get more diversity in the roles offstage or behind the camera.  Like most businesses, the higher you go up in the industry, the greater the dearth of diversity.  More diverse people need to be groomed and prepped for leadership roles in arts and entertainment.  I believe the more the industry (and leadership therein) looks more like the consumers they serve, the more diverse content will become.

It’s obvious that you have a pretty busy life. How are you able to balance your personal life with work life?

t continues to be a challenge.  The business has consumed so much of my time that there’s very little time for things like relationships, reading (other than scripts and plays), or even keeping the house together.  When things start to unravel, I have a talk with my assistant to lighten the load of meetings and calls so that I can catch up on the personal front.  Meditation is a big help in calming the storm of a hectic life, so I do it as often as I can.

What’s an interesting fact about you that might surprise our readers?

I studied improve acting with Whoopi Goldberg many years ago at San Diego Rep.  We opened the class with improvisations of characters on Star Trek. It seems Whoopi was as big a fan as I was.  Little did I know that she would have a recurring role on the TV show years later.

What do you think the future has in store for you from here?

I’m hoping to continue to grow artistically and gain more business savvy.  I’m developing a couple of projects for TV, so I’m excited at the prospect for venturing into that unknown category.

Do you have any advice or words of inspiration for our readers?

Whatever you passion is: fashion, beauty, movies, fitness, food – pursue it with passion.  That’s where a good bit of happiness can be derived. 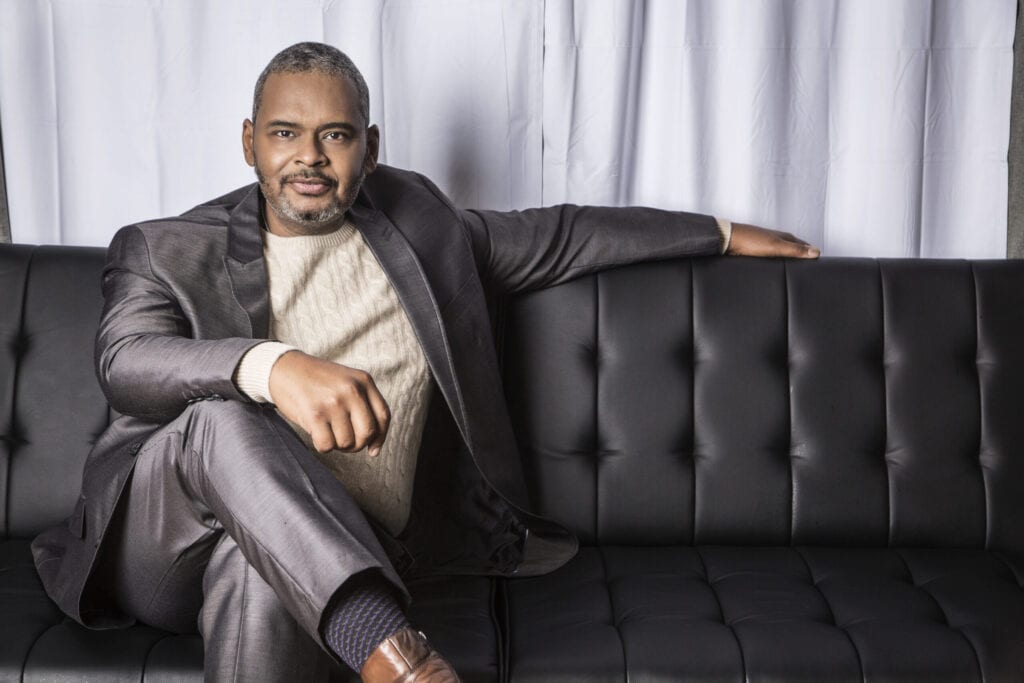 To learn more about Ron Simons, you can check out his website!

You can watch The Defenders now on Netflix!