The Scoop On My Upcoming Adventure to #D23Expo

Time is flying by and I can’t even believe my luck when it comes to attending the very best events.  Next week, I’m heading back out to California for the #D23Expo event.  This is the ultimate Disney event of the year and I’m honored to be attending as one of 25 influencers from across the country.

While, I’ve never attended before I’ve heard amazing things and feel so fortunate to be able to attend and get the scoop.  All the magic and excitement of the past, present, and future of Disney entertainment comes together under one roof when D23: The Official Disney Fan Club presents D23 Expo.

I am so excited for this amazing event. To celebrate attending, myself and the other influencers from across the country dressed as Disney characters.  Of course, I had to go with Belle. 🙂 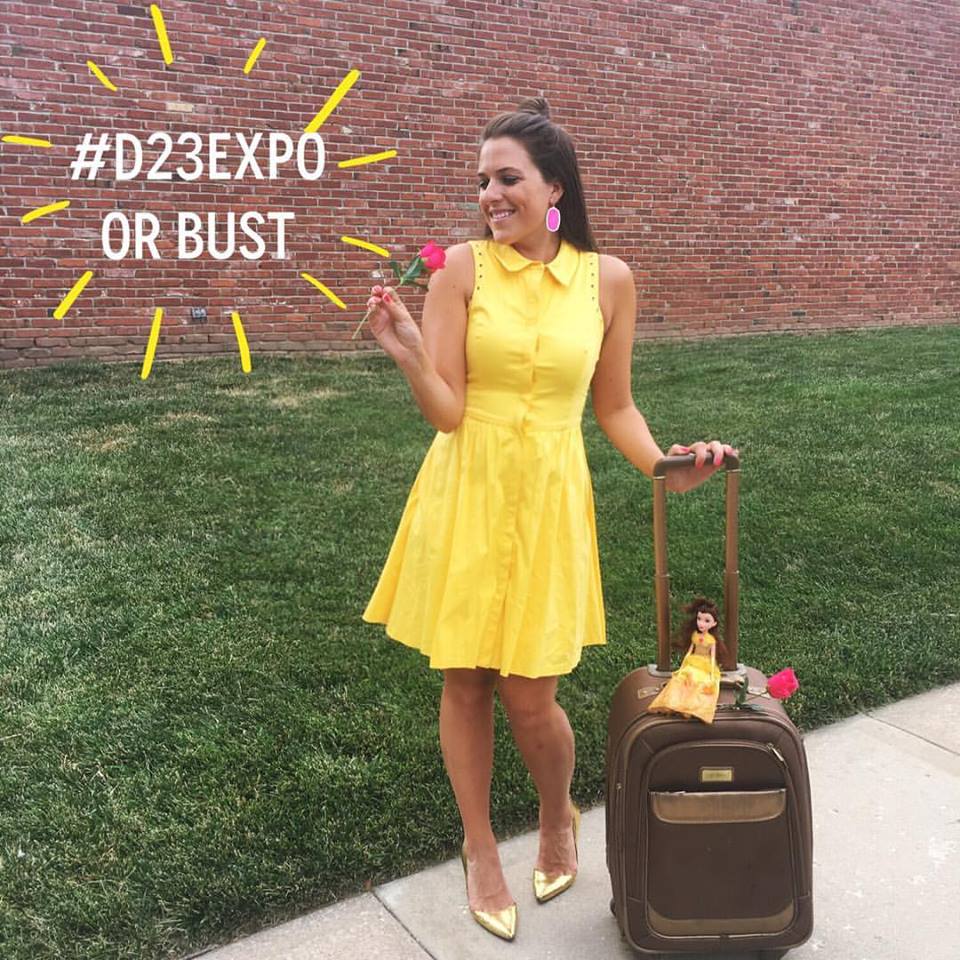 The D23 Expo fills the Anaheim Convention Center for 3 days.  It will be guaranteed fun with three magic packed days of presentations, pavilions, experiences, concerts, sneak peeks, shopping and more.  It is all about giving fans unprecedented access to Disney films, television, music, products, games, theme parks and celebrities. (Side note: Oprah is going to be there!!!)

So what will I be doing?

Like I mentioned above, Oprah Winfrey  is going to be there. Carrie Fisher, Mark Hamill, Stan Lee, Julie Taymor, and other remarkable contributors to the Disney legacy will also be honored as official Disney Legends during D23 Expo 2017. Hosted by Disney Chairman and CEO Bob Iger, the Disney Legends Award ceremony will be taking place and we are attending.  Of course, it will include special musical performances that I can’t wait to see. This year marks the 30th anniversary of the Disney Legends Awards. The first Disney Legend was Fred MacMurray (The Shaggy Dog, The Absent-Minded Professor, The Happiest Millionaire), who was honored in 1987.

The Walt Disney Studios is home to the biggest and most beloved brands in filmmaking today, with a number of highly anticipated projects from Disney, Marvel Studios, and Lucasfilm in the works. At the exclusive Hall D23 presentation featuring never-before-seen footage, surprise star appearances, and more, I will get a behind-the-scenes glimpse at an exciting array of spectacular films on the horizon from these world-class studios. You better believe I’ll be taking notes and sharing the scoop.

This is a 12,000-square-foot exhibit that will honor Disney’s treasured pirates from film, television, and the beloved Disney parks attraction that has thrilled guests from Anaheim to Shanghai. Hundreds of props, set pieces, photographs, costumes and never-before-seen items will be on display, it’s going to be Ahhhh-mazing!

Also on the show floor, the Archives will present “Fantastical Fashions,” a dazzling selection of dresses worn by beloved heroines and sinister villainesses. Costumes from six of Disney’s live-action fantasy films will be showcased including Enchanted, Maleficent and Beauty and the Beast.

Celebration of an Animated Classic: The Lion King

The Lion King Producer Don Hahn, Director Rob Minkoff, and animators Tony Bancroft and Mark Henn, along with some very special guests, reveal the secrets behind the making of the timeless animated classic.

I loved Ducktales in my childhood, what about you? This summer its making a comeback with a whole new series for the next generation!  In addition to taking a swim in Scrooge McDuck’s Money Bin, yes there will be photos… 😉 I’ll also screen the first episode, and have a Q&A session with Executive Producer Matt Youngberg and Co-Producer / Story Editor Francisco Angones.

This summer is the Summer of Heroes at Disney California Adventure and we will be spending a few evenings at both Disneyland and Disney California Adventure to experience the attractions, shows, food & more that make it a Summer of Heroes.  Yep, I’ll just call myself a summer hero. 🙂 I’m always up for an adventures so you better believe I’ll be first in line to give these rides a go.

Disney California Adventure park is officially the destination for adventure, intrigue and triumph as recruits from around the world –we will join forces with legendary Super Heroes in an ever-expanding universe of stories that will grow even bigger over time including the thrilling, rocking attraction, Guardians of the Galaxy – Mission: BREAKOUT!

This is just the beginning. I’m telling you this is going to be an incredible trip and I will be going non-stop to bring you the scoop on all things Disney! Please follow mine and my fellow influencers D23 Expo experiences using these hashtags:

For more on the D23 Expo you can get the scoop straight from the source: D23 Expo.

Also, make sure to follow me on twitter as I will be doing a lot of live tweeting during this fun adventure!