Disney’s Cruella tells the tale of one of the most iconic villains of all time, Cruella de Vil! Full of fashion, drama, style, and of course, dalmatians, this film takes a look at Estella and her journey to become Cruella de Vil. Cruella transports audiences back to 1970’s England for a journey of fashion and finding yourself. 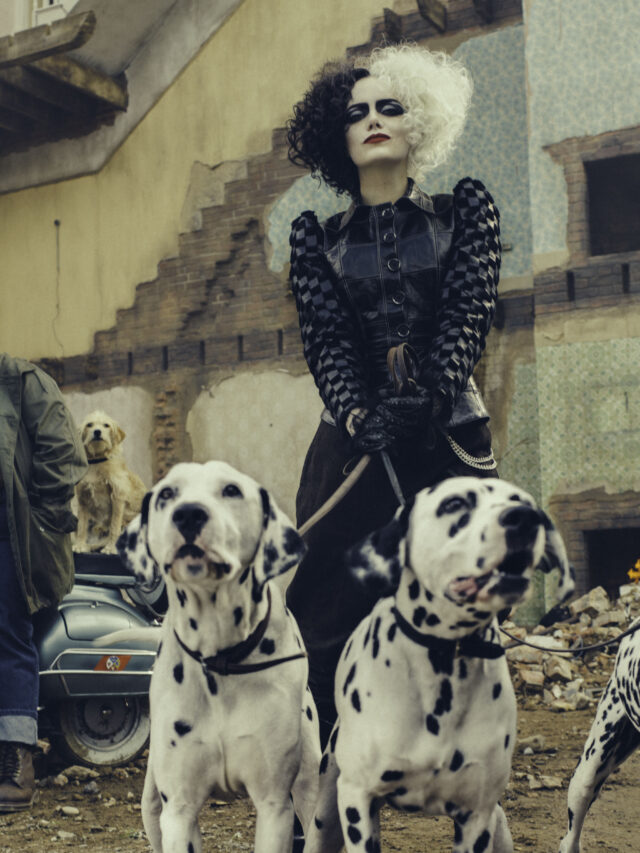 Don’t miss Cruella in theatres May 28th and also on Disney+ with Premier Access!

Here is the scoop with a fun interview from the cast and crew of Disney’s Cruella.

Emma Stone plays Estella, A.K.A. Cruella de Vil. Stone won the Academy Award for Best Actress for her performance in La La Land. She also received Academy Award nominations for Best Supporting Actress in both Birdman and The Favourite.

Emma Thompson plays The Baroness. Thompson won the Academy Award for Best Actress for Howards End and Best Adapted Screenplay in Sense and Sensability. Fans will also know her for her portrayal of Professor Sybill Trelawney in the Harry Potter films.

Craig Gillespie is the director of Cruella. Some of his notable works include I, Tonya and The Finest Hours.

Fiona Crombie is the Production Designer for Cruella. Crombie is known for her work on Macbeth, The King, and also The Favourite for which she recieved an Academy Award Nomination.

Nadia Stacey is Cruella’s Hair and Makeup Designer. Stacey’s notable works include Captain America: The First Avenger, The Girl with All the Gifts, and The Favourite.

Jenny Beavan is the Costume Designer for Cruell. She won the Academy Award for Best Costume Design in 2015 for Mad Max: Fury Road.

Director Craig Gillespie talked about his inspiration for the film. When asked, “What would you say was your primary goal when making this film about a central character that is renowned in history for being one of the most villainous villains of all time?”

Be sure to check out Top 10 Quotes From Disney’s “Cruella”!

Gillespie replies, “villains are always so fun to portray.” He further explains, “you just have, you know, more license to do things that aren’t quite appropriate or push the boundaries, and create these larger-than-life characters.”

He also explains why he chose to explore Cruella as a character.

“It was really important to me that it was not black and white.  Obviously no pun intended there with Cruella. But I wanted there to be this gray area and be able to empathize with the choices that she was making. And the situations that she was responding to. And I wanted to do it in a way that was really fun.”

Talking about which version of her character she found easier to play, Emma Stone says, “It’s interesting, because there is a sort of rejection of Estella that comes at a point, and Estella is sweet, but, she’s not fully embodied.  So I would say there is something about Cruella that’s pretty enticing because she just kind of is who she is.”

Stone further explains, “She’s in full acceptance and autonomy there.  So I am kind of interested in that Cruella world.  She does some things [and crosses some lines] that I don’t think I would necessarily cross.”

Smiling, she admits, “I sort of prefer Cruella.”

Cruella adds another villain into the mix with The Baroness, played by Emma Thompson. Both evil and beautiful, The Baroness is everything a Disney villain should be!

Thompson talks about the character saying, “I am very interested in the dark side of a female character because they’re so rarely allowed to be dark. You know, we’re all supposed to nice and good, aren’t we?”

The Baroness is a very selfish character who acts in her own self-interest. Emma Thompson explains her appreciation for the characters’ commitment saying, “I wouldn’t necessarily walk that path, her commitment to her own creativity is rather admirable and difficult.”

Disney movies always have incredible sets and designs to fully immerse audiences into a magical new world, and Cruella is no different! The film captures the energy and look of 1970’s London while still adding some extra Disney magic.

Production Designer Fiona Crombie talks about what it is like creating sets for such a huge film. She says, “I understood very early on the ambition with how the film was gonna be shot. Which was very much 360.  We were gonna see absolutely everything.”

Further commenting on how extensive the sets are she adds, “We just needed to have every little piece of detail in place.”

Encouragingly, Craig Gillespie chimes in saying, “It was so opulent. It was amazing.”

All About the Fashion

“I’m not a fashion designer, I’m a storyteller with clothes. In fact, in my real life, I have no interest in clothes. I just love telling stories with them.

Cruella de Vil is a fashion icon, so it only makes sense for her style in the film to be phenomenal. Academy Award winning costume designer Jenny Beavan talk about the inspiration for Cruella’s style in the film saying, “I think she comes out of the script and the story.”

Referring to the 1996 live-action film 101 Dalmatians, Beavan explains, “Because we know where she ends up about 15 years later as, Glenn Close. And so there was definitely, in my mind, it had to just be possible that this character could become that character.”

Beavan also talk about the specific style influences she looked at while preparing for the film and says, “I looked at Westwood and McQueen and Galliano, and BodyMap, and sort of dug into my past at Biba, just trying to really find all those funny things that we loved.”

Since the film depicts Cruella’s origin story and her entry into the fashion world, Beavan also talks about how Cruella makes her clothes by upcycling and reconstructing garments. She says, “I also just wanted to do a homage slightly to this modern thing where we are now reusing stuff.”

Making Up The Characters

The makeup in Cruella is spectacular, and the credit goes to Hair and Makeup Designer Nadia Stacey. She talks about creating the looks for both Emma Stone’s Cruella and Emma Thompson’s The Baroness, comparing the two. Stacey says, “It was just fun to have two strong leading ladies that you were designing for, but with completely different looks.

Stacey further explains the inspiration behind Cruella’s makeup saying, “With Cruella, she’s finding herself and testing and playing with things.”

She contrasts both women’s makeup saying, “There’s a kind of chaos to Cruella’s look, and then this completely clean, structured line to The Baroness.”

What The Audience Needs To Know

Disney’s Cruella is in theatres and available on Disney+ with Premier Access on May 28. It is an exciting story of self-discovery and staying true to yourself. Audiences will no doubt love the stunning fashion and visuals of the film as we get to look back on how one of Disney’s most iconic villains came to be.

Cruella has stunning incredible performances, stunning costumes, and a Disney fans finally get to know a classic villain through her dark and twisted story with a surprising amount of heart.

For more movie scoop check out Interview: The Cast of Disney Pixar’s Soul, Jungle Cruise Interview: Bringing The Disney Ride To Life + More, and Top 10 New Shows on Disney Plus!