2021 has proven to be the year of the musical and it continues with tick, tick… BOOM!

From Broadway adaptations like In the Heights and Dear Evan Hansen to original musicals like Vivo and Annette to whatever the hell Cinderella was, this year has been full of songs and dance.

With only two months of the year left, we still have a handful of movie musicals coming down the pipeline. One of the year’s very best is the Lin-Manuel Miranda directed and Andrew Garfield starring, tick, tick… BOOM! 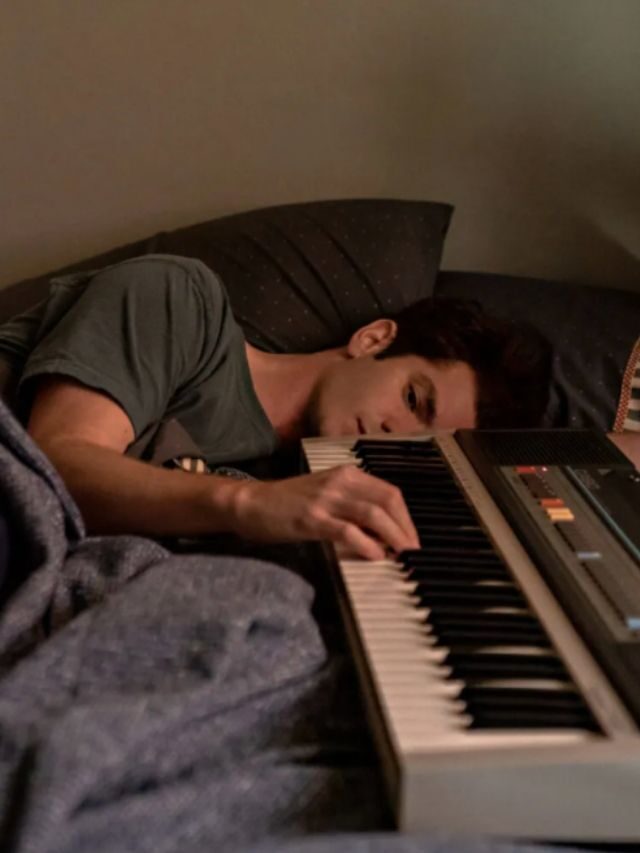 Man Behind the Songs

Andrew Garfield stars as Jonathan Larson, the man behind RENT – one of the most iconic musicals. But that is not what this film is about. Quite the opposite, as it states in the beginning. This is not about Larson’s hugely successful musical. It is about the man behind it and the obsessive drive that all creatives have.

The movie is set during a single week in January/February of 1990. Larson has been working on the same musical for over eight years, with little to show for it besides some catchy tunes, an abstract story, and, most importantly, high praise from his idol, Stephen Sondheim. High praise does not pay the bills though.

Larson is the epitome of a struggling artist. Writing his musical all night, working at a diner all day, and callously, though inadvertently, shrugging off his loved ones during the moments in between. Though we are diving into his life during this one week, it is made clear that this is who Jonathan is.

The only thing that makes it different this week is that he has his very first workshop for his show and is hoping to get noticed by someone with a lot more money than he has. Between the stress of making sure people actually show up to his workshop and making sure that his bills get paid, he loses sight of those who have been there for him all along. But they won’t wait forever. Time keeps passing. Tick… tick… tick…

If the ways in which I describe Larson make him sound selfish, it is because in some ways he is. He is fully consumed by his art to the detriment of his interpersonal relationships. They are crumbling around him and he does not notice. When he does notice, he does not care. Right now, the only thing he cares about is his musical.

With The Social Network being my favorite movie of all time, it only makes sense to be constantly rooting for one of its most underrated aspects: Andrew Garfield. Over the years, he has had some success but it has never felt like he has truly hit his full potential.

Garfield is always a captivating performer, even when the material is not up to snuff. Since his start, though, he has been in a never-ending search for the right role. The perfect melding of performer and character.

As Jonathan Larson, he has finally found it.

tick, tick… BOOM! has a lot going for it but Garfield’s electrifying lead performance is by far its most powerful weapon. With an almost exhausting amount of energy, he keeps the film moving at a quick pace. Larson’s work consumes his life to such a degree that he rarely takes time to rest and you can feel that wearing on him as the movie goes. He is running on fumes but those fumes have an addictive quality to them that he cannot get enough of.

He just has to keep going.

Not Your Normal Biopic

Jonathan Larson’s life being encapsulated in one week in 1990 is already a deviation from what we are so used to seeing in biopics. Add in the songs and we are really far away from something like Gandhi or A Beautiful Mind. But part of what makes tick, tick… BOOM! so special is the story behind it.

Originally conceived as a one man show, Larson wrote it as a way to come to terms with his rejections over the years. It was performed as a rock monologue, featuring only Larson and a handful of musicians onstage.

After Larson’s untimely death, right before the opening of what would become his most successful show and lasting legacy, this rock monologue was revised to become a three-person show. This updated version is what the film is based on.

I know that sounds confusing but to put it simply, the film has two timelines. One in which we see Larson onstage, performing tick, tick… BOOM! and one in which we see the events that he is speaking and singing about play out. Structuring the story in this way is successful for several reasons. Most notably, it gives the MVP Andrew Garfield the chance to shine even more. With several monologues, he is able to fully capture our attention and our emotions and not let go.

On a narrative level, though, it gives Jonathan Larson perspective that he did not have during that week in early 1990. We see how he was living his life at that time, but more importantly we see in his eyes and we hear in his voice, what those events mean to him now, years removed. With this perspective, the impact is far greater for both the reflective performer and the audience that is taking it all in.

From a story and performance standpoint, tick, tick… BOOM! is stunning. From a craft perspective, it does have flaws that, though admittedly minor, did distract at certain points.

Early on, some of the lighting was too reminiscent of soap operas. An artificial glow around certain characters and background objects was hard not to notice. As the film continued, I noticed it less and less but it was distracting enough that it caused me to stumble a bit before I completely fell for the movie.

Additionally, the film hits its peak about an hour and a half in but continues to move forward for a bit too long after that. I began to lose interest near the end but not nearly enough to completely ruin the goodwill that had been built throughout the first 3/4 of the film. A little extra trimming could have made the film near perfect.

Minor flaws aside, tick, tick… BOOM! is a joyous watch from beginning to end! Despite the stress, anxiety, and overwhelming hopelessness engulfing several of the scenes, the film is so full of life that it is impossible to leave it without a smile on your face.

Though it is hard to take your eyes off of Garfield, he is surrounded by other actors putting in solid work and they should not go unnoticed.

Robin de Jesus is particularly good, as the best friend of Larson who is the opposite of him in every professional way. Your heart will break for Alexandra Shipp, who plays Jonathan’s girlfriend, who is constantly cast aside in favor of his work. Even Billy Madison’s arch nemesis, Bradley Whitford, is given enough material to cast a large shadow over the film, despite his limited screen time.

The roles are so perfectly cast and performed that even with the focus being almost solely on Garfield’s Larson, by the end, you come to realize just how much you care about each character. It’s a special feeling to have a film connect with you so dearly. It is a feeling that I hope more people get to experience when the film premieres on Netflix.

As Jonathan Larson taught so many, there are 525,600 minutes in a year. Do yourself a favor and spend 115 of those minutes watching tick, tick… BOOM!

Check Out More of Our Movie Reviews!

“Dear Evan Hansen” is Great, Despite Its Flaws – Movie Review

“Shang-Chi” is a Solid, Yet Familiar Introduction to a New Marvel Hero – Movie Review

“The Suicide Squad” is a Bloody Good Time – Movie Review