Top 10 “Friends” Quotes of All Time

It’s been over two decades since the first “Friends” episode aired, and the American sitcom has surely left its mark. The show stars six friends who live in Manhattan, New York, and frequently visit their favorite coffee shop, Central Perk.

Throughout the show’s ten seasons, the ensemble shows the true meaning of friendship and relationships, while creating comedic references that have infiltrated pop culture.

After saying Rachel’s name, instead of Emily’s when reciting his vows, Ross is left distraught and wife-less. Rachel comforts Ross after Emily ditches their honeymoon flight, where he responds, “Same difference.” Very relatable Ross. We’ve all been there. Love can make us feel a wave of emotions, and many times even cloud our judgment.

The term “lobster” refers to a person who is meant to be with another person forever, and according to Phoebe, is because lobsters mate for life. Phoebe mentions how Ross is Rachel’s “lobster” throughout the show. It seems like everyone knew that Rachel and Ross were destined for each other, except the two of them.

3. “Hi, I’m Chandler and I make jokes when I’m uncomfortable.”

Chandler Bing is notorious for his relationship with Monica, his messy relationship with his parents, and especially his awkward, semi-self-deprecating sense of humor. What could be a more spot-on statement for Chandler? Sometimes we need a little humor to break the tension.

“Friends” (and this list) could not be complete without Joey Tribiani and his infamous pick-up line. He’s used this line throughout the entire series, and most of the time it works. Although, it’s probably Joey’s attractiveness and his suave mannerisms that win the ladies over, and not that phrase.

5. “Come on, Ross, you’re a paleontologist. Dig a little deeper.”

Phoebe is always coming up with witty comebacks to her friends, and they’re always a little personal but so spot on. It’s impossible to refrain from teasing Ross, especially when all he talks about is dinosaurs and his failing marriages.

In “The One Where Everybody Finds Out”, Monica and Chandler find out that Phoebe, Joey, and Rachel know about their relationship. The group is then determined to mess with each other to see who confesses first. Chandler and Phoebe pretend to have a love affair, only for Chandler to confess his relationship with Monica.

7. “Smelly cat, smelly cat, what are they feeding you?

We all love Phoebe and her bohemian, carefree lifestyle. None of her other performances at “Central Perk” were as popular as “Smelly Cat”. The song was mentioned in a total of five episodes, where we later discover that she heard the melody from her estranged father as a child. Who knew such a silly song could evoke so much emotion?

Check out this Smelly Cat PJ Set! You could wear it while snuggling with your cat, or while watching your favorite “Friends” episode.

One of the most famous reoccurring lines by Ross Gellar, and has caused controversy over the true definition of a “break”. In “The One Where Ross and Rachel Take A Break”, Ross and Rachel decide to take a break and Ross ends up sleeping with another woman. When Rachel finds out she’s insistent that it is cheating, and regardless of cheating or not, Ross probably shouldn’t have done that.

9. “Could I be wearing any more clothes?”

Chandler is known for his awkward diction, especially his infamous phrase, “Could I be any more….?”. In the second episode of the third season, Chandler and Joey enter a small feud, which ends with Joey in every single piece of clothing that Chandler owns–and none of his own.

In the series two-part finale, “The Last One”, Ross admits his love for Rachel, while she’s boarding a plane to Paris. She’s hesitant about what to do and boards the plane anyway, but of course, she got off the plane. After all, he is her lobster and there’s no way fans would have been satisfied with an ending that didn’t include Roschel(Ross and Rachel) together.

Rachel left her job at Ralph Lauren for Ross, that must be true love.

Not many shows can keep a cult-like following and continue to impact pop culture after nearly two decades since ending. HBO will be airing a “Friends” reunion in the near future, and we can’t wait.

Hope you enjoyed our Top “Friends” Quotes of All Time! If you’d love more “Friends” related information, check out the articles below.

For more scoop check out the following articles! 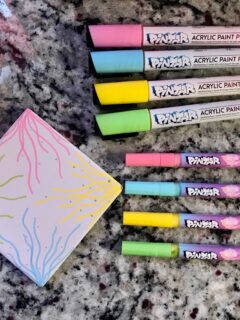 Previous
Pintar Make Your Own Coasters Kit Review and Giveaway

Next
Clare Crawley and Dale Moss: Back Together For Good?
Click here to cancel reply.