Hallmark movies have so many cozy couples who have starred within their films and TV shows! From couples who started and continued their chemistry on and off-screen, to those who prefer to keep their relationships Hallmark-free, and even to the suspenseful rumors to float about every so often, there have been many iconic duos that are still relevant today!

Whether these couples are still together and starring in Hallmark Christmas movies together or not, we still love to learn everything about them!

There are countless Hallmark movies and even more Hallmark characters falling in love! Whether they meet on blind first dates, at a train station, at a tree lighting ceremony, or after someone comes home from their tour of duty watching Hallmark movies is a great addition to the list of your family’s holiday activities.

The executive producers or Hallmark feature films and television series know that their fans love romance, so they don’t hesitate to deliver! Iconic romance actors like Hugh Grant in Notting Hill, Clark Gable in Soldier of Fortune, or Brad Pitt in Meet Joe Black paved the way for Hallmark actors to show off their romance acting, and we are so happy!

A romantic comedy kick off to your holiday season is the perfect way to get you in the holiday spirit!

Here’s the scoop on our favorite Hallmark couples!

The two met while filming and starring in Love Blossoms and began dating soon after in 2017! In February of this year, Webster popped the big question and Shantel said yes! Every good romantic movie is full of devotional thoughts and romantic gestures, and it looks like this one wore off on the actors!

VanSanten recalls the first time her now fiancé said he loved her! It was right after hiking to the top of a mountain! She was speechless!

Carlos and Alexa starred in Enchanted Christmas together after getting married in 2014! Soon after, They starred alongside each other in Picture Perfect Mysteries, which is their very own Hallmark franchise!

Alexa got her professional start in Little Giants, but most people will know her from Spy Kids. She was even nominated for a Young Star internet Award for her work in Ladies Man.

Fans will remember Carlos from his role in Big Time Rush. The couple’s sons and daughter look just like their parents!

The next Hallmark couple is Patti Murin and Colin Donnell! The pair wed in 2015, they are now parents of their daughter Cecily! Since the wedding, they have starred together in one of the most romantic movies Love on Iceland, which premiered in 2020.

The couple’s other works include original movies like To Catch A Spy!

This next Hallmark couple is so cute! Stine and Hendrix met while filming Virginia Minnesota back in 2016. Later, they filmed Midway to Love together after becoming a duo! Finding love on set led to them officially getting married in 2019!

Eric Winter and Roselyn Sanchez are proof that love is real! This couple starred in A Taste of Summer back in 2019!

Eric was described as a goof on set as the film was a romantic comedy, but Roselyn was much more serious about her role. It’s obvious that their chemistry was strong after being married for over 10 years at the time of filming!

Rumor alert! After starring in When Calls The Heart together, it is clear that Erin Krakow and Daniel Lissing have gotten close on set!

Lissing plays Erin’s boyfriend in the film, which leads us to believe that there may have been a spark between the two. However, the rumors were shut down once Lissing posted a sweet engagement photo with his wife, Nadia.

Erin Krakow’s other works include It Was Always You, directed by Michael Robison.

The Summer of Dreams star is married to Danny Dorosh, of Food for the Gods and It Must Be Love. Hutton and the Canadian actor have two lovely children and wed back in 2002! While Dorosh isn’t involved in Hallmark films, Hutton is making a name for herself on the entertainment channel!

Hutton’s love story with Dorosh isn’t the only one fans are talking about. Fans often think she is in a relationship with Kavan Smith due to their chemistry on-screen. Those rumors were finally put to rest! She has also starred in fan favorites like When Calls the Heart and The Perfect Bride!

Lacey Chabert, who portrays the iconic role of Gretchen Weiners in Mean Girls, has also made a name for herself on the Hallmark channel.

Chabert herself is married to David Nehdar! Although only Lacey is a known Hallmark star, Nehdar is a successful businessman who comes from a family line of them! Chabert is an accomplished actor who stars in many adored Hallmark films like Sweet Carolina, A Royal Christmas and The Christmas Inn.

Lacey is a very talented actor and she does an incredible job in all of her roles!

Promoting the Hallmark Channel Countdown to Christmas, radio host Lacey Chabert went on air talking all about the holiday movies!

After watching him star in When Calls the Heart, many fans were curious about Kavan Smith’s relationship status. The actor known for his role as Leland, reveals that he has been married for over 17 years now to Corinne Clark!

Clark served as the casting director for Casting Director for Stargate Atlantis & Stargate Universe. The Hallmark couple is now the proud parents of two sons!

Previously, Jack and Kristina were once thriving but they are no longer together! They were husband and wife for almost 13 years from 1993 to 2006. Although they divorced back in 2006, fate brought the two back on set together for the neverending story of When Calls the Heart! Fans love the show so much we may never see the final season!

While some people may view this as an inopportune run in with your ex, these two professionals are fine with it because they are part of the network!

After the divorce, Jack began seeing Melrose Place actress Heather Locklear. They began seeing each other in 2007 and announced their engagement in 2011, but later split.

Hallmark movies are always bringing beautiful love stories and also cute couples into our homes! Who are some of your favorite real life Hallmark couples? The next time you watch a Hallmark movie, be sure to check this list and see if the stars are a real couple!

While a surprising number of Hallmark actors are currently together or have dated in the past, there are still quite a few of our favorites who are not in relationships!

Let’s take a look at some of the most popular Hallmark actors and actresses who are still available.

Tyler Hynes is maybe the best actor Hallmark has! His works include titles like 12th Date of Christmas, The Mistletoe Secret, and a visiting businessman in Falling For You with Taylor Cole. He also played Vince Legare in TV’s 19-2.

Hynes keeps his personal life private, so are not aware of any relationships.

He’s even appearing in the new movie Roadhouse Romance on the Fall Harvest list opposite American Idol star Lauren Alaina! This film follows a country music fan Callie who tries carrying on her late grandfather’s legacy as she forms a budding relationship with a tv director Luke.

He shoes Lieutenant Callie Jackson the importance of looking to the future! Learn more about the film on Tyler’s Twitter account!

Some of Tyler’s other works include Tagged: The Jonathan Wamback Story which won him nominations for the Hollywood Young Artist Awards and the Positive Impact Award. He even worked with James Franco and Sienna Miller in Camille. He’s also won the Spirit of the Capital Award.

Hynes also appears in It’s Christmas, Eve. The Hallmark Channel describes the film, “As interim school superintendent Eve trims budgets, and now she’s in her hometown where it’s personal. Her handsome neighbor Liam is a music teacher and Eve feels his program must be cut. But luckily her friend is married to an IT guy, who’s created a website for donations directly to save the Arts program. Launched during the tree lighting ceremony, where Liam’s students will perform, the website could provide the Christmas miracle the town needs.” The movie even features music from Leann Rimes.

Eloise Mumford is another popular single Hallmark actress. She’s appeared in lots of Hallmark movies including The Baker’s Son and A Veteran’s Christmas.

Milne is another favorite Hallmark movie actor. This incredible human being appears in the television movie Runaway Christmas Bride. He’s also been in Summer Love and A Gift Wrapped Christmas.

His other popular works include Saving Hope and Rookie Blue!

Julie Gonzalo is another single Hallmark actress. She’s know for playing one half of the rival house flippers in Flip That Romance, opposite Tyler Hynes. Her other Hallmark Works include Falling for Vermont and The Sweetest Heart.

Also, Gonzalo’s been in Freaky Friday and Dodgeball!

The One Tree Hill actor took his career in a different role and transitioned into doing Hallmark films. Murray has appeared alongside Andie Macdowell in The Beach House.

Some fans will also still remember him as Austin Ames in A Cinderella Story.

This year, Tyler Hynes is starring in An Unexpected Christmas with Bethany Joy Lenz (also from Five Star Christmas). The story follows a couple Jamie and Emily who break up near the holiday season. Jamie doesn’t tell his family, so the former couple have to pull off a week-long ruse to give his family the impression they are still together.

After Emily endures this unusual girlfriend experience spending a little bit of time with Jamie after their breakup, they rekindle their feelings for each other! The premiere date is still TBA. This is your last sign to go watch your favorite Hallmark movies!

So the next time someone suggests watching The Mystery Files of Shelby Woo, Peter Benchley’s Amazon, or the Food Network maybe steer them in the direction of a classic Hallmark romance movie instead!

For more scoop on Hallmark check out 50 Best Hallmark Movies Of All Time and Ryan Paevey Gushes About Co-Star Erin Cahil and Talks Hallmark Success . Also check out The Top 15 Most-Watched Hallmark Christmas Movies, According to Viewers from Southern Living!

Shop these cute shirts, notebooks, stickers, and sweatshirts to show off your love of Hallmark movies! 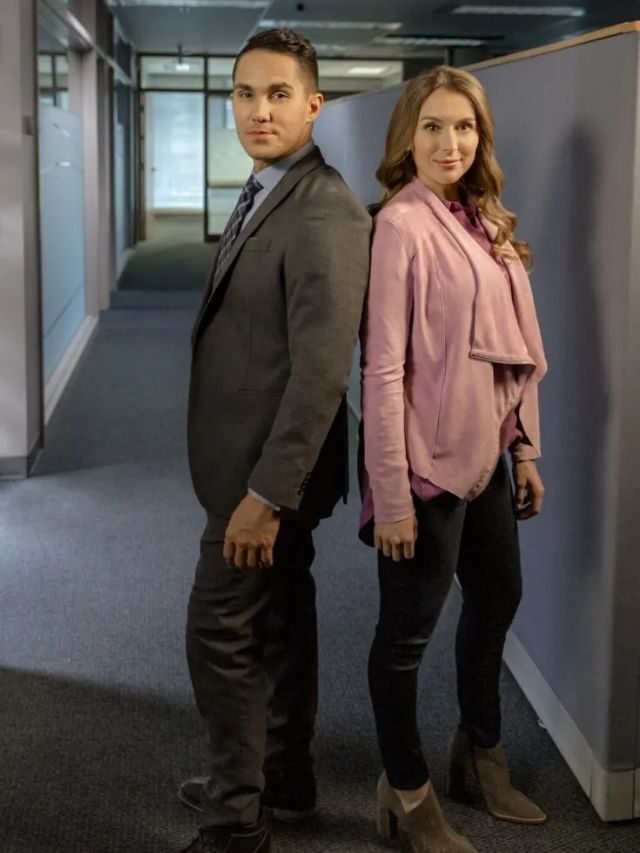