Disney’s Cruella tells the tale of one of the most iconic villains of all time, Cruella de Vil! This film takes a look at Estella and how she becomes Cruella de Vil. Cruella transports audiences back to 1970’s England for a journey of fashion, evil, and self discovery.

Emma Stone perfectly embodies the legendary villain in this fun film full of twists and turns! 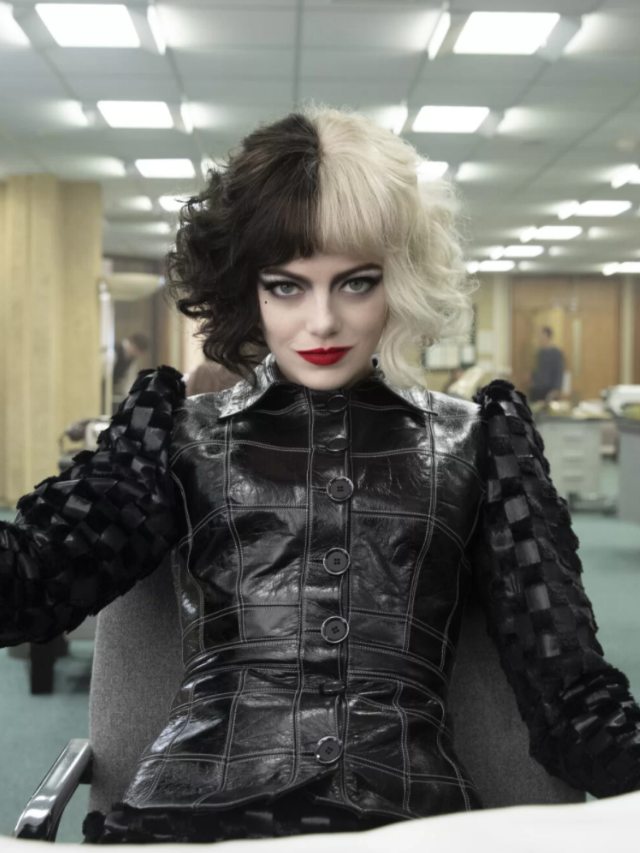 Cruella is full of friendship, drama, style, and of course Dalmatians, but also amazing writing. There are so many great lines, you will not want to stop quoting this movie!

Here is the scoop on the top 20 quotes from Disney’s Cruella!

Don’t miss Cruella in theatres May 28th and also on Disney+ with Premier Access!

20. “From the very beginning I’ve always made a statement. Not everyone appreciated that, but I wasn’t for everyone.” -Cruella

She may be a classic Disney villain, but Cruella makes a good point here. She understands that her unique talents set her apart from other people, and sometimes that will make you unpopular.

Also, she points out that you don’t need everyone to like or understand you in order to be special. Being true to yourself is what’s really important.

19. *tases employee* “That’s marvelous.” *tases another employee* “Oh, I could do that all day!” -The Baroness

In a hilarious scene The Baroness learns about tasers by using one on two of her employees. She tases them and they of course immediately drop to the floor.

Further solidifying her as a true villain, The Baroness simply marvels at how fun it is to use a taser on someone. She has no regard for the well-being of either of the people she’s hurt. She only cares if the weapon is effective.

Fans of the animated 101 Dalmatians will remember Cruella de Vil’s wild and dangerous driving skills. In Cruella, we learn that Estella never actually learned to drive but simply got in the driver’s seat and hit the gas.

This exchange between Estella and Jasper is a fun callback to the original 101 Dalmatians movie and further explains her character’s crazy driving.

When fans think of Cruella de Vil in 101 Dalmatians, they can instantly hear her voice saying “Anita, darling!” It’s one of her most memorable lines from the entire movie.

So it is only fitting that in Cruella, the writers put their own spin on the iconic line. For the character Anita, they changed her last name to Darling which makes her Anita Darling. Emma Stone’s Cruella then adds her own “My darling” to then end of her old schoolmate’s name as an extra flourish.

16. “Cruella was in a box a long time, now Estella can be the one who makes guest appearances!” -Cruella

When Estella takes off her red wig and replaces it with Cruella’s signature black and white hair, she becomes Cruella. She comments that “Cruella was in a box a long time” as in a wig box.

This moment is one of the first instances where she fully embraces her Cruella persona and leaves Estella behind.

When Estella first meets Jasper and Horace, it’s the day after her mom’s death and the trio narrowly escape a police chase. After they escape, Jasper and Horace realize that Estella doesn’t have a family.

Jasper invites Estella to join their gang, and this is the moment where the iconic band of thieves is born!

14. “They get in, they bite posh people who then froth at the mouth, their eyes spin in the back of their heads, and then the posh people die!” -Horace

When Estella, Jasper, and Horace plan to rob The Baroness, they need a way to get into her mansion. Horace poses as a pest control worker and tries convincing The Baroness’ guard to let him inside.

The guard does not believe Horace at first, but after his lengthy description and some help from his dog Wink, Horace makes it into the house.

13. “The good thing about evil people is you can always trust them to do something, well, evil.” -Cruella

In order for their plot against The Baroness to work, The Baroness needs to push Cruella off of a cliff in front of all her party guests. At the same time, The Baroness can’t know that she is being set up.

Thankfully, Cruella points out that you can always count of evil people to do evil things, so they built The Baroness attempting to kill her into their brilliant plan.

When Cruella first approaches Artie about her plan to outshine the baroness, she says, “I want to make art, Artie. And I want to make trouble. You in?”

This fun question is both playful and evil, highlighting Cruella’s villainous persona.

11. “Being a genius is one thing. Raising a genius however, does come with its challenges.” -Cruella

Looking back on her childhood, Cruella understands that she was clearly a unique little girl. Her mother went to great lengths to support her creative projects, and cruella realizes how difficult it must have been for her.

At the beginning of the film, Cruella is narrating her early life. Very much alive, she teases audiences by claiming “That necklace is the reason I’m dead.”

Right from the start, she intrigues viewers who are now wondering “What is so important about this necklace?” and “Why is she saying that she is dead?” Viewers can’t help but become invested in the story right away!

9. “From an early age I realized I saw the world differently than everyone else.” -Cruella

Cruella is different, to say the least. While it takes her some time to fully embody what makes her special, she is not afraid to use her strengths.

Cruella’s unique vision and sense of style are traits that set her apart, and it is fun for viewers to watch her grow and embrace everything that makes her special.

8. “I think you’re…something.” -The Baroness

While Estella is working for The Baroness, she wants her boss’s approval. The Baroness is very selfish, and even feels threatened by someone like Estella who is young, beautiful, and talented.

So, when The Baroness acknowledges Estella’s talent, even simply by saying, “I think you’re…something” it is a very big deal. Having her talent recognized by The Baroness gives Estella the confidence she needs to fully embrace her art.

7. “Ladies and gentlemen, I give you the angle.” -Horace

Estella, Jasper, and Horace work together as a team of thieves to rob wealthy people and provide for themselves. For their burglaries and pickpocketing, the gang organizes creative plans for how to go about stealing things like money and jewelry. While planning their heists, Horace often asks about the plan saying, “What’s the angle?”

So when the gang finalizes a plan to steal a necklace from The Baroness, Horace excitedly announces, “Ladies and gentlemen, I give you the angle.”

Running jokes like this in the film are what give Cruella its sense of humor and charm.

6. “Let me give you some advice. If you have to talk about power, you don’t have it.” -The Baroness

The Baroness has an unwavering sense of pride, and is not afraid to admit how ruthless and driven she is. She feels that she is the best and most powerful name in London fashion, and explains this to Cruella. Even though The Baroness is Cruella’s enemy, she does teach her a lot about power and confidence.

5. “I’m not sweet Estella, try as I might I never was. I’m Cruella, born brilliant, born bad, and a little bit mad.” -Cruella

After learning the truth about her family, Estella chooses to fully embrace Cruella in all her evil glory. In a heartfelt monologue, Cruella acknowledges everything that makes her different and fully embraces her true self.

This is a turning point in the film where Cruella leaves behind her Estella persona so that she can truly become the legendary Cruella de Vil.

4. “I like to say that ‘normal’ is the cruelest insult of them all, and at least I never get that.” -Artie

Estella’s amazingly stylish friend Artie is a welcome addition to the story. He and Estella bond over their incredible sense of fashion, and Artie perfectly sums up his style saying, “‘normal’ is the cruelest insult of them all.”

Even though his sense of style and how he looks may draw insults from strangers, Artie is grateful that nobody calls him “normal.” Artie is unapologetically himself in fashion and attitude, and this is a great lesson for viewers to take away.

Estella again teases audiences towards the beginning of the film by hinting at “lots more bad things coming.” Her playful delivery entices viewers to keep watching, and leaves us looking forward to all of the bad things coming our way.

Even though Cruella is a classic Disney villain, her narration helps viewers to see that being evil can be fun!

2. “You have that glint in your eye” -Anita Darling

Anita Darling makes a keen observation about Cruella. The glint in her eye that she refers to is something Anita remembers from when she and Estella were in school together.

Anita further observes that Cruella has, “a bit of an extreme side” that she still remembers from childhood. So, even though Cruella feels she is only starting to embrace her wicked side, Anita always knew it was there.

1. “They say there are five stages of grief: Denial, anger, bargaining, depression, and acceptance. Well, I’d like to add one more...revenge.” -Cruella

Even in her moments of grieving, Cruella is still resilient and ready for action!

Perhaps the most iconic line of the entire film, this sinister statement from Cruella shows that she is finally letting her evil side shine! After all, what is a villain without a plan for revenge?

Cruella has so many amazing quotes, but these are our favorites! Comment your favorite line from the movie!

For more Disney scoop, check out these articles: