Bachelor Nation loves sending their contestants on some wild and crazy dates. Whether the date activity is a little unusual, or the people on the date go a little wild, The Bachelor and The Bachelorette have had some pretty memorable dates. For shows that are all about finding love, sometimes the contestants end up finding their inner model or facing their greatest fears. 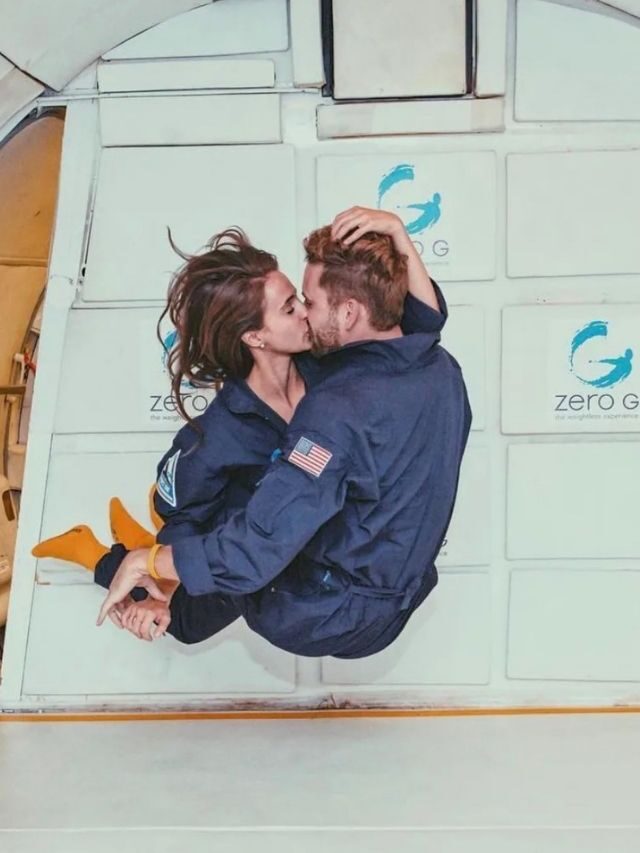 Nick Viall and Vanessa Grimaldi get to experience something very cool on their one-on-one date. For the date, they get on a plane that simulates the zero gravity experience of traveling in space!

This date idea is super cool and unique, but it simply does not go as planned.

Unfortunately for Vanessa, the zero gravity experience makes her nauseous and she throws up during the date. As if throwing up on a date is not bad enough, Nick surprises viewers at home when he kisses Vanessa afterwards.

In this group date, Alabama Hannah’s guys dress up in traditional Scottish attire and participate in different sporting events. Not only is it fun to see all of the guys in kilts, but we also get to see them showing off their athleticism!

The men participated in contests of axe throwing, racing with buckets of milk, and Scottish backhold wrestling. At the end of the date, Jed dumps a huge barrel of milk over his heads and it is safe to guess that he smelled bad for the rest of the day.

What seems like a fun and innocent date quickly turns into a dramatic event. On a group date with Ben Higgins, the women are told they will be getting into the ocean and feeding pigs.

Shortly after entering the water, the hungry pigs become aggressive and begin to chase around the contestants. The women all scream trying to get away from the pigs, but the animals are relentless. Contestant JoJo Fletcher is surrounded by pigs at one point and says, “This is like a bar in Dallas, there’s just pigs everywhere!”

Contestant Becca perfectly sums up the date adding, “I didn’t know I was scared of pigs until today.”

12. Concert With An Ex-Boyfriend

Peter Weber and Victoria Fuller’s first one-on-one date is one of the most uncomfortable dates in Bachelor history. While private concerts and musical guests are a staple of the show, usually nobody’s ex-boyfriend is present. Unfortunately for Peter and Victoria, this is not the case.

Peter is very excited for his date with Victoria, and he is thrilled to show her the final event of the evening. He says,”I have one more surprise for Victoria. We have our own private Chase Rice concert, and she loves country so I’m excited to surprise her.”

He brings Victoria to a private concert and the two dance while Chase Rice sings to them. Little does Peter know that Chase Rice and Victoria used to date.

Victoria explains, “We turn the corner, I see Chase my ex-boyfriend. Nothing could be worse.” When she later confronts Chase, he reveals that he did not know she was going to be on the date. The awkward reunion is a surprise to both of them.

Ben Higgins and Caila Quinn’s steamy date in a hot tub is not what you would expect. While Bachelor Nation puts contestants in hot tubs quite often, this date in particular takes place in a hot tub store.

Not only are Ben and Caila spending some romantic time inside a store, but they are also joined in the hot tub by comedian Kevin Hart. The date itself is not too uncomfortable because of Ben and Caila’s chemistry, but it is certainly an entertaining concept.

Hannah Brown’s one-on-one date with Garrett Powell in Riga, Latvia is naked bungee jumping! Both Hannah and Garrett seem very surprised and nervous for the date. Even though The Bachelorette star knew about the date, she was still surprised to find out she would be naked.

Hannah says, “I thought I had the upper hand on Garrett because I knew that we were bungee jumping and he didn’t.” She adds, “What I didn’t know is that Latvian people bungee jump naked!”

While the cold weather makes the situation all the more uncomfortable, Garrett takes the opportunity to show Hannah his sweet side. Before they jump, he is comforting and encouraging her and says, “We’ll be laughing about it soon.”

One of Brad Womack’s group dates is a Sports Illustrated swimsuit photo shoot. As each woman takes their turn in front of the camera, the others on the date simply have to watch. Seeing Brad pose intimately on the beach with other contestants is understandably frustrating for them.

While this date may have been a cute idea for a romantic one-on-one, as a group date it just brings out everyone’s insecurities. Chantal O. describes the date saying, “It’s brutal. It’s like, absolute punishment to have to see this.”

In this extra steamy group date, the contestants write explicit love scenes featuring Matt James. Also, they have to read their scenes aloud to Matt and in front of the other contestants.

As the women are reading their very descriptive love scenes to Matt, many of the contestants are giggling and blushing while others watch in disbelief. Describing something very personal to an audience will make anyone uncomfortable, but the women do their best to have fun with it!

On Ben Flanjik’s season of The Bachelor, contestant Courtney Robertson plans a fake wedding as a hometown date. The “wedding” includes rings, vows, and even an officiant.

Also, Courtney chooses to tell Ben she is in love with him during the ceremony. However, since a fake wedding is a strange situation for two people who are not actually getting married, the entire date feels uncomfortable.

This extra spooky date is one of the craziest Bachelor dates ever! On Chris Soules’ season, the women go on a date at night where they are given paintball guns and have to defend themselves against zombies.

Most of the women just try their best, but contestant Ashley S. goes all in on the adventure. Remarking on Ashley’s wild behavior during the date, contestant Jillian says, “Ashley S. is crazy. She’s clearly terrifying everyone because someone gave her a gun.”

Hannah Brown goes on lots of wild and crazy dates throughout her season, but one of the strangest is the animal photoshoot group date. For this date, the guys have to model with animals. From dogs and pigs to snakes and rats, the guys have lots of animals to model with and the photos certainly look interesting.

However, while the men are getting ready for the camera Hannah is behind the scenes. She and Demi Burnette are watching the guys and how they interact with some of the “crew” who are actually actors hired to flirt with the men. Not only is this date a fun and light-hearted photoshoot, but it is also a test of loyalty.

Another crazy date from Ben Flanjik’s season is skiing in San Fransisco. Not only did The Bachelor cover the streets of San Fransisco in snow for a skiing date, but they also made the women wear bikinis.

Considering how many of the women fall down while trying to ski, it seems a little cruel to make them wear bikinis instead of proper ski gear. They definitely walk away from this date plenty of scrapes, cuts, and bruises.

One of the most memorable dates in Bachelor Nation history is the fake Irish Wake from Kaitlyn Bristowe’s season of The Bachelorette. While in Dublin, the men arrive for a group date and are greeted by Chris Harrison who says, “I regret to inform you that the worst has happened. Kaitlyn is dead.”

The Bachelorette star, thankfully not dead, laid in a casket while her suitors deliver pretend eulogies to her. Fighting giggles, Kaitlyn does her best to play dead.

While the group tries to make light of such a sad situation, the date brings up painful memories for Ben who lost his mother when he was young.

While there may be some science behind fragrance and attraction, this date is just awkward. For a group date with Ben Higgins, the women go to a Love Lab and are told, “We’re going to find out if the odors you give off are attractive to Ben.”

Wearing a blindfold, Ben sniffs each of the contestants, describes their scents, and judges how each woman smells. Some of the women he describes as “sweet” while others he says are “a little more sour.”

As a viewer, it is strange watching Ben closely sniff the women, but it must have been much more uncomfortable actually being on the date!

Ashley Hebert’s roast is one of the worst dates in The Bachelorette‘s history. While a roast is supposed to be all in good fun, the guys on the date go too far with their jokes.

Some of the guys decide to roast themselves, but several others poke fun at Ashley’s physical appearance. One of the contestants, Will, even makes a joke about how he wanted a different Bachelorette. He says, “I thought I was signing up to be with Emily or Chantal, and then Ashley’s here.”

Unfortunately, many of the jokes are too much for Ashley and she leaves the date in tears.